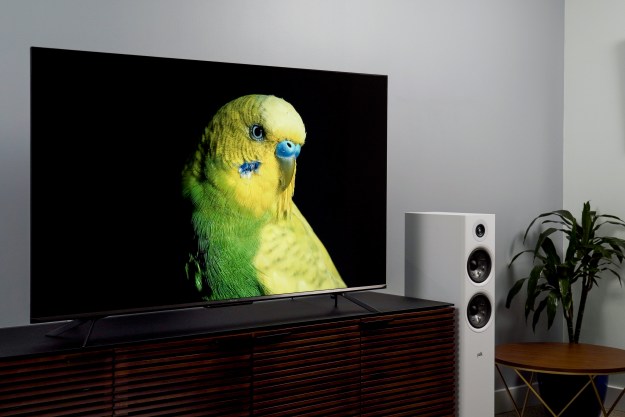 “Dollar per dollar, the U7H is one of the most impressive TVs you can buy.”

I’ve given the Hisense U8H a lot of praise and recommended it as a top pick in its price class. But the ever-so-slightly lesser Hisense U7H reviewed here surprised me so much that I’ve had to spend some time re-evaluating my recommendations. The U7H is so much better than I expected that it has me wondering if it might actually be the better TV pick for most people.

Before we dig in, there are two important things to keep in mind. First, I want to point out that the 65-inch Hisense U8H sells for around $1,000 at the time of writing, while the 65-inch inch U7H is going for about $750. That price gap is worth keeping in mind as we get into this review. I also need to point out that this review is for the U7H as sold in North America; the U7H in other international markets is a completely different TV.

While we reviewed the 65-inch 65U7H model, our review also applies to the 55-inch and 75-inch models.

Good enough to surprise you

If you’re about to upgrade from a non-HDR TV, be it 4K or 1080p, the Hisense U7H’s picture quality is going to impress you. It offers sufficient brightness to deliver impactful HDR highlights and higher color brightness than non-HDR TVs while maintaining deep enough black levels to pull off impressive contrast. The U7H’s out-of-box color accuracy on the sample I received for review delivered shockingly good color accuracy with no adjustment. And while motion resolution was not quite as smooth as, say, the more expensive TCL 6-Series TV, it is still better than most low- to mid-lier televisions. Dollar per dollar, the U7H is one of the most impressive TVs you can buy this year. Below, I’ve detailed some of the measurements I took on the U7H and placed the in context with other TVs I’ve reviewed this year.

I measured the Hisense U7H’s peak brightness in SDR at just over 800 nits. This was in Filmmaker mode with the backlight setting maxed out. In HDR, I measured sustained peak brightness at around the same 800-nit level, 819 to be exact, with peaks coming in just under 1,000 nits. The U7H comes in well under the more expensive U8H in terms of peak brightness performance, and in a side-by-side comparison, it’s clear the U7H doesn’t have quite as much punch in bright highlights and color brightness, but that speaks more to the U8H’s insanely bright picture quality for its price than the U7H, which remains one of the brighter TVs in its price segment.

Bear in mind that I believe 1,000-nits peak brightness is the bar for whether an LCD-based TV really delivers a meaningful HDR experience. An LCD TV’s black levels generally are not as good as an OLED TV panel, so they need a bit more brightness to really sell that HDR contrast.

The U7H has it where it counts.

This leads me to what’s really surprising about the U7H. Unlike the U8H, this TV does not have a mini-LED backlight system. So in addition to lowering expectations around peak brightness, I also had lowered expectations about the overall black level and how much blooming control the TV could exert. But the U7H is remarkably impressive in the backlight control department. It passes our usual torture tests with impressive authority. I was never bothered by blooming — that murky halo of light around a bright object on a black background. There is some here, but it is not distracting. Even off-axis the blooming isn’t as apparent as I’m used to.

The result of the decent peak brightness and good backlight control is a quite-good HDR presentation. Part of that is aided by the U7H’s mostly solid tone mapping, by which I mean that it retains details in the bright highlights well. It’s not as good at maintaining shadow details, but the low-luminance performance is definitely good for a TV at this price and even stacks up well against more expensive TVs.

In short, The U7H has it where it counts.

Now I want to talk about color. I’m not kidding here — I was blown away by the color measurements I got. In fact, the accuracy was so suspiciously good that I did a hard factory reset on this TV, then ran a firmware update, then tested again just to see if I got the same results.

This kind of out-of-the-box color performance is virtually unheard of for a TV at this price.

The results were phenomenal.

In SDR, the color checker errors averaged out below 3, which is technically not perceptible to the human eye — and that was with zero adjustments to white balance. The max error was under 4, so even the worst color error is hardly worth talking about. In HDR, I got the same results.

This kind of out-of-the-box color performance is virtually unheard of for a TV at this price, and in fact, it makes me want to go back and measure the U8H again because I don’t think the more expensive TV performed this well.

As for the white balance on the U7H, I barely had to touch it to get to D65, which is the Hollywood reference standard. In the low color temperature, which is meant to be “warm” it had a little too much blue in it, which is typical. I backed the blue gain down a few points in  SDR and HDR, and the errors were barely over 1. That’s just ridiculously good from a measurement perspective.

When I tested the U8H and U7H, I noted an odd shimmering effect when watching certain high-resolution HDR content on YouTube. The effect is documented in the video at the top of this post. After further testing, I have determined this shimmer is related to the content and not the TV’s performance. While the shimmer effect (as I’ve come to call it) is present on TVs from other brands, it isn’t as apparent. This may speak to a combination of factors, including both sets’ higher brightness, pixel response time, and processing. Given it rarely shows up, I don’t consider this to be a significant enough issue to reduce the TVs’ scores.

In other matters of motion, I feel like without any motion smoothing on, the U7H doesn’t look as smooth and natural as, say, the TCL 6-Series, but then again neither did the U8H, so no real change there. I am curious to see how a 2022 TCL 5-Series might stack up, but that TV has not yet been announced.

The U7H is a remarkable performer across the board.

So, if we package all those numbers up into a takeaway, I think what you need to know is that the U7H is a remarkable performer across the board. Way better than I expected in black levels, contrast, and color accuracy. It lacks the muscular punch you get in the U8H but is otherwise dangerously close in performance to that more expensive TV.

For gaming, the U7H is similarly outfitted as the U8H, with two 4K 120Hz HDMI inputs, variable refresh rate, very low input lag, an auto-game mode, and it lights up all the green check marks on an Xbox Series X. But while we’re talking about unlocking the most potential from your game console or PC, I still don’t like that we have to press this one button on the remote to access the HDMI-enhanced mode to unlock all of those features. Though to Hisense’s credit, when there’s no signal going to one of those ports, there is a message that suggests you do exactly that, although it doesn’t go into which button to push.

The speakers on the U7H deliver sound that is surprisingly decent, especially in the bass, which helps give the TV a much fuller sound than most. It’s not fantastic, but it’s not flat-out terrible either, which is a big bonus. Still, I would definitely look to invest in a soundbar to make this a much better home theater experience.

What’s up with all these ads?

I need to comment on something weird I’ve noticed with both this TV and the U8H. I can’t explain it, but the number of ads I get on YouTube is exactly double that on, say, the TCL 6-Series Roku TV. I haven’t gotten to the bottom of it, it almost seems like a bug. What I do know is that I hate it. If I owned this TV, I would definitely be getting YouTube Premium, no doubt.

When I take everything into consideration, I think we’re looking at a TV that offers almost everything the more expensive step-up model does, except the more powerful brightness. Everything else is practically the same. I think people who really want a super bright TV – and I mean super-duper bright, might be satisfied with spending a bit more for the U8H. But for most consumers, I think the U7H is the smarter buy. I know that the price gap isn’t huge, but it’s nothing to dismiss, either.

The U7H is just so much better than I expected, I think it deserves a lot of attention. If you don’t consider yourself a videophile on a budget and you just want the best picture you can get for your money, I think the U7H is the real value leader right now.