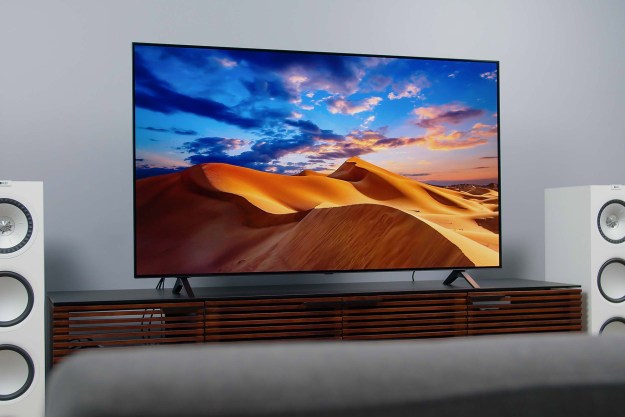 Sight unseen, we gave the LG A1 OLED our Top Tech of CES 2021 award in January. At the time, we wrote: “LG promises the A series will be much more affordable to a wider audience, and while LG won’t talk numbers yet, we’re confident we’ll reach the kind of prices the average family can afford.”

Perhaps our confidence was misplaced.

It turns out that the LG A1 OLED — at the time that I write this seven months later — is just two or three hundred bucks less than the step-up LG C1 OLED I raved about earlier this year, presuming you are looking at 55- or 65-inch models. That’s not the kind of breakthrough pricing I was hoping for when I pitched the A1 OLED to my colleagues over a Zoom call toward the end of what was the world’s biggest virtual tech show. Sure, $300 bucks is nothing to sneeze at, but it’s not a huge premium to ask for when you’re already looking at spending close to $1,800 on a 65-inch TV.

TV prices usually go down toward the end of the calendar year, and perhaps drop even further when the next year’s models come out in the spring, but for now, the prospect of an OLED TV under $1,000 remains elusive.

So, for this review, I think it’s important to learn what you get and what you don’t get with LG’s A1 OLED and, perhaps most importantly, whether the small amount of savings comes with a few sacrifices in design and performance.

Despite a few shortcomings, the A1 OLED is still an OLED TV, and I was quickly reminded of that as I unboxed the TV. It has the same stunningly thin profile you’ll find on the C1 OLED, with a screen that is thinner than any smartphone on the market. Sure, there’s a bump-out on the lower third of the TV where all the electronics are housed, but even mounted to the wall, you still get the “wow” factor from the impossibly thin screen — even if it doesn’t roll up.

The screen isn’t the only part that’s similar to the LG C1 OLED. The entire chassis appears to be the same as the LG C1, with one exception: The A1 OLED has only three HDMI ports while the C1 has four.

The similarities end at the included stand, though. The LG A1 comes with two feet that must be screwed into the base of the TV while the LG C1 comes with a heavy, centralized pedestal-style stand. Still, since the LG A1 shares the same chassis with the C1, anyone who wanted to use the centralized stand found on the C1, CX, or even C9 OLED TVs could if they wanted to — the mounting holes are there. A quick trip to eBay will yield results for LG C-series stands on sale. Just be prepared to pay up for one since shipping is so steep due to the stand’s hefty weight.

Once set up on a stand or mounted on the wall, the TV looks very smart, with its extremely thin profile, bezel-free design, and a hefty amount of anti-glare coating to reduce “mirror effect” from the screen.

The A1 OLED comes with LG’s redesigned “Magic Motion” remote, which is replete with buttons and also allows Nintendo Wii-style motion control of the TV.

The LG A1 OLED uses a 60Hz panel as opposed to the 120Hz panel found on the slightly more expensive C1 model. Generally, display panels with higher refresh rates will offer smoother and more natural motion, especially in fast-moving sports and movie scenes.

The A1 is powered by LG’s A7 Gen4 processor, not the newest, fanciest A9 Gen4 processor found in all of LG’s other OLED TV series. We’ll get deeper into what that means in the performance section.

As previously mentioned, the A1 has three HDMI inputs as opposed to four, and none of them are HDMI 2.1-compliant. The TV does support eARC for uncompressed audio passthrough to other devices, but it doesn’t support other popular features associated with HDMI 2.1 such as variable refresh rate for gaming — that means no G-Sync or Freesync support as well. The A1 does offer LG’s Game Optimizer setting, though, so it isn’t without gaming-friendly features entirely. We’ll get more into gaming performance in the next section.

The TV offers HDR10, HLG, and Dolby Vision HDR support, so it is an HDR TV, but as testing measurements using a SpectraCal VideoForge Pro and C6 meter with CalMan software revealed, the LG A1 OLED doesn’t get as bright as the LG C1 OLED or, as it turns out, Vizio’s OLED TV.

The LG A1 runs LG’s WebOS smart TV system, which recently got a face-lift and is slightly easier on the eyes and simpler to navigate than it was just a year ago. However, I’ve found WebOS to feel increasingly cluttered the more I use it, and its implementation in the A1 OLED proved to be annoyingly sluggish. I often found myself frustrated with the amount of lag between my button presses and the corresponding action on the screen. The system is serviceable for watching Netflix, Hulu, Amazon Prime, and other apps, but I would highly recommend the addition of a Chromecast with Google TV, which will provide a big improvement in experience and responsiveness, though it will take up one of just three HDMI inputs.

The LG A1 sounds surprisingly good considering its slim construction and reduced price. I think most users will find the onboard sound system perfectly fine for daily TV watching thanks to its solid dialogue clarity and decent amount of bass production, though I would always recommend a pick from our list of the best soundbars for a more theater-like experience while watching movies and games.

Since it’s impossible for me to review the LG A1 without comparing it to LG’s only slightly more expensive C1 OLED TV series, I’ll be presenting most of my picture quality observations in that context. However, before I get started down that road, I want to make a few things clear.

As I stated before, the LG A1 is an OLED TV and as such, it comes with a few benefits baked right in. Aside from its stunning good looks, the A1 is blessed to produce perfect black levels. Since the A1 OLED doesn’t have any backlight (each pixel lights itself up), there are no annoying backlight anomalies to put up with. There’s no blooming or halo around bright objects on a black background, no dirty screen effect (blotches on an LCD screen), and no backlight fluctuations (slow brightening and dimming). As such, the A1 OLED has a remarkably clean look to it, with deep, rich colors and an eerily satisfying quality to its image.

The A1 OLED’s response time is also virtually instantaneous, meaning no image blur is ever caused by the screen. Instead, blur you’ll see on the A1 is actually caused by the fact that your eyes can’t keep up with the speed at which the image changes — even on a 60Hz screen like the one found on the A1 OLED.

However, the A1 OLED’s 60Hz screen does rob the TV of the more fluid motion you’ll see on the C1 OLED. Also, the A1 OLED’s A7 Gen4 processor isn’t as refined as the upgraded A9 Gen4 image processor found in the C1 OLED series and above. It would take placing the TVs side-by-side to notice, but the A1 doesn’t do quite as good a job at upscaling low-quality content (low-resolution or low bitrate streaming videos or cable/satellite content) as the C1 does.

But the A1’s real shortcoming is its brightness. While not at all a dim TV, the A1 OLED doesn’t possess the brightness potential needed to really make HDR images pop off the screen. The A1 OLED’s peak brightness measures at about 500 nits while the LG C1 and Vizio OLED max out closer to 750 nits. That’s enough difference for most folks to notice, whether the TVs are side-by-side or not. The A1 just looks less brilliant.

The lack of brightness extends beyond bright highlights and into color and the overall picture. Colors lack a certain sizzle on the A1 compared to the C1, and the overall picture level is a bit dimmer. It’s totally fine (even dazzling at times) in a very dark or very dim room, but even turning room lights on steals a lot of the A1 OLED’s zeal, making it a less realistic TV option for many.

As mentioned before, the LG A1 OLED doesn’t offer variable refresh rate. And even though an Xbox Series X or S will tell you the TV is capable of 1080p resolution at 120 frames per second (fps), the truth is it’s not. The A1 will simply skip every other frame from a 120 fps signal.

The A1 can do 4K HDR at 60Hz, though, and it has remarkably low input lag at about 10 milliseconds in game mode. The A1 also comes with LG gaming dashboard, which allows game genre detection and optimization, along with black and brightness level controls that can make seeing enemies in dark shadows a bit easier in challenging first-person shooter games.

The takeaway here is that the A1 OLED is an excellent TV for most gamers, but those who want to wring the most out of their next-gen Xbox Series X or S would want to step up to the C1 OLED for the best experience.

The LG A1 OLED comes with all of the picture quality benefits inherent in an OLED display and looks quite beautiful in a dark room. None of its drawbacks on their own are deal-breakers, but when the A1 OLED’s individual shortcomings are added together and considered in the context of the very small price difference between it and the step-up C1 OLED, it’s hard to imagine why someone wouldn’t save up for the better TV and pass the A1 OLED by entirely.

Yes. The LG C1 OLED is a superior TV, although just slightly more expensive. The upgrades are worth the added expense, though; you get what you pay for in this case. The Vizio OLED is also a brighter TV available at the same price, but I don’t care for its SmartCast smart TV interface or some of its bugginess. The Vizio OLED is a better overall gaming TV, though.

Given the A1 OLED doesn’t have the latest processor or HDMI connectivity, I think it will feel its age a bit sooner than most TVs. However, from a general longevity standpoint, I would expect it to last for many years to come. I would not suggest an OLED TV to anyone who watches the same news, weather, or sports channel for several hours a day, every day, for months on end, as burn-in is a slight risk with any OLED TV.