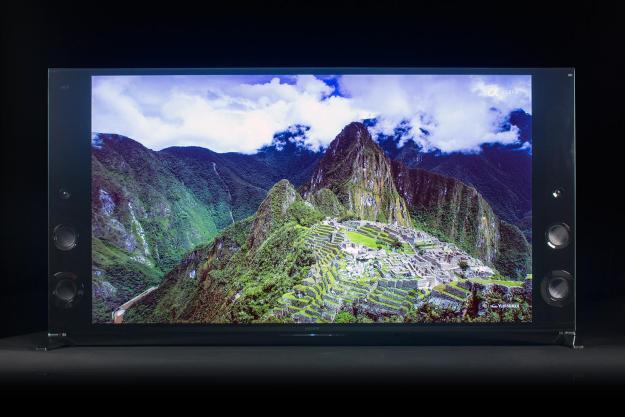 Sony XBR-X900B Series information: This review is based on our hands-on experience with the 65-inch XBR-65X900B TV. However, our observations also apply to the 55-inch and the 79-inch models in the XBR-X900B Series. According to Sony, the 3 sets differ only in dimension and weight and offer identical features and performance.

The last Sony television that really blew us away was the NX720, and that was back in 2011. That isn’t to say Sony hasn’t put out some solid sets since then, but the NX720 set the bar really high, and nothing we’ve seen from Sony since then has evoked as many oohs and aahs.

Sony’s X900B is an outstanding television on several levels. Its picture quality challenges some of the best plasmas we’ve reviewed (which, frankly, we didn’t think was possible), and its built in (or, perhaps more accurately, built on) audio system is, hands down, the best we’ve ever heard. There’s just one problem: the speaker system that makes this television sound so good has a way of turning people off – at least initially. And that’s a shame, because folks could end up passing by one of the finest televisions ever made over one of the elements that makes it so good.

It’s hard to speak to the out-of-box experience here because our X900B review sample arrived in a wooden crate the size of a small NYC apartment. Seriously, we could probably live in this thing. However, we can fairly infer what the experience might be like because the X900B is a stunning TV to behold, no matter how you might feel about the sight of flush-mounted carbon-fiber speakers.

Sony has returned to the invisible bezel design we’ve longed to see return since the NX720. When the television is turned off, it looks like a solid pane of jet-black glass; it’s gorgeous. Rather than square off the top of the television, the upper border rolls back with a sharp radius, giving the display a sort of futuristic look. At the left and right edges, Sony trims the X900B with chrome, which matches its optional legs.

If you don’t intend to wall-mount this TV, then you need to take a very close look at the set’s dimensions. If the X900B is set up with the legs at its extreme edges, the 65-inch model we reviewed will have a 67.62-inch (5.63-feet) wide stance. For that, you’ll need a pretty large entertainment cabinet or credenza. Also note that the TV weighs in at 101.2-lbs., so you’ll need a wall-mount rated to handle at least that much heft.

Along with the television, Sony includes two pairs of its active 3D glasses (not rechargeable), a Bluetooth touchpad remote, a standard IR wand-style remote, the aforementioned table-top stand, a port replicator, IR blaster, and power cable.

As Sony’s second-tier television for 2014, the X900B comes with nearly every feature in Sony’s arsenal, and there’s a lot to take in. You can find a complete list of features and specs at Sony’s website.

Like most other major manufacturers, Sony provides a touchpad remote control in addition to its standard wand. We used this remote for a time, but ultimately hung it up in favor of the standard remote. There was just enough lag between our swipes and the on-screen reaction to slow us down when we were adjusting the set’s picture settings. Once we had the standard remote in hand, we never went back. You might feel differently.

You’ll notice a little camera tucked into the upper left corner of the television for use with apps like Skype. If this TV has a blemish, it’s that camera. We avoid seeing the thing during the day, and although it disappeared into the dark of night, we still knew it was there. Sony informs us that the X900B does come with a small cover for the camera, but it was apparently lost in transit, because we never found it.

The X900B’s most notable core features include 4K Ultra HD resolution (3840 x 2160 up to 60P) with 8-bit color support, local dimming for the edge-mounted LED backlights, Sony’s latest smart TV interface and the dizzying array of apps that come with it H.265 (HEVC) decoding for streaming Ultra HD content (including from Netflix), built-in Wi-Fi and Ethernet, and the option for a wired or wireless subwoofer addition to supplement the on-board speakers. Now, about those speakers…

The speaker arrays on each side of the television are flush-mounted and exposed (no grill available). Each side features a .70-inch tweeter and two 3.14-inch woofers. In order to afford the woofers some air space, the bottom of the TV is flared out a bit, so you definitely do not get a uniformly flat panel – ports are placed at the bottom of the cabinet at the rear. These are all important considerations if a wall-mount installation is intended. The TV does have separate wall-mount and stand-mount audio modes, but we found bass response from the on-board system had more impact when the TV was placed on a stand.

We think Sony’s got the best on-board sound in the business right now.

So, what’s with the big speakers on each side? Well, they exist because Sony clearly wanted this TV to sound amazing, and you can’t cheat the laws of physics. For speakers to work their best and deliver any sort of stereo separation, they need to be separated and fire directly into the room, at the listener. Considering that doing so is challenging from an aesthetic design perspective, we think Sony did pretty well. To be frank, our knee-jerk reaction to the appearance of the speakers wasn’t positive, but over time, we grew to like the look. It certainly is distinct, and once you hear them in action? Wow.

Naturally, a big TV ought to have big sound to go with it. Sony’s audio system delivers that, and it delivers an experience that trumps nearly every sound bar and sound base we’ve ever tested. The sound system’s biggest benefit is stereo separation, which perfectly flanks the TV. We even found Sony’s faux surround sound processing to be pretty effective in our perfectly rectangular room with bordered on all sides by walls. At times, sound effects stretched beyond the TV’s borders, and there was a sense of wrap-around that caught us off guard from time to time, though it was not nearly as convincing as a true surround set-up. Still, with treble that sparkled but never screeched, and far more mid-bass punch than we could ever have hoped for, we think Sony has the best on-board sound in the business right now. And that’s without the use of a subwoofer. Add one in, and you’ve got a cinematic powerhouse on your hands.

To be sure, this television makes the best case for a transition away from the wafer-thin panel standard that manufacturers have a way of trying to outdo each other over. Maybe a TV doesn’t have to look like a window. Maybe it’s ok for it to look like a TV. With that said, we know there are those will not find the look appealing, and that’s really too bad.

For one brief, glowing moment, we had four of the best LED televisions on the market in one room at the same time. Represented were the Samsung UN65HU9000, LG UB9800, Panasonic AX880U, and, of course, the Sony X900B.

We took some time comparing the same Ultra HD material on all four sets at the same time, side-by-side, and if we had to hand out an award to just one television as having the most appealing picture, we’d have to give it to Sony’s X900B.

Somehow, Sony cracked the code for making an LED television look more like a plasma. It pulls this trick off better than any other we’ve seen so far – even Panasonic, which gets very close with its AX880U. This set offers a stunning combination of inky blacks, high brightness, and solid shadow TV, all without any obvious backlight bloom or bleed.

The X900B delivers the sort of picture quality that people crave.

But that’s not all. The X900B’s color is vivid and rich. Out of the box, the set’s color might even be too rich for videophiles who prefer accuracy over the eye-popping appeal of Sony’s signature look. Still, the set offers all the advanced settings necessary for an ISF calibrator to wrangle it into submission.

Naturally, Ultra HD 4K material looked spectacular on the X900B. Shoot, even Smurfs 2 in Ultra HD on Netflix looked dazzling. But, more importantly, 1080p HD content looked incredible, and not just because Sony’s 4K upscaling engine is top notch (it is) but because the X900B delivers the sort of picture quality that people crave, even if they don’t know how to put what they’re looking for (or at) into words. In fact, we’d recommend the X900B even if it wasn’t a 4K TV … its picture quality is just that good.

If you’re looking to get the most 4K content available with your TV right now, Sony is the way to go. The company has some 200 titles available via its FMP-X10 media player, and it does Netflix. That’s a bonus, because Sony’s smart TV interface, while nothing atrocious, doesn’t hold up to Samsung’s or LG’s WebOS interface. It’s navigable, and provides access to tons of apps, but we’d just as soon use Sony’s media player for Ultra HD Netflix, and turn to a Roku for everything else.

Sony’s PlayStation Now is a streaming game service that allows users to rent and play up to 100 PlayStation 3 games without a console. The service went into Beta in late July (just after we began our evaluation). The service looks promising, but we were unable to access the game library on our set. We’re working with Sony on this issue and will update this section once the issue is resolved.

We’re astonished the X900B isn’t Sony’s flagship television … it certainly looks and sounds the part. That this television is able to achieve such excellent black levels and avoid so many edge-lighting pitfalls is a testament to Sony’s engineering chops. We can only imagine what the full-array X950B model must look like.

But, we only need to imagine, because what the X900B pulls off with edge lighting far exceeded our expectations. It’s hard to imagine that the improvements afforded by Sony’s flagship X950B model are worth the extra $4,000. At that price, you could afford an OLED TV, or maybe two! If you’re a bang-for-your-buck sort of buyer, stick with the X900B. You will not be disappointed … as long as you can deal with those speakers (and the price tag).