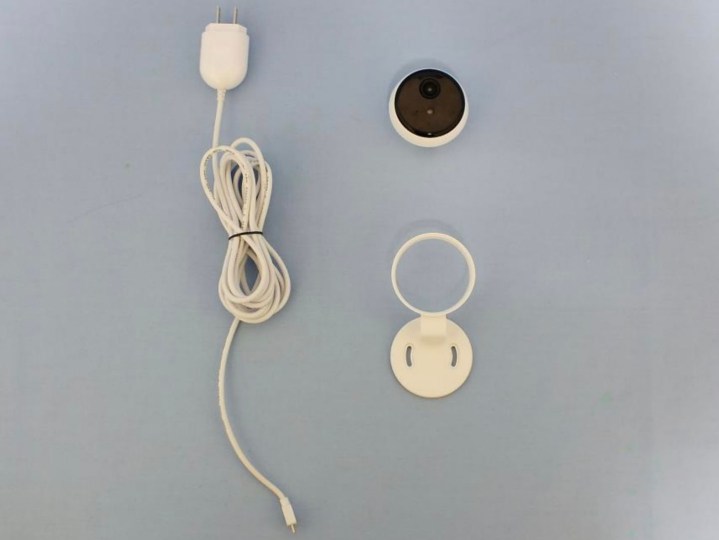 Lenovo may be preparing to release a smart camera to add to its growing smart home line of products, Federal Communications Commission filings indicate. The Chinese electronics maker applied for FCC certification this week for what looks to be a small circular Wi-Fi-connected camera about 2.5 inches in size with an included tilting mount.

Lenovo first debuted its smart home device lineup at IFA 2018 last August, but only the smart bulb and smart plug were released. At the time, Lenovo teased a $100 smart camera, but the FCC filings show a completely different device from the ones the company had previously shown off.

The device also appears to be a rebranded version of an earlier camera that Taiwan-based Sercomm first applied and received certification for in November 2017. That device was a 1080p HD camera with support for two-way audio, 802.11n, and WPS support. The filing says the Lenovo-branded version is “electrically, cosmetically and construction identical,” so the specs would be the same.

The camera pictured in the FCC filing would likely be an entry-level model within any future smart camera lineup. With competition from companies like Wyze, there is more pressure on smart home device manufacturers to offer quality budget-minded solutions. But don’t ask Lenovo’s U.S. arm about it: Our inquiry was the first time they had seen it and were unable to comment (in fairness to them, the filings were from Lenovo employees in China).

FCC filings are not a guarantee that a product will release, but getting clearance is a crucial final step in the process. From what we can tell, Sercomm never released the camera itself and other products were similarly canned at the last minute. With Lenovo’s initial smart camera still missing from its growing smart home lineup, it’s likely that model would release first.

Lenovo hasn’t slowed down on releasing smart home displays, however. Following the release of the Smart Display in July 2018, and both the Smart Tab Android tablet and the Smart Clock at CES 2019, the latter of which debuted early this summer. Cameras only seem like a logical extension to the company’s efforts, so it’s no surprise that Lenovo may be working on several models instead of just one.

Best widgets for the Echo Show 15 for the connected family