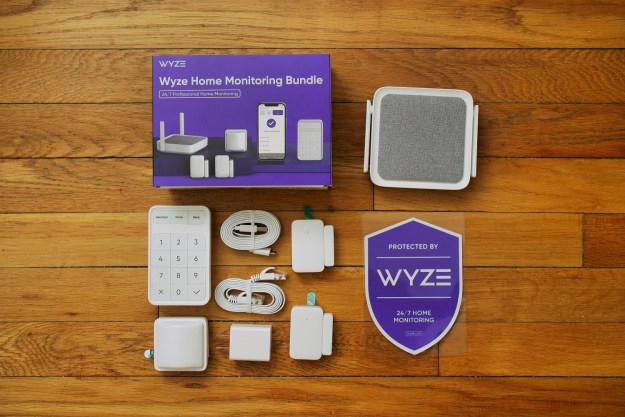 “Wyze has an irresistibly priced home security services, but it needs more work to play catchup.”

When it comes to stirring up some noise in the smart home space, no one does it better than Wyze of late. The company has been relentless in the past year expanding its portfolio, which surprisingly enough now encompasses vacuums, headphones, and fitness trackers. Its latest offering is the Wyze Home Monitoring, a 24/7 do-it-yourself home security system that intends on protecting your home when you’re there or not.

After a run of hits with its security cameras, the Wyze Home Monitoring follows the same strategy of being ultra-affordable. At $5 per month, it’s without question the lowest priced subscription, but are there any compromises at such a low cost?

Let me first break down what comes with the Wyze Home Monitoring system. The Core Starter Kit ($90 MSRP) is what you’d expect, a 5-piece kit that consists of a hub, keypad, motion sensor, and two entry sensors. What’s particularly important to note here is that this starter kit is nearly a fraction of the cost of its closest rivals — between $150 and $200 — for packages from Ring, SimpliSafe, and Blue by ADT.

For the price, you’re getting the same basic components as the other home security systems, so in that regard, it’s more bang for the buck. However, a deep lineup of accessories is always beneficial when it comes to complete coverage of your home. With its current portfolio, Wyze lacks the depth of accessories that its rivals offer. While you can tack on additional motion and entry sensors to the system at a significantly lower cost than what its competitors offer ($20 for three entry sensors and $8 for a motion sensor), it still doesn’t come close to the breadth of accessories you’ll find elsewhere.

Nevertheless, if you’re concerned about someone potentially breaking into your home, slapping additional sensors will help to offer more peace of mind. While external threats are paramount, Wyze will need to add more accessories, such as carbon monoxide detectors, flood sensors, and many more to watch over other potential threats inside of the home.

Tweaks needed with the experience

Wyze’s inexperience in this area is exposed after I checked out its app. Arming and disarming the alarm system can either be done physically with the keypad or through the app, with options for choosing a countdown to give yourself enough time to arm/disarm it. There are three main arming modes: Home, away, and disarmed.

This starter kit is nearly a fraction of the cost of its closest rivals.

As you’d expect when a system is armed, a loud siren is emitted by the hub whenever one of the sensors is tripped. If you have a Wyze security camera, you can set it up as well to automatically record whenever one of the sensors is tripped. For example, if the front door is opened when it’s armed, you can have the Wyze Cam in your living room to automatically start recording. Strangely enough, cameras won’t trigger an alarm on their own if motion is detected and if the system is armed — you’ll get an app notification instead.

Even though the basics are well covered here, there are some additional tweaks needed before it can compare to the major players in this space. In particular, there’s no way for the hub to emit distinguishable sounds whenever a sensor is tripped — including at home. I personally like it when I’m home for a sound to play whenever the front door is opened. You don’t have that option here.

Even more puzzling is that when it’s set to home mode, the system will still sound an alarm and dispatch law enforcement too. Luckily, I had it in test mode whenever it went off, but I would like to see a proper home mode where I can still have the sensors active, but only send me notifications (or play a sound on the hub) whenever they’re activated. Disarmed mode simply disables everything, so there are no notifications or alarms.

The Wyze Home Monitoring offers 24/7 monitoring through Noonlight that will not only sound off alarms when sensors are tripped, but monitoring service officials will also have emergency responders on standby for emergency situations. Considering that the service cost is $5 per month or $60 annually, it undercuts most of the other home security systems out there.

When it comes to protection, though, there are still some gaps that will need to be addressed in the future. Take the Wyze Hub for example. I appreciate being given the option to connect it to my home’s network, wired or wireless, as well as having its own battery backup just in case the power goes out, but it’s rendered useless without an active internet connection at home. Other systems, like SimpliSafe and Ring’s base stations, have built-in cellular connectivity as a backup. In Wyze’s situation, no internet connection means there’s a gap in the coverage.

It’s an okay start, but there’s certainly a lot of work needed before the Wyze Home Monitoring can offer the same sound, complete home security service that its rivals offer. In particular, its accessories portfolio doesn’t make it quite as robust and the experience requires additional tweaks and enhancements. The cost, however, is hard to overlook because you won’t find anything else remotely this cheap.

All the components of the system are constructed out of plastic. It suffices, but the design and build quality is evidently a step behind what you’d get from names like SimpliSafe and Ring. There’s a one-year limited warranty that covers the hardware components for defects.

SimpliSafe and Ring offer two of the most complete DIY home security systems on the market. Ring in particular has one of the deepest rosters for accessories to cover your home inside and out, while SimpliSafe offers impeccable service that goes above and beyond most others — like the ability for a service dispatcher to access a camera to verify real threats.

Yes, but only if you’re in a pinch when it comes to cost. I gather that it’ll get better over time as more accessories become available and enhancements are made to the experience.

Topics
Samsung SmartThings gets Matter support on iOS
Best Amazon Alexa accessories: lights, plugs, thermostats, cameras, and more
The best Google Assistant-compatible devices
The best video doorbells for 2023
Best Smart Plugs: What is a smart plug, and which do I need?
The best outdoor smart plugs for 2023
This Shark cordless vacuum is under $150 — who needs Dyson?
Apple HomePod vs. Apple HomePod 2023
Apple HomePod Mini vs. Apple HomePod
The best robotic lawn mowers for 2023
Blink Wired Floodlight Camera offers heaps of features and an affordable price tag
How to fix an orange flashing light on the HomePod mini
How to set a timer on Amazon Smart Plugs