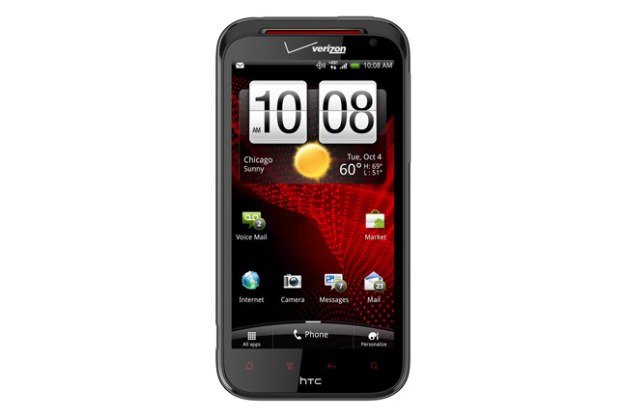 “The HTC Rezound is a decent phone and certainly a solid buy if you're on Verizon, but we can't help but be disappointed with HTCs limited implementation of Beats Audio and the poor battery life...”

Verizon’s 4G LTE network is starting to grow up. The HTC Rezound is the third dual-core device on the new network and HTC’s second. The High Tech Company ushered in the high-speed network earlier this year with the HTC ThunderBolt, which definitely had speed, but lacked a dual-core processor, acceptable battery life, and a competitively thin profile. With the Rezound, HTC corrects most of these problems, but introduces a new one: gimmicky Beats Audio integration that doesn’t really work.

The Rezound is a bit of a revival for HTC. Design-wise, it’s basically a sequel to the Incredible, right down to the red interior. Much like the Incredible, the Rezound has a rubberized black finish with bright red accents all over the phone. The rear also has that oddly shaped top to it with the right corner missing.

There are some differences, starting with the dimensions. With a 4.3-inch screen, this is a larger phone than the Incredible and it’s a bit fatter too, most likely so it can fit in Verizon’s LTE technology and a big enough battery to manage it. It has a shiny faux-metal front exterior and the back rubber backing has texturized ridges in it, making it easier to keep hold of. It also has even more red on it. The navigation buttons—Home, Menu, Back, Search—are now completely red as well, as is the speaker grating up top.

From a usability standpoint, the Rezound is thin enough to hold and operate at 4.3 inches, but it definitely feels a bit thicker than some of the dual-core phones on the market. On one note of annoyance, the power and volume buttons are a bit difficult to press. They are sized appropriately, but they don’t stick out of the phone far enough to easily find them when you aren’t looking. The power button, as the one you’ll press more than any other, is suspiciously uncomfortable to press sometimes.

Like the Amaze 4G on T-Mobile, the Rezound has a Micro USB port that doubles as a fast-charging port, if you use your HTC charger. Unlike the Amaze, however, there is no camera button on the phone, which is a bit of a shame.

Finally, if looking at the inside of your phone is something you like to do, the Rezound will provide hours of staring. The inside of the phone is colored red, much like the Incredible, as is the battery.

The Rezound has most everything we look for in a top-notch smartphone this year. It has a 1.5GHz dual-core Qualcomm MSM8660 processor, 1GB of RAM, 16GB of internal storage, comes with a 16GB microSD card, an 8MP rear camera with dual-LED flash and a 2MP front camera. Bluetooth 3.0, Wi-Fi, accelerometer, and a digital compass are all, of course, present. We ran a Quadrant benchmark test and the unit came out at about what we expected, scoring between 2400 and 2500, or about in line with what we achieved on the Samsung Galaxy Tab 8.9 and a few hundred higher than the Amaze 4G, which is a helluva phone itself. For reference, a Motorola Droid would score about 400 on this processing test and a Droid X or HTC Evo would score a bit over 1000.

The screen is high resolution and nice, but I am hoping HTC invests in AMOLED technology, moving forward. Though Motorola and Samsung have now put their weight behind Super AMOLED, HTC is sticking with LCD displays. The 4.3-inch screen of the Rezound has a 720×1280 pixel resolution, but it doesn’t have the brightness and contrast you get from Super AMOLED. Still, S-LCD isn’t bad and our complaints (if you want to call them complaints) about the display are superficial, at best. Overall, it’s a great, high-resolution display.

Android 2.3 (Gingerbread) is HTC’s OS of choice for the Rezound. The manufacturer has promised an upgrade to Android 4.0 (Ice Cream Sandwich) by early 2012, but there’s no saying when it will actually arrive. Google has released the code for the OS, so hopefully HTC is hard at work on upgrades for most of its devices.

As it stands, the Rezound is a solid Gingerbread phone. It comes loaded with HTC Sense 4.0, a modified user interface for Android that loads the OS up with a bunch of fancy widgets and themes. Though Sense is still one of the better custom UIs, it is starting to show a little wear around the edges. Hopefully with the transition to Android 4.0, HTC will re-evaluate what it really wants to change about Android and figure out how it can better serve users.

Like all Verizon Android devices, the Rezound is preloaded with a fair amount of bloatware that’s unremovable. Expect to stare at icons for BlockBuster, NFL Mobile, Let’s Golf 2, Hot Pursuit, V Cast Videos, and some other apps for the next two years.

What can we say? We’re disappointed. The Rezound is prominently advertised as a Beats Audio phone. It’s supposed to offer up a premium audio experience. That’s the selling point, but we’re not hearing it. The Beats Audio is only integrated with HTC’s custom audio player, and for little good reason. It could have been enabled on every app, but HTC forces users to use its app, which doesn’t integrate with Google Music or any of the other services you might use for Android. HTC has done nothing to make its own music offerings better except integrate itself with Verizon’s media manager. We can think of nothing we’d like to do less than trust a wireless carrier with our music collections.

The Beats Audio, if used in its limited way, does sound good and improve audio, but it comes at a cost. The Beats earbuds that come with the phone are designed to work with the Beats software, so anytime you listen to audio that isn’t tuned with Beats filters, it sounds a bit muffled and distant.

We’re not sure what HTC was thinking, but the hobbled way it has integrated Beats by Dr. Dre has turned it from a great feature to a gimmick.

The Rezound has a pretty good camera, as is often the case with HTC. When compared to most any other camera on a smartphone, it stacks up well. It has an 8MP rear camera with autofocus and a dual-LED flash and 2MP front camera. The camera also isn’t as hyper about refocusing itself whenever you aim at something new, which is pleasant as the Amaze 4G was almost too prompt to refocus a shot.

It does well in the dark and outdoors and the flash doesn’t drain the color any more than usual. We had some trouble taking photos in the New York Public Library, however. The giant room is full of incandescent bulbs and the Rezound couldn’t get a good white balance, instead painting the room far more yellow and orange than it should have been. We took the same picture with an iPhone 4 and a Droid and had no problems with color. This is a shame because other than the color, the HTC picture looked a lot nicer.

Video comes out well and can be recorded at up to 1080p. A new effects menu lets add special effects, like mosaic or black and white, to your videos in real time, instantly seeing how they look as you record. Slow-motion recording is also available and is fun to toy around with. If you’ve ever played with a Talk Boy back when Home Alone 2 came out, it’s kind of like that.

Call quality is decent on the Rezound. We haven’t had any major issues in the Manhattan, New York area. We tested out the speaker phone and joined a conference call as well and had no complaints from those on the other end.

As for data, Verizon’s 4G LTE network is still fast. We are clocking about 8-9Mbps down and 4-5Mbps up, meaning it’s still pretty comparable to the speeds you’re probably getting at home on Wi-Fi. We can’t verify how well Verizon’s network performs outside of a big city like NYC, but the LTE network seems pretty stable and Verizon is adding new cities and regions on a consistent basis.

The Rezound has died on us twice without a good reason. Granted, we let it lie around on idle for a while, but it certainly doesn’t last very long without a charge. The battery life seems about in line with the Droid Bionic, but doesn’t match up to the Droid Razr, which itself doesn’t have great battery life, but can hold a charge throughout the day. HTC has remained pretty mum on the subject of battery life. The phone comes with a 1620mAh battery, which is fairly small for a device with power hungry LTE data connections and a dual-core processor. Still, this is a usable phone. We aren’t talking about a device like the Sega Game Gear that eats up six batteries in four hours. We’ve come a long way since then. Having said that, we watched almost half of the battery drain after streaming a 44 minute episode of Mad Men on Netflix over LTE. So don’t expect to get through a season.

The HTC Rezound is a decent phone and certainly a solid buy if you’re on Verizon, but we can’t help but be disappointed with HTCs limited implementation of Beats Audio and the poor battery life of the Rezound. HTC is one of the best manufacturers on the market, but like the ThunderBolt, the Rezound just can’t hold a charge very well. Though we like the outward design and camera a lot better than the Droid Razr, Motorola’s new phone is a lot thinner, has a nicer screen, and gets unquestionably better battery life (and again, even it doesn’t perform that well, sadly).