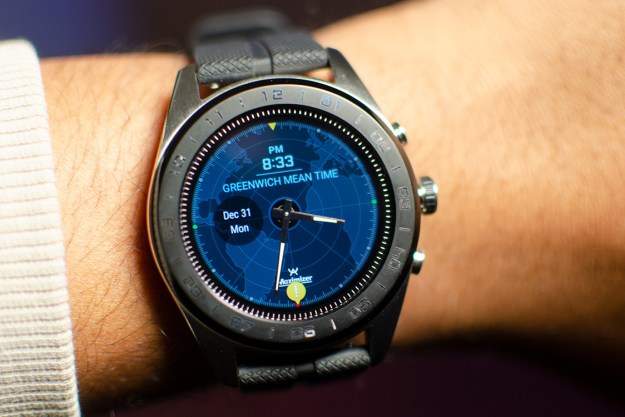 “The LG Watch W7 is a neat idea foiled by flawed execution.”

For years, LG’s smartphones distinguished themselves from the competition with the inclusion of a wide-angle secondary lens. It offered a fresh perspective (pun intended), as well as a way for the company’s phones to stand out from a crowded field. LG often likes to try something different to make a product stand out, and it has done exactly that with its latest Wear OS smartwatch, the LG Watch W7. Unlike almost all Wear OS watches, it comes with mechanical hands layered over the touchscreen. The result is a traditional-looking watch that gives you the time even after it has run out of juice.

Sounds neat, right? That’s what we thought at first, but after using the Watch W7 for several weeks — and seeing its $450 price tag — we’re ready to take it off our wrist and never look at it again. Here’s why.

A promising but flawed concept

LG’s Watch W7 has an always-on screen option, but you don’t need to use it because there are mechanical watch hands run by a quartz movement (made in collaboration with Soprod SA). The hands rest on top of the display, and if the watch’s battery dies or the screen is off, you’ll still be able to tell the time. It’s maintains a touchscreen, so you can swipe around the interface to your heart’s content.

The mechanical hands on the Watch W7 have tangible benefits: The design looks more like a traditional watch than a smartwatch, which is nice for people who want a wearable that’s subtle and doesn’t look “tech-y.” Secondly, you can still tell the time at all times, while reaping the benefits of an always-off screen — longer battery life.

But there are downsides that outweigh these positives. The mechanical watch hands can block text in notifications or other content on the screen, and it  makes notifications show less text on the screen at any given time. LG knew this would be an issue and has a solution: Press and hold the top button on the right side of the watch to shift the screen up, and have the mechanical hands move to either the 3 p.m. or 9 p.m. mark so you can see more of the display. It helps, but the interface isn’t as glanceable anymore, which kind of ruins the point of a smartwatch. We don’t want to have to press a button to be able to read notifications on the watch.

We don’t want to have to press a button to be able to read notifications on the watch.

Still, this approach would have been more acceptable if we enjoyed wearing or liked the design of the Watch W7. We don’t. It looks like a cheap watch funded on Kickstarter. The lugs don’t slope down as much as we’d like, so there’s a small gap between the watch and the wrist. The bezel surrounding the display is littered with sporty-looking numbers and ticks, and while the buttons are clicky, the crown doesn’t rotate as smoothly as it should.

There’s also only one color and size option — a black bezel mixed with a silver case — and it looks dull, very masculine, and it doesn’t help that the 22mm rubber strap isn’t pleasant to the touch. The watch faces available on the Watch W7 are disappointing too, as they’re all rather lackluster. Thankfully, there’s a good deal of customization, and plenty to choose from on the Google Play Store if you don’t find a style you like.

Much of this is subjective, so if you dig the sportier design, there’s a good chance you’ll enjoy wearing this watch on your wrist. And we do have good things to say! The Watch W7 isn’t too thick, and it’s comfortable to wear. The stainless steel case feels premium, and the straps are interchangeable, so you can replace the default one with something flashier or more pleasant to the touch.

But we never yearned to wear the Watch W7, and we never felt happy with it sitting on our wrist, which is unlike our experience with smartwatches such as the Skagen Falster 2. Like regular watches, smartwatches need to make us feel good, and the Watch W7 fails to deliver.

The Watch W7 is powered by Qualcomm’s Snapdragon Wear 2100 chipset (with 768MB of RAM), which is an almost three-year-old processor. Qualcomm unveiled the Wear 3100 chipset a few months ago, and there are a handful of watches using it already. It brings improved battery life and better fitness tracking, and we’d have liked to have seen it in the W7.

The Wear OS redesign Google pushed out this year helped optimize performance on watches powered by the Wear 2100. While we have noticed occasional stutters or lag on the W7, such as when multiple apps are updating, we haven’t run into too many issues. Most people won’t have a problem with how the Watch W7 runs.

The 1.2-inch LCD screen is sharp, with a 360 x 360 resolution, but colors don’t pop as much as on other smartwatches with OLED screens. Thankfully, the screen is easy to see in most lighting conditions.  However, we had trouble reading the mechanical hands at night. The watch hands look as though LG has applied lume to them, but they do not glow in the dark. If you have a watch face with a dark background, it can be even more difficult to tell the time. It’s a bizarre omission, and it led us to swapping watch faces at night just so we could tell the time.

Software and feature-wise, the LG Watch W7 runs Google’s Wear OS, and it’s quite bare. There’s no heart rate sensor, no built-in GPS, and no NFC for contactless payments using Google Pay. It’s purely built for delivering you notifications from your iOS or Android smartphone. The only additions from LG are some “Master Tools” you can access by pressing the bottom button (the buttons are customizable). These include a compass, altimeter, barometer, stopwatch, and timer, and the mechanical watch hands can be used as pointers instead of telling the time.

For the most part, you get the same Wear OS interface you’ll find on other watches.

The app drawer looks a tad different, but you can change the design back to normal in the settings. For the most part, you get the same Wear OS interface you’ll find on other watches. The mechanical hands do block text, as we’ve mentioned, but the place it makes the biggest impact is when you respond to notifications with the keyboard. Swiping the keyboard to type no longer works, and it already makes a cramped experience even worse. You’re better off using voice replies, if you’re comfortable talking to your watch.

With no need for the always-on screen, how long does the Watch W7 last? A satisfactory full working day, in our experience. We’ve often arrived home with around 35 percent by 8 p.m., and the watch has easily reached midnight without dying. It’s a little better than other smartwatches using the Wear 2100 processor, but watches like the Fossil Sport will last a tad longer thanks to the Wear 3100.

With the always-on screen turned on, the watch will hit around 20 percent by 5 p.m., and wouldn’t be able to last much longer if we decided to stay out before heading home.

When we forgot to charge the watch and the 240mAh battery did run out, we were still able to tell the time for at least a full day more. That’s the benefit of the mechanical hands, but the watch is incredibly boring to look at when it there is no always-on screen, or when it’s dead. It’s just the watch hands on a black screen, and it’s a big part of the reason why we have no desire to wear this watch.

If you’re on a trip and forgot the charger, there’s a “Watch Mode” you can use to turn off Wear OS and just use the mechanical watch hands — LG claims the watch lasts up to 100 days in this mode between charges. It’s a handy feature, and several Wear OS smartwatches have something similar already.

The Watch W7 needs to be placed accurately on a bulky puck to be charged, and it takes more than an hour to go from 0 to 100 percent.

The LG Watch W7 costs $450, and it’s available for purchase from Best Buy and B&H. The price has dropped by half since the watch was released at B&H, but Best Buy is still selling it for $450 as of publication.

The LG Watch W7 is neat idea foiled by flawed execution. If LG’s planning a follow-up, it will need more features, a lower price tag, and a much-improved design to survive.

Yes. The Fossil Sport is the best alternative if you’re looking for a Wear OS smartwatch. It sports the latest Wear 3100 processor, which delivers a full day of battery life with the always-on screen, and it has a heart rate monitor, GPS, and NFC all for just $255.

If you want a smartwatch that looks like a traditional watch, the Samsung Galaxy Watch is your best bet. It has a unique rotating bezel you can use to interact with the Tizen interface, and it easily lasts more than two to three days.

If you’re an iPhone owner, we recommend the Apple Watch Series 4. It’s the best smartwatch around, and it has a long feature list that puts the Watch W7 to shame.

The LG Watch W7 will likely last two years. It’s unclear for how long it will receive software updates, but it’s the battery that will start to depreciate over time. The watch is IP68 water resistant, so it can handle the shower and survive in the pool, but LG said it’s “not suitable for swimming or diving.”

No. If you find the watch for the discounted $230 price, it’s worth purchasing only if you like the design. It’s nowhere worth the $450 initial price. We like LG’s efforts to try something different, but the Watch W7 isn’t a smartwatch most people will enjoy wearing.

Topics
Video-editing app LumaFusion to get a Galaxy Tab S8 launch
The best Samsung Galaxy Watch faces for style and utility
The best voice-changing apps for Android and iOS
OnePlus’ new Android update policy matches Samsung, shames Google
First Google Pixel 7a renders show a modern, sleek design upgrade
Fitbit Cyber Monday Deals: Save on Sense 2, Charge 5, and Versa 2
Apple Cyber Monday Deals: Apple Watch, AirPods, iPad, MacBook
Get these JBL earbuds and 4 months of Music Unlimited for $25
How Apple can fix iOS 16’s messy lock screen customization in iOS 17
Spotify Wrapped 2022: what it is and how to view it
Save $225 on the unlocked Samsung Galaxy S22 Ultra with this deal
Samsung Galaxy Z Fold 4 is $350 off — no trade-in needed
We asked the experts if biological sex affects heart rate sensor accuracy