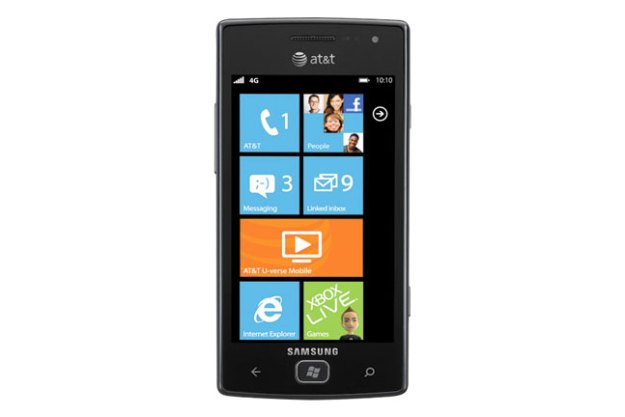 “The battery life hurts, but aside from that, the Samsung Focus Flash performs as well as any Windows Phone...”

Windows Phones haven’t gotten a lot of attention in their first year on the market, but Microsoft has high hopes for the end of this year and 2012. While Sprint and Verizon customers won’t see any action this year, AT&T customers are in luck. Three new Windows Phones are hitting shelves in November, and all three have different screen size and strengths. The cheapest of the bunch is the Samsung Focus Flash, one of two updates of the Samsung Focus, which is one of our favorite Windows Phones on the market. The Focus Flash comes in on the low end of the dollar and size spectrum, with a 3.7-inch screen and a low $50 price.

Like the original Samsung Focus, the Focus Flash looks unique. In a sea of phones that are looking more and more alike, it does stand out a bit from the crowd. Not too much, but it’s sharp edges, physical Windows button, and brushed metal exterior have a certain class to them. At least, to us. You may look at this phone and say it’s ugly. To each his own. What is certain is that the Focus Flash fits well in our hand and feels comfortable to grip, which is more than can be said for some of its oversized, slippery smooth competitors.

Only a few ports and buttons adorn the device. The power button is on the upper right, as usual, but the phone can also be unlocked with the physical Windows (Home) button, which is a neat bonus. The volume rocker is on the left, but is readily available due to the relatively small nature of the phone. It’s quite easy to adjust volume, which is a tough task on some of the huge new 4.3-inch devices. (As an MP3 and media device, we loved the Focus Flash.) The audio jack is up top, and the Micro USB port is on the bottom. That’s about it.

The phone has a solid feel to it. It’s made of plastic, but the construction is solid enough that it looks like it could be metal. There’s a brushed metal cover on the back (at least we think it’s metal) as well. The screen may or may not be Gorilla Glass, but it repels fingerprints quite well.

Unfortunately, Windows Phone doesn’t yet have dual-core processor support. The Focus Flash, for its part, is quite comparable to the new batch of Windows Phone 7.5 (Mango) devices hitting the market. It has a 1.4GHz single-core processor, 512MB of RAM, and 8GB of internal storage (6.75GB of that is usable). Unfortunately, there is no microSD card slot, so those who want to load a ton of media will be out of luck.

The screen is 3.7 inches and has the same 480 x 800 resolution that most, if not all, Windows Phones seem to have. However, The WP7.5 interface looks especially amazing on Samsung phones due to their Super AMOLED Plus display, which has deeper blacks and brighter colors than any other display we’ve reviewed. Since the OS uses a lot of solid colors, Super AMOLED is definitely the way to go. The screen has such dark blacks that it’s fun to just look at it sometimes. We’ve had the Samsung Focus in the office for months now, but still find ourselves impressed by how good it looks with Windows Phone.

Windows Phone 7.5 really fixes up the Windows Phone experience. Thanks to the new features and improvements, we can safely recommend a Windows Phone for almost anyone. There are still things that WP7.5 can’t do as well as Android. The phones aren’t as powerful and there is no LTE support yet, but few apps and games take advantage of those features yet.

The main difference between a Windows Phone and one running iOS or Android is that it isn’t based on a traditional homescreen filled with shortcuts and widgets. Instead, Microsoft gives you an endless and fully customizable homescreen of Live Tiles. A Live Tile is somewhere between a widget and an icon. All Live Tiles are square, and they form a grid. They can display things like the weather, or how many emails you have, or whatever an app maker would like. Most of them animate, making the homescreen quite lively. More importantly though, you can now pin certain parts of apps to the homescreen. We, for instance, pinned some of our favorite bands and podcasts to the homescreen. If you want to pin driving directions to a restaurant or an individual flight time, you can do that. The WP7 start screen is a lot more flexible, in some ways, than Android or iOS.

Like all Windows Phones, the Focus Flash has the same basic build of WP7.5. Manufacturers don’t get to modify the user interface like Android, so you know what you’re getting into. This would be a problem, except Microsoft has done a great job making an interface that rivals iOS as the best looking for mobile. Half a dozen AT&T apps are loaded on the phone, but other than that, everything is pretty standard. Samsung owners have access to a special Samsung section of the Windows Phone Marketplace, which has a few useful apps in it. Overall, the Marketplace doesn’t have the numbers that Android and iOS post, but it holds its own with 35,000 apps, a good selection of games (better than Android, but not as good as iOS), and most top apps like Flixter, Facebook, and Twitter.

The camera is one area where Samsung chose to save some money. It looks like it’s the same basic 5-megapixel rear camera as the original Focus Flash. It’s not bad, and certainly better than a Motorola camera, but it has a slower shutter speed and autofocus than newer Samsung devices like the Galaxy S II. Its performance in low light and color are good, but this is not a phone that can compete with the iPhone 4S or the HTC Amaze 4G. If you want a great Windows Phone camera experience, try the HTC Titan.

720p video can be recorded, but because it’s not dual-core, you won’t be able to do 1080p recording. Again, the camera here is acceptable, but clearly not the focus of the Focus Flash.

We’ve made a number of calls on the Focus Flash and found the audio quality to be great. No one we called had any issues with hearing us. The Windows Phone People Hub and Phone apps are great for dialing and finding friends as well.

As for data speeds, the Focus Flash is able to access AT&T’s HSPA+ 14.4Mbps network. Top phones are able to access the 21.1Mbps speeds. The iPhone 4S, however, is also only able to achieve 14.4Mbps speeds. In actuality, our speed tests showed that we got anywhere from 400Kbps to 1.5Mbps. It seemed to vary, but was generally in line with AT&T’s performance in the Manhattan, New York area.

Battery life is one area where the Focus Flash really disappointed us. Even before we started downloading podcasts, syncing music over Wi-Fi, and heavily using the device, the Focus Flash was barely able to hold a charge for a day and a half. With regular usage, you’re going to have to charge this phone every single night. There are a lot of ways to reduce battery life baked into Windows Phone, so we suggest you take advantage of them. But when compared to fancy phones like the Droid Razr, which gets a reported 12.5 hours of talk time, the Focus Flash just cannot compete. With that said, no smartphones get great battery life and most should be charged every night.

The battery life hurts, but aside from that, the Samsung Focus Flash performs as well as any Windows Phone and costs only $50 with a two-year contract — roughly $150 less than a lot of other high-end smartphones. With that price cut comes a smaller 3.7-inch screen, a weaker 5-megapixel camera, and no microSD slot, but the core functionality of the phone is on par with almost any single-core device on the market. Even with its deficiencies, the Focus Flash is a great bargain.