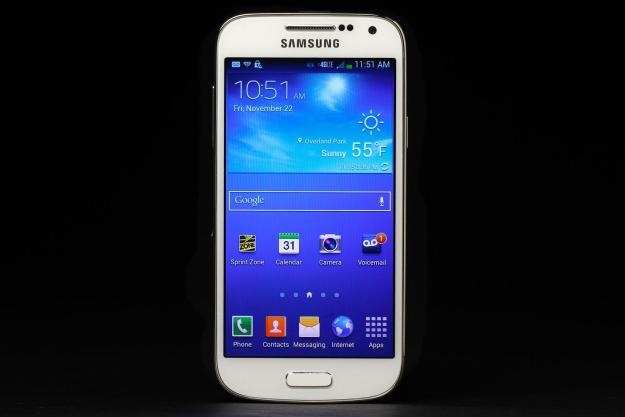 “Samsung’s Galaxy S4 Mini is a decent mid-range Android phone for those who like iPhone-like screen sizes. But unless you’re wedded to the idea of a subsidized phone, there are cheaper options that deliver better performance.”

Android smartphones are certainly getting bigger overall. But there are more than a few smaller-screened Android devices available as well. Not too long ago, we took a look at HTC’s One Mini, with a 4.3-inch screen. And Motorola is preparing to roll out the budget-priced Moto G with a 4.5-inch panel.

Samsung, of course, wants to play ball, too. The company first announced the Galaxy S4 Mini back in May, but it’s finally making its way to US carriers. The S4 Mini has a 4.3-inch AMOLED screen that looks good, but has a lower resolution (960×540) than the competing Motorola and HTC alternatives.

Those on Sprint may find the S4 Mini appealing for its support for the company’s fledgling Spark LTE network. And the price, currently free on contract with Sprint, or $50 from US Cellular, certainly sounds good. But unlocked, it sells for close to $400 – a very high price considering its mid-range specs.

On the outside, at least, the S4 Mini looks nearly identical to the larger Galaxy S4. It comes in white or black with chrome edges, accents, and buttons; and its slick plastic back will make you want to buy a case if you’re even remotely clumsy.

Even the button and port layout on the S4 Mini is the same as on the S4: Power is on the right side, near the top, the volume rocker is on the right, the Micro USB charging port is on the bottom, and the headphone jack and IR blaster are up top.

The only thing noticeably different between the S4 and S4 Mini when you set them side-by-side is that the Mini is slightly thicker, at 0.35 inches, versus the S4’s thinner 0.31-inch profile. But thanks to its smaller size and thicker, more rounded backside, it’s very comfortable to hold.

The physical similarities between the S4 and the S4 Mini carry over to Android as well. The S4 Mini runs Android 4.2, skinned with Samsung’s colorful but cluttered TouchWiz interface.

If you set them side-by-side, the Mini is slightly thicker than the S4.

TouchWiz feels more like standard Android than, say HTC’s Sense interface, but the TouchWiz icons are cartoonish, and the Settings and some other menus can be confusing if you’re coming from a non-Samsung Android phone. Of course, if you don’t like the look of TouchWiz, you can install a different launcher.

We tested the S4 Mini on Sprint’s network. So there are apps and icons for Sprint’s app store (Sprint Zone) and video store (Sprint TV & Movies), as well as a fair amount of other on-screen clutter. The good news is that some of these are really just links to apps that aren’t actually installed on the device. And much of it can be uninstalled, though Sprint Zone and some of Samsung’s apps are baked in.

The most annoying app that comes pre-installed on the Sprint-branded S4 Mini (as well as the HTC One Max) is the Lumen Toolbar. Yes, it’s a toolbar for mobile browsers, which serves up a row icons on the bottom of the window, for “helpful” things like IMDB, Wikipedia, sharing options, and “Offers.” The toolbar takes up screen space unnecessarily, is easy to launch by accident, and can’t be uninstalled. Thankfully, it can be turned off.

While the S4 Mini may look the part of a shrunk-down Galaxy S4, the similarities don’t run any deeper than the shell and skin. The S4 Mini’s components are decidedly weaker than what is in the original Galaxy S4. The S4 Mini has 16GB of on-board storage, plus a MicroSD slot under the battery, which lines up with the similarly sized HTC One Mini.

It also has 1.5GB of RAM, just like the larger Galaxy Mega. But its dual-core Snapdragon 400 processor, while clocked higher than the similar chip found in the HTC One Mini, is much less powerful than the quad-core chip in the original S4. In Geekbench 3, the S4 Mini delivered a single-core score of 630 and a multi-core score of 1126. By comparison, the larger, original Galaxy S4 709 and 2315 on the same tests, respectively.

While the benchmark numbers are helpful for comparison’s sake, the S4 Mini’s anecdotal performance wasn’t great, either. We noticed some stuttering when navigating the OS and launching apps on more than a couple occasions. And the S4 Mini seemed slower at converting our speech to text when dictating text messages than the S4. It also seemed to completely miss more words, even though we used the same wired headset with both phones.

We had better luck hopping on to Sprint’s Spark LTE network than we did recently with the HTC One Max. With the S4 Mini, we saw speeds as high as 14Mbps down, though upload speeds still hovered around 1Mbps. We’re confident that performance on the Spark network will improve as Sprint continues to roll it out. At the moment, you’ll need to be in New York City, Los Angeles, Chicago, Tampa, or Miami to hop aboard the new network.

The 8-megapixel camera in the S4 is about what we’d expect from a respectable mid-range shooter. Images in ideal conditions – sunlit rooms or under bright overhead lighting – look pretty good. But details get blown out easily by backlighting, and interior shots in most lighting conditions look fuzzy.

The good news is that the LED flash works pretty well, at least inside, delivering useable photos in settings that would otherwise be far too dark. We prefer the Ultrapixel camera in HTC’s One smartphones for their superior low-light performance. But as mid-range smartphone cameras go, the S4 Mini’s is pretty good, but not great.

If you’re looking for your smartphone to make it through your workday, the S4 Mini should suffice. But don’t expect to go out for dinner and drinks without a recharge.

Don’t expect to go out for dinner and drinks without a recharge.

Our unit endured for 13 hours 33 minutes of medium-to-heavy use, checking Facebook, writing emails, downloading and installing apps (mostly over WiFi), making a half-hour phone call, and about an hour of gaming, before hitting the 10 percent mark.

That’s a couple hours longer than what we got with the HTC One Mini, but still not exactly great. We were, though, frequently jumping on and off of Sprint’s LTE Spark network. If you stick to 3G, you’ll probably be able to eke out a bit more longevity.

As a compact mid-range smartphone, the Samsung Galaxy S4 Mini is worth considering – especially if you’re on Sprint and looking for a bit of future-proofing with the phone’s LTE Spark network support.

But if we were hopping on a new two-year contract, we’d be concerned about how well S4 Mini phone will perform a year or two down the road. It stutters a bit straight out of the box with its ageing dual-core processor. Websites and apps are, after all, only going to get more demanding.

And while the S4 Mini’s price sounds appealing on contract, you’ll still have to pay about $150 more for the Mini in monthly installments than you’d pay for the Moto G if you buy it outright.

Sure, the Moto G doesn’t support LTE and has no removable storage. But its quad-core processor means the G is more responsive now, and should continue to deliver decent performance for longer than the dual-core S4 Mini. And its screen has a superior resolution (720p).

To put it simply, the Galaxy S4 Mini is a decent mid-range phone at a mid-range price. Its battery life and expandable storage make it slightly more appealing than the HTC One Mini. But the Moto G is a good mid-range phone at a budget-phone price. You can pick up the S4 Mini for less out of pocket than the Moto G. But you’ll pay for it in the long run, both with a higher monthly bill and increasingly sluggish performance as time wears on.