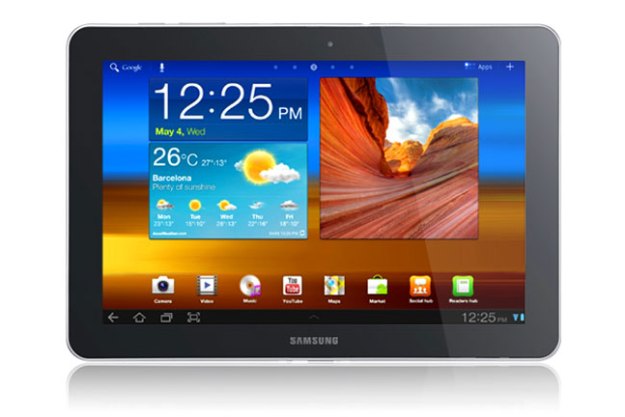 “The Galaxy Tab 10.1 fixes most of the form factor issues we've had with previous Android tablets, making it the best alternative to Apple's iPad.”

The iPad 2 is currently the gold standard for tablets. It’s thin, responsive, and arguably the best looking tablet on the market. Samsung isn’t happy about this, or the fact that the iPad commands an overwhelming majority of the tablet market in the U.S. and abroad. Samsung first introduced its Galaxy Tab 10.1 in February, but after Apple debuted the razor-thin iPad 2, a redesigned and much thinner Galaxy Tab debuted in March at CTIA. The goal was to match or exceed the iPad 2 in all physical ways. The 10.1 was even tweaked again in April to achieve this ambitious goal. They say to beat the man, you gotta be the man. For the day, Samsung is certainly the man. The Galaxy Tab 10.1 is the closest an Android tablet has gotten to matching the iPad in design, weight, and thinness. In some categories, it actually exceeds Apple’s standards.

Samsung isn’t ready to change anything about the tablet form factor, but the 10.1 does perfect it. The final design measures 0.34 inches thick — exactly the thickness of the iPad 2, and a huge improvement over thicker units like the Acer Iconia Tab A500 and Motorola Xoom. Better still, it is actually a bit lighter than the iPad and about half a pound lighter than any other tablet, allowing you to more easily hold the 10.1-inch touchscreen with one hand.

Samsung achieves this thin, lightweight design by cutting a few corners. The 1280 x 800 pixel screen has a wide viewing angle and is still made from Gorilla Glass, with a little less than an inch of black bezel surrounding it, but Samsung has opted to produce much of the unit out of plastic. Replacing the aluminum frame of the iPad is a lighter plastic shell that’s been painted silver to hide its origins. Likewise, the back of the unit, which used to be black, is now covered in a slick white plastic, which tends to get a bit slippery and take on smudges rather easily. Smudges aside, every Galaxy Tab 10.1 comes in all three tech colors: black, silver, and white. Indecisive potential iPad buyers who can’t decide on black or white need not look any further. Samsung is offering all in one.

All-in-one is the motto for ports as well. While most tablets come with a MicroSD slot, micro HDMI, microUSB, and sometimes (thank you Iconia Tab) a full USB port, the Galaxy Tab 10.1 offers none of these. Instead, Samsung has opted for an iPad-like universal port on the bottom (landscape) of the unit. Using this port and separately sold adapters, you can connect most anything you desire. Samsung includes a USB adapter. While we aren’t currently hooking a lot up to our tablets, Android 3.1 does allow your tablet to operate as a USB host for devices like cameras, printers, and keyboards. So if you have lofty connectivity goals, be prepared to shell out a bit extra for the necessary dongles.

A power button and volume rocker adorn the top of the unit, which defaults to landscape. Both are well placed and easy to press, which is a good thing, as you’ll be using the volume a bit more often because of the unit’s twin outward facing speakers, plenty powerful for a tiny tablet and definitely better than the rear-facing speakers on most tablets. After all, who wants their speakers muffled by whatever surface the tablet’s sitting on? A stereo jack is also located up top, if you prefer headphones.

The Galaxy Tab 10.1 is almost a pure Google experience, but Samsung has made a few minor alterations, most of them with good intent. For one, they’ve been listening to Android users complain about the keyboard, and have included a more iOS-like standard Samsung keyboard as default with the 10.1. Gone also are the oddly huge widgets Samsung showed off at CTIA this year, which didn’t seem to add much but slowed the OS down considerably.

In addition to keeping things simple, Samsung’s tablet comes with Android 3.1 (Honeycomb), a much-needed upgrade to Google’s first tablet OS, which shipped on the Xoom in March. The new version looks almost identical, but is streamlined in some small ways, all of which make the experience more enjoyable. While we’re still not huge fans of the Tron-like color palette, the addition of USB host support, resizable widgets, better Wi-Fi networking, support for gamepads, and better support for keyboards is nice. YouTube and other standard Google applications appear to have been tweaked as well, which is nice.

Overall, we found the Galaxy Tab 10.1 desktop to be ever so slightly slower than the Motorola Xoom, which may be the best performing tablet when upgraded to 3.1. This is odd, since both the Xoom and Galaxy Tab 10.1 run very similar specs. The 10.1 runs on a dual-core 1GHz Nvidia Tegra 2 processor, has 1GB of RAM, and comes with either 16GB ($499) or 32GB ($599) of internal storage.

There is very little bloatware on the Galaxy Tab 10.1. Samsung has packed in a few apps, like Pulse Reader, Music Hub, QuickOffice, and a Samsung Apps store, but they’re non-intrusive and useful for those interested. The Samsung Apps store is a bit odd, though. Unlike HTC’s app store, this does not connect up with the Android Market. Instead, you download apps straight from Samsung’s store. Currently there are only five apps and three games available from the store, all of which are already on the Android Market. Until Samsung offers some benefit to downloading from its own app store, we recommend sticking with Google’s, as it should have every app you need. Amazon’s app store has some good exclusive games as well, like offerings from PopCap Games (makers of Bejeweled, Chuzzle, Peggle, etc).

Android 3.1 is also supposed to come with an enhanced browser. We encountered fewer crashes and slowdowns, but we’re still wondering when the Android team will give up and let the Chrome team make their browser. The Android browser is currently as good as anything else out there, but once Microsoft readies Internet Explorer 10 for mobile next year, Google may have some trouble keeping pace.

The Galaxy Tab comes with a 3.0-megapixel rear camera with autofocus, flash and a 2-megapixel front camera (without autofocus or a flash). Though the rear camera is weaker than many of its competitors, including the Xoom, it manages to pick up a lot more color than Motorola’s tablet. Overall, it seems to work well, but Samsung’s custom Camera App is slow at autofocusing and lacks a zoom function at all. It also doesn’t show the Honeycomb menu buttons, which tells us that it may have been ported from Samsung’s Android phones without proper customization.

However, the loss of zoom doesn’t hurt as much after you try out Google’s new Movie Studio app, which offers basic cutting and splicing capabilities, allowing you to easily edit together short movies from your tablet. Though its likely missing a ton of features professional movie editors would demand, its easy to lay down some scenes, transitions, and an audio track. For 90 percent of people, this is more than enough. Movie Studio comes preloaded.

Battery life is a problem on all tablets and phones, but the Galaxy Tab 10.1 keeps up with the best of them, offering about 10 hours of intense use before needing a recharge, comparable to the iPad or any other tablet. We haven’t compared it to another tablet side-by-side for 10 hours straight, but found that Android 3.1 seems to manage resources a bit better than its predecessor. Combined with Samsung’s 7000mAh battery, which has 500mAh more capacity than the Xoom, we have nothing to complain about.

Samsung’s redesigned Galaxy Tab 10.1 might be the best Android tablet around. It is as thin as the iPad 2, and weighs less than any other 10.1-inch tablet. At the same time, it packs a dual-core Tegra 2 processor, a gigabyte of RAM, has an autofocus 3-megapixel camera, outward-facing stereo speakers, and Android 3.1 to boot. Unfortunately, it does have a plastic casing, you’ll have to deal with its one proprietary communications port, and there is no microSD or micro USB support, but at $499 for a 16GB Wi-Fi model, it costs about the same as Apple’s tablet, which has similar restrictions.

Samsung knows its enemy and has targeted the competition quite clearly. The Galaxy Tab 10.1 fixes most of the form factor issues we’ve had with previous Android tablets, making it the best alternative to Apple’s iPad.