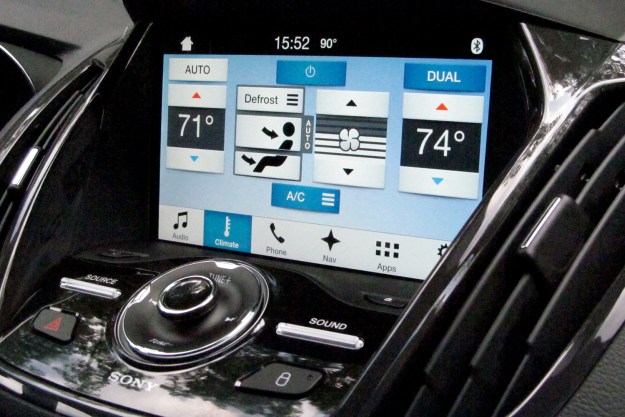 Sometimes criticism is gentle, and sometimes it’s deafening. Ford was one of the first carmakers to market a full infotainment system in non-luxury vehicles, but that doesn’t mean its outgoing Sync with MyFord Touch system attained much love from customers.

Complaints poured in for years from owners and the media about lagging touchscreens, confusing menus, and counterintuitive controls. Multiple updates of the Microsoft-based MyFord Touch system failed to address these issues, so for the 2016 model year, Ford is rolling out a clean-sheet, Blackberry-based system called Sync 3.

To find out if the overhaul was successful, we grabbed the key fob to a Sync 3-equipped 2016 Ford Escape, and took the new system for a spin.

Usability is markedly improved compared to the last version of MyFord Touch. There’s a more balanced division of labor between the center-stack touchscreen and voice controls, and everything has been streamlined.

The home screen defaults to a three-way split between navigation, audio, and phone information, with navigation getting the half of the screen closest to the driver—good for quick glances. Any of these areas can be expanded to full screen with a touch, and there are menus for climate, navigation, and apps, too.

Sync 3 also relies heavily on voice controls, and significant improvements have been made here as well. Most commands have been pared down to short phrases that are at least somewhat intuitive. Overall the voice control works well as a way to get shortcuts through the menus, eliminating some touchscreen prodding.

Without any sort of physical controller, that is something you spend a lot of time doing. At least there are well-placed analog controls for essentials like volume and climate control to supplement the touchscreen.

Sync 3 offers buyers a handful of features beyond the basics of audio, navigation, climate control, and phone functions, mostly as part of Ford’s Sync AppLink. This includes apps that can be paired with the ones on a driver’s smartphone, including Pandora, Spotify, and iHeartRadio.

Using AppLink requires pairing a phone with Sync 3, and then pairing individual apps, a process that’s fairly quick. Once car and phone are in sync (pun intended), AppLink might be a good option for anyone wedded to the specific features of any of its compatible apps, but when it comes to music, it may be easier to just use Bluetooth streaming audio, or perhaps even put the phone away and simply use the radio (satellite or otherwise).

Sync 3 also includes Siri Eyes Free voice recognition, adding a layer of Apple-specific functionality for iPhone users. Ford is one of the few carmakers to not discuss any concrete plans for adding Apple’s CarPlay interface, or competitor Android Auto.

Problems with touchscreen responsiveness were one of the main complaints against the old MyFord Touch system, but it appears Ford has addressed things with Sync 3.

The 8.0-inch touchscreen in our test vehicle never hesitated, responding quickly to every control input. There wasn’t a moment of frustration or any appreciable wait time when changing menus, entering selections, or performing other tasks.

Overall, the touchscreen performed exactly how one would expect it to. Like any other part of a car, touchscreens need to perform flawlessly to the point that users can take their competence for granted. That wasn’t the case with older Ford systems, so the company seems to have exorcised another ghost here.

The graphics for Sync 3 are very simple in design, which may or may not be a good thing, depending on your perspective.

Navigation maps are rendered mostly in light blue, with roads in white and the route being traveled highlighted. Light and blue and white are the primary color scheme for the rest of the menus, too. A thick, sans-serif typeface is used for all of the lettering, with plenty of space around any blocks of text.

When adjusting the climate control or volume, a wheel appears in the center of the screen, overlaying everything else, but only for the moment the controls are being adjusted. It’s an interesting solution, and one that at least avoids the problem of hiding this information somewhere on a crowded screen, or off on another menu.

Sync 3 does not have the most dynamic-looking presentation, but it does excel in a much more important area: making things easy for the driver to comprehend. By getting rid of anything ornamental, Ford made the system much easier to use while driving, even if it makes showing off to friends harder.

Sync 3 may not have all of the bells and whistles of some other systems, but it is good at what it does. Ford had a lot of damage control work on its hands when it decided to move on from MyFord Touch, but Sync 3 looks capable of helping the Blue Oval regain lost ground in the infotainment field, not to mention making the lives of customers who opt for the system easier.