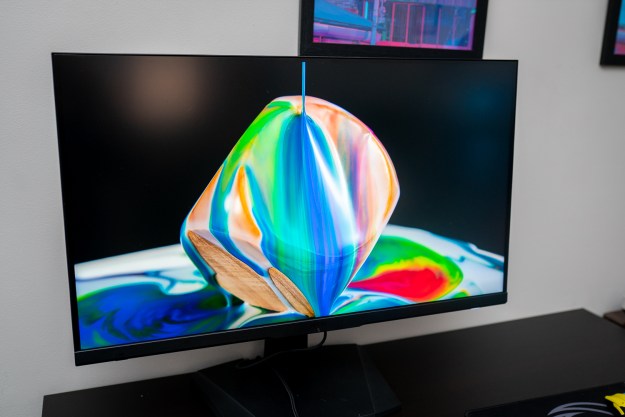 sMonitors are finally catching up to TVs. The old guard of the best gaming monitors isbeing replaced by shiny new displays rocking the latest tech — OLED and quantum dot (QD) among them. Along those lines, MSI’s Optix MPG 32 QD (MPG321UR-QD) brings some new blood to the monitor market with its use of a QD layer to expand color and provide better brightness.

It works, too. You can immediately see what MSI’s cutting-edge display tech is doing, particularly in color-sensitive applications and HDR content. The IPS panel means that contrast takes a back seat, but for a balance of color and media performance, there are few monitors as good as the Optix MPG 32 QD.

The Optix MPG 32 QD is an attractive monitor overall, though a lot of the partying is going on in the back. Looking at the front of the monitor, it doesn’t appear any more attractive than the Gigabyte M32U — that is to say, it’s just a black rectangle.

Butb MSI paid a lot of attention to the back of the monitor. It’s a refined look, especially for a gaming monitor. It has angular strips that reveal a hint of adjustable lighting on the back, as well as a brushed surface. The details are excellent, too. The control stick is gold, as is the MSI shield, and the left side of the monitor has “designed and engineered by MSI” engraved on it.

Certainly, a monitor like the Alienware 34 QD-OLED looks better, but I appreciate that MSI took the time to beautify the back of the display, even if you won’t see it.

For features, the Optix MPG 32 QD has almost too many to count.

Weight and size are a small problem. The Optix MPG 32 QD is massive, and a 32-inch 16:9 screen still feels unmanageable without a curve. The stand is a flat slab instead of two legs, though, which frees up some desk space. The stand offers tilt, swivel, and height adjustments so you can set it up how you want. The adjustment points were a little stiff out of the box, but that’s not a big deal.

For features, the Optix MPG 32 QD has almost too many to count. I’ll touch on all of them throughout this review. For starters, the monitor includes a KVM 3.0 switch so you can easily swap between sources, and it includes a dedicated console mode that locks the display at 4K at 120Hz.

MSI goes beyond the monitor, too. You get a mouse bungee included in the box — useful for plugging your mouse into one of the USB ports on the side of the monitor — and you can download a separate on-screen display (OSD). You read that right: MSI allows you to adjust the OSD with your keyboard and mouse instead of just a joystick.

The Optix MPG 32 QD has an astounding six USB ports, four near the ports on the underside of the monitor, and two on the side, similar to the Acer Predator X28. The two ports on the side are USB 3.2 Gen 1, while the four around back are USB 2.0. You’ll need two separate USB-B cables to get all six of them working.

MSI also includes a microphone and headphone jack next to the USB ports on the side of the monitor. I’m a big fan of having so many USB ports, but MSI only includes one USB-B cable to hook everything up in the box.

The OSD is serviceable when you only navigate it with the joystick. There are a ton of presets, both for gaming and content creation. The gaming presets don’t look great — the frames-per-second preset clips the blacks, while the Racing preset oversaturates the screen. For gaming, I left it at the default preset, which was a perfect balance.

The creator presets are more useful. MSI includes separate options for sRGB, AdobeRGB, and DCI-P3 so you can limit the display to the color space you’re working in. My favorite preset is the Movie one from this section, which is slightly darker than the default preset, with a subtle bump to saturation.

Thankfully, you can ditch the joystick with GamingOSD. This is a piece of software that MSI offers that allows you to control all of your monitor settings with your mouse and keyboard, but I couldn’t get it working. Neither of the USB-B ports would work on the monitor, and you need one of them for GamingOSD.

I’ve reached out to MSI about the issue, and I’ll update this review when I hear back. Regardless, you can still control everything you need to with the joystick.

When it comes to image quality, the Optix MPG 32 QD punches well above its price. It uses a quantum dot (QD) layer above the LED backlight, similar to Samsung’s QLED TVs. There are a lot of technical details surrounding QD displays, but here’s what you need to know: They extend color coverage and brightness.

The big deal with the Optix MPG 32 QD is the color coverage. It maxes out both the sRGB and AdobeRGB color spaces based on my testing, and it covers 95% of DCI-P3. For gamers, thatt means there are vastly more colors available to liven up your games. For creators, the coverage means you can see everything you need to.

This monitor is great for creators.

This monitor is great for creators as a result. The color coverage is a big plus, but color accuracy is even better. I measured a Delta E (difference from real color) value of 0.49 out of the box. For context, a Delta E of less than 2 is what’s typically suitable for color work.

My color tests exposed a weakness of the IPS panel, though: Poor contrast. At its best, the Optix MPG 32 QD only managed a contrast ratio of 660:1, well below what MSI advertises. It carries into color, too. Dark grays showed the largest deviation from true color, though none of them crossed the line for professional color work.

Contrast was a problem, but brightness wasn’t. The Optix MPG 32 QD can spit out about 440 nits, showing off what the QD layer is doing. Unfortunately, the upper portion of brightness is tough to spot due to the low contrast.

IPS panels have a flat look to them, and the Optix MPG 32 QD is no different. The perk of an IPS panel combined with a QD layer is excellent color coverage, even if those colors don’t pop in the same way that other panel technologies offer.

The Optix MPG 32 QD is certified with DisplayHDR 600. DisplayHDR is a certification for HDR on monitors, and the 600 tier is the true entry point. Monitors like the HP Omen 27c offer DisplayHDR 400, which doesn’t really hit the mark for watching movies or playing games.

You can tell the difference immediately with the Optix MPG 32 QD. When you turn on HDR in Windows, you’ll notice a steep falloff in contrast — not what you typically find with DisplayHDR 400 monitors. That lack of contrast continues when watching HDR movies or playing games, but the tone mapping is excellent.

I tested Guardians of the Galaxy and Ori and the Will of the Wisps for gaming, along with a suite of HDR demos from LG. Between all of them, I never noticed a major difference in contrast between turning HDR on or off. I did, however, find much more vibrant and accurate colors. With HDR off, things like the bloom of the sun would wash out a scene. With it on, that bloom behaved like it would in real life.

True to the certification, the Optix MPG 32 QD is an entry point into HDR, not the final destination. It helps a lot with tone mapping, but the contrast isn’t any more impressive than SDR. That’s what you get with an IPS panel. I don’t want to undersell just how beautiful the colors are, though. Sure, this monitor doesn’t offer the contrast you’d find on a VA or OLED display, but its vibrancy and accuracy more than counteract that.

There isn’t much surprising about the Optix MPG 32 QD’s gaming performance. A 144Hz refresh rate, G-Sync compatibility, HDMI 2.1 for consoles, and fantastic HDR color response — these are all the makings for a great gaming monitor.

Still, MSI goes further. The USB hub and mouse bungie are both welcome additions, and MSI includes a KVM 3.0 switch. You can seamlessly switch between a console and PC or multiple PCs, all without worrying about swapping your peripherals. The Optix MPG 32 QD includes a dedicated console mode to lock the HDMI 2.1 ports to 4K at 120Hz. Even better, the HDMI ports support variable refresh rate for the Xbox Series X.

MSI considered everything when it comes to gaming.

MSI considered everything when it comes to gaming. So, how does that shake out in the experience? I played a suite of titles on the Optix MPG 32 QD, and they all looked great. Ori and the Blind Forest and Guardians of the Galaxy showcased excellent HDR color response and vibrancy.

The same is true in SDR. The colors are fantastic, but the contrast is a little flat. There are some cases where that’s a good thing, particularly in competitive shooters like Rainbow Six Siege and Valorant. In more cinematic experiences like Cyberpunk 2077, the Optix MPG 32 QD produces great color, but images don’t pop off the screen like they do with the BenQ Mobiuz EX3410R.

The Optix MPG 32 QD tries to do a lot, and for the most part, it succeeds. But if you want to focus more on cinematic games or movies, there are monitors that offer better media experiences (though at the cost of color accuracy and coverage).

The problem is that you can’t find it in stock right now. It’s a new product, but I’ve seen how these gaming monitors work time and again. You’ll have to do some hunting to find  Optix MPG 32 QD, and even more so to find it at list price.

MSI’s Optix MPG 32 QD strikes a balance between color and gaming performance in a way that few 4K monitors do. The inclusion of a QD layer elevates the display beyond its competitors in color coverage and accuracy, though it comes at the cost of high black levels and decreased contrast.

It’s a jack-of-all-trades monitor, perfect for the gamer who also wants to create. Contrast is a slight issue, but MSI took this IPS panel further than most other monitor makers tend to.

LED panels usually last a decade or more, so you don’t need to worry about the Optix MPG 32 QD giving out on you any time soon.

Yes, especially if you game and handle color-sensitive work. There are better options for contrast, but not many of them include useable HDR like the Optix MPG 32 QD does.