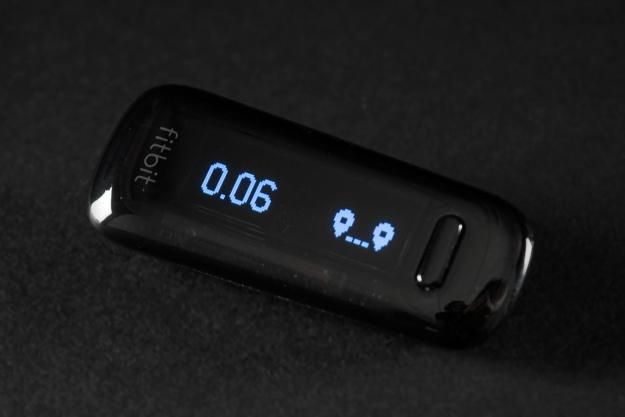 “If you want to track your fitness without a neon bracelet glowing around your wrist, Fitbit’s One offers all of the benefits with a dose of subtlety.”

Well before Fitbit became the world’s best-selling maker of fitness bands, and prior to its Force wristband being recalled for reportedly causing serious skin irritations, Fitbit started with one humble bit of fitness tech: the Fitbit Tracker. It was a small, multi-dimensional accelerometer that could be clipped to a piece of clothing and record steps taken. With that info, Fitbit could extrapolate calories burned and distance traveled.

It was small, light, and easy to hide, but it didn’t loudly communicate the desire for self improvement the way brightly colored wristbands trackers do today. It didn’t make that statement because no one could see it. It was tucked away, doing its job, and not making much fuss and it was a favorite of fitness data pioneers.

Now that fitness bands have become seemingly ubiquitous, it’s good to know that Fitbit still makes a subtle tracker that doesn’t shout “quantified self” from across the room. It’s the latest version of the company’s original product, and it’s called the Fitbit One. Now that the Force is gone, we thought it would be the perfect time to take a look at what remains Fitbit’s most feature-rich, stealth, fitness tracker.

The Fitbit One features sleek, shiny, futuristic design that combines a MEMS 3-axis accelerometer, an altimeter, a vibration motor, an OLED display, and just one button into a 1.89 inch long capsule that slips smoothly into a detachable silicone enclosed metal clip. It comes in two subdued colors: burgundy and black.

By pressing the One’s only button repeatedly the bright blue OLED display scrolls through several metrics including time of day, steps taken, calories burned, stairs climbed, and occasionally it offers encouraging personalized comments designed to keep the user moving. The One communicates with Fitbit’s popular iOS app via Bluetooth (4s or newer and iPad 3rd gens, but no Android just yet) and to the Fitbit.com website via a wireless USB dongle on desktop computers. When connected, all the info shown on the One’s OLED display can also be viewed on an iPhone (or desktop computer) without even having to touching the One or remember which pocket it’s attached to.

Fitbit has provided everything needed to track steps, stairs climbed, and sleep in the box. This includes the One, a silicone and metal clip for attaching the tracker to clothing, a small USB dongle for wirelessly syncing with desktop computers, a USB charging cord, and a cloth wristband for use during sleep tracking.

We were already fans of the Fitbit Flex wrist-based tracker before we tested the One, so setting it up was as simple as adding a new device to our Fitbit iOS app. But it’s nearly as easy for those new to the Fitbit ecosystem. After downloading the Fitbit app for iPhone from the App Store, you simply click the “Join Fitbit” button and follow the onscreen prompts. After choosing the One from the list of Fitbit trackers, a four-digit code will appear on the One that is entered into the app to pair the device with Fitbit. Users are then prompted to provide a few pieces of personal info so Fitbit can “get an accurate picture of your activity.” These data points include height, gender, weight, age, along with a name and email address. After that everything is set.

Those who don’t have an iPhone 4S or newer or supported Android phone, or prefer signing up on their computers, can use the included USB dongle to connect the One to their home computer wirelessly at Fitbit.com. There, users are directed to download a Fitbit installer for the One (Mac or Windows) that takes users down a similar path to signing up. With the USB dongle installed, the Fitbit app will automatically upload the most recent fitness data to the computer in the background anytime the One is in range of the computer. With this system running, the only task left for the user is to charge the One every four or five days.

The Fitbit iOS app and website both collect a variety of fitness data from the One tracker, but they also allow users to create a log of other metrics as well. Details like weight, goal weight, water intake, and food eaten are easily entered. For food, Fitbit includes a database of popular brand-name products along with their caloric values. With this info, Fitbit can give users feedback on how many more calories they can eat during the day if they expect to reach goal weight.

After wearing the Fitbit One for over several weeks, we discovered that for simply tracking steps, calories burned, and stairs climbed, the Fitbit One is our favorite fitness tracker. Because of its small size, it can be clipped to nearly anything (belt, pants, pocket, bra) and left there all day unnoticed. Because the One is attached closely to the body and not the wrist, it seems to be more consistent at tracking steps than a wrist-based tracker. While pushing a stroller or a shopping cart, we weren’t worried that the One wasn’t counting each of our steps like we do when we’re wearing a wrist tracker. And having a wrist free for a watch (or for nothing at all) felt almost liberating after living the past four months with a fitness wristband on 24-7.

The one downside to having a tracker that is so easy to clip and forget … is that it is very easy to forget. Fitness-tracking message boards are loaded with stories of people who forgot to remove the One before throwing their clothes in the washing machine. Luckily, this didn’t happen to us, but we were constantly worried about it. The One is not waterproof and we know from experience that trackers are easily ruined by being dunked. Don’t ask.

Having a wrist free for a watch (or for nothing at all) felt almost liberating after living with a fitness wristband on 24-7.

The One is great at staying hidden away and tracking steps, however, when we wanted to do anything else with it, things got tougher. The One has a beautiful, blue OLED display that makes reading data on the fly simple. The problem is that getting the One unclipped to read what’s on the display was never easy for us. The clip grips like crazy, and that’s fine most of the time. But when we wanted to check the time, or our steps, removing the One from our pocket became an operation that often required both hands. This is obviously the downside of a tracker that stays put, but it rendered the digital display functionally useless. Over time it seemed much easier to pull our phone out to check the stats via Bluetooth than it was to pry the One free from the edge of our pocket or waistband.

Then there was the sleep tracking. The Fitbit Flex is currently our favorite sleep tracker, and we found that the One offers very similar sleep tracking results. However, to get the One properly tracking sleep, it has to be removed from the silicone clip enclosure and slipped into the provided cloth wristband. The One slides easily into the strap in much the same way you would use two fingers to drop a coin into a coin slot. And the band is comfortable, but it looks more like an old-school blood pressure cuff than a sleek piece of technology. It’s also one more item that must be planned for before getting into bed. We found ourselves repeatedly getting into bed without the One. To solve this problem we had to starting running through a series of questions before dropping into bed: Where is the One? What pair of pants was it attached to? Where is the wristband? Is it nearby? Do I really have to get up and walk across the room and get it now that I’m about ready to fall asleep? The answer to the last question more often than not was “No.” And we’d end up not tracking our sleep, which obviously defeats the purpose of sleep tracking.

The Fitbit feature we enjoy most is the programmable vibration alarm. And the One has it. Up to seven alarms can be set and programmed to repeat on any or all days of the week. Once we got used to being quietly tickled awake, it’s hard to imagine being blasted awake by an audible alarm, especially when sleeping with someone who is on a different schedule. When the One is in the sleep wristband, the vibration alarm works great. It’s during the day that we found the alarm to be less dependable. It’s not the alarm’s fault. It’s just that the place the tracker was clipped in our clothing wasn’t always situated well to feel the vibration alarm going off. After using the Fitbit Flex to remind us of nearly everything we have to do each day, it was a little stressful to think that we may miss something simply because we couldn’t feel the alarm.

If all we wanted to do was track steps, calories burned, and stairs climbed, the Fitbit One would be our favorite tracker. Those not interested in easily tracking sleep or relying on vibrating alarms to alert them during the day (and night) will find the One a great piece of fitness technology. It’s small, light, attractive, and it works. And yes, it will track sleep for those who have the tenacity to remember to strap it on every night. But for us, the overhead was too high to get much sleep tracking done, and not being able to feel the vibrating alarm half the time made us worry that we were going to miss an important event.

More than anything, testing the One made us realize how much we loved the recalled Force. It took all the features of the One and placed them on the wrist. With the Force, Fitbit had the market covered. The One is for people who want a low-key pocket tracker, and the Force is for those who want to flash their fitness tracking on their wrists.

We’ve heard rumors that Fitbit has fixed the problems they had with the Force, and that they will be relaunching something similar soon (with full iOS notifications included). Depending on your current fitness-tracking situation, that may be worth waiting for. In the meantime, the One remains Fitbit’s premiere tracker, and one that will not disappoint anyone interested in staying in motion. Especially for those who want to do it on the sly.

The Fitbit One retails for $100 and can be purchased from Fitbit.com or from most major electronics retailers anywhere.

Update: An earlier version of this review incorrectly stated that the Fitbit works only with iPhones. The review has been updated to note that an Android app exists as well.

Video-editing app LumaFusion to get a Galaxy Tab S8 launch
Huawei’s Mate 50 Pro is here with an insane 200x zoom
Best iPhone deals and sales for September 2022
Experts say the iPhone 14’s satellite feature may have a dangerous side effect
The best touchscreen laptops for 2022
OnePlus 11 Pro leaked specs predict a zooming disappointment
How to turn off your iPhone 14 Pro’s always-on display
Does the iPhone 14 Pro have a battery life problem? It sure looks like it
Your guide to the best e-book readers for 2022
How to delete lock screen wallpapers in iOS 16
iPhone 14 Pro vs. iPhone 13 Pro camera battle isn’t as close as you think
The best gaming tablets for 2022
Samsung’s new rugged phone and tablet tout 5G and 5 years of updates