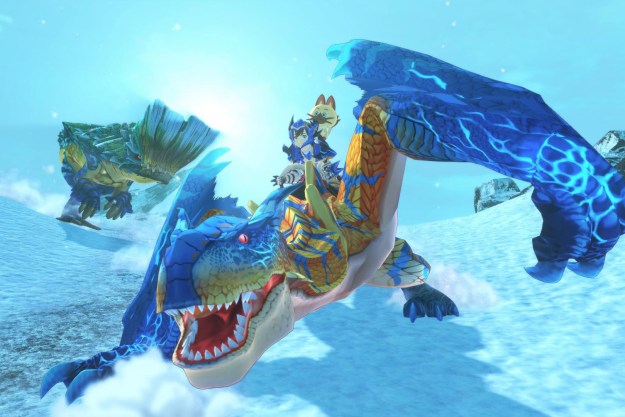 “Monster Hunter Stories 2 is a much friendlier introduction to the complex franchise, anchored by excellent turn-based RPG combat,”

Monster Hunter Stories 2: Wings of Ruin is the perfect entry point for newcomers to the series. No, really.

That statement has become a bit of a meme in recent years as Monster Hunter fans paint each new release as “accessible.” Monster Hunter Rise came close to making that a reality, but the franchise’s cornerstone complexity and headache-inducing interface still make it an intimidating experience for total newbies.

By comparison, Monster Hunter Stories 2 is much more digestible. It features many of the same basics, but presented in a simplified manner that’s easier to parse. Even though it’s a completely different experience — a turn-based, Pokémon-like RPG instead of a hacking-and-slashing action game — it explains the fundamentals of the franchise much clearer than Monster Hunter World or Rise.

Monster Hunter Stories 2: Wings of Ruin is a friendly alternative to the franchise’s usual grind. Even with some repetitive level design, it offers up an excellent combat system, a compelling story, and a deep endgame that make it a perfect RPG for anyone who’s looking for a more laid-back hunt.

On its surface, Monster Hunter Stories 2 seems like an entirely different beast. The game is a sequel to a Nintendo 3DS game that puts players in the role of a monster rider, not a hunter. The main difference is that riders befriend and work together with monsters. That gives the game a Pokémon-like gameplay loop where players collect and raise monsters, keeping six on them at a time.

For Pokémon fans who have been let down by the franchise’s continually decreasing difficulty, Monster Hunter Stories 2 is an excellent alternative. The monster-collecting hook is addictive, giving players tons of creatures to discover. The Rite of Channeling feature acts as a sort of breeding mechanic that lets players pass one monster’s trait on to another. It’s a deep system that opens up limitless possibilities for team building.

Granted, there is some cognitive dissonance to the experience. While it’s a sweeter concept compared to the standard hunting loop, it takes a bit to get past some initial discomfort. Players essentially kill (or beat the snot out of) a monster, break into its den, steal one of its eggs, and raise the baby as their own. For those who’ve found Monster Hunter’s colonization undertones difficult to swallow, this version certainly presents some tougher moral discomfort upfront.

For Pokémon fans who have been let down by the franchise’s continually decreasing difficulty, Monster Hunter Stories 2 is an excellent alternative.

Despite that, the game did ultimately win me over with its intriguing story — something that escaped Monster Hunter Rise. It’s a sprawling narrative that explores the different ways people and societies have chosen to interact with monsters, whether through peace or violence. That’s all tied together by a mysterious, lore-rich story where players must uncover what’s making monsters act erratic all over the continent.

The game sports a wonderful aesthetic, too, with vibrant colors and high-quality cinematics. At times, it feels like watching a Monster Hunter anime, with thrilling action sequences and dazzling battle animations. The game’s frame rate unfortunately stutters on Switch, but every time I booted it up, I found myself fully lost in a colorful and richly detailed world.

The core hook of the game is its fantastic turn-based combat system. Monster Hunter Stories 2 employs a Fire Emblem-esque “rock, paper, scissors” mechanic for battles. Players have three types of basic attacks: Power, technical, and speed. In fights against monsters, players need to predict what type of attack a monster will unleash and counter it with one of their own.

That works as well as it does because the game gives players the right tools to solve that little combat puzzle. Each monster uses a basic attack type, but might switch to another if it gets enraged. By the end of the game, I could look at a monster I’d never seen and deduce how it would attack based on the way other creatures behaved. It rewards players who think like a rider and really take the time to observe and remember how nature works.

Despite being turn-based, battles stay true to the basics of Monster Hunter in clever ways.

Monster sidekicks play an important role in battles, too. Each breed has its own basic attack type, so players need to build a party that covers all the bases. Swapping in a new monster midfight doesn’t burn a turn, which gives players the flexibility to adapt to a new battle and not worry about bringing a Pukei-Pukei to an Anjanath fight.

Creating the perfect team goes much deeper than that, though. Monsters can learn a variety of skills, from elemental attacks to teamwide buffs. That gives players a strong reason to continually seek out new creatures and experiment with the Channeling mechanic to broaden a creature’s tool kit.

Battles are less about micromanaging teammates and more about maintaining a bond with a monster. Perform the same attack type as a companion and the duo may execute a combo attack that dishes out more damage. Actions like that increase a kinship gauge, which can be spent to perform specific skills. When the gauge is full, a player can ride their monster to deal out devastating attacks complete with dazzling animations. Little systems like that made me feel genuinely close with each of my pals, really selling the rider concept.

Despite being turn-based, battles stay true to the basics of Monster Hunter in clever ways. There’s a variety of weapon types, which have their pros and cons against certain monsters. Players can easily target specific monster body parts in battles to knock off valuable crafting parts for armor and weapons. It all feels streamlined compared to a game like Monster Hunter Rise, which buries systems like that in walls of tutorial text or inscrutable UI. I found myself learning basic ideas that I never quite grasped in Rise here.

Of course, it’s a completely different type of game, so it’s not entirely fair to compare the two. Monster Hunter Rise is an excellent action RPG that thrives on complexity. Monster Hunter Stories 2 is a more controlled, tactical experience. Each is a perfect fit for the kind of story it’s trying to tell; it’s just a matter of what speed you prefer.

What’s especially impressive about Monster Hunter Stories 2 is how much content is packed into the experience. Mainlining the story will take 30 hours, but there’s so much more depth beyond the main story. Sidequests, arena battles, royal monsters, and an entire post-launch road map add a ton of reasons to dig in deeper. In the middle of my playthrough, I just started throwing music on in the background and kicking back for some monster-collecting expeditions.

There’s multiplayer as well, both in the form of co-op play and PvP battles. The latter offers the game some serious long-term potential, as it gives players yet another reason to engage with the game’s collecting and breeding mechanics to create stronger monsters with unpredictable skills.

It’s a repetitive game, though that’s just as much a part of Monster Hunter as giant swords.

While there’s no shortage of things to do, it can wear thin at times. Long fights against powerful monsters tend to drag on, though combat can be sped up to three times speed. Monster dens and explorable areas take cues from dungeon crawlers. That means that levels can be a somewhat bland string of narrow passages leading into open areas. By the end of the game, I was noticing rooms that were identical to areas I’d seen time and time again, despite being on a different part of the island entirely.

It’s a repetitive game, though that’s just as much a part of Monster Hunter as giant swords. The series invites players to learn complex routines and settle into a flow. The key difference in Monster Hunter Stories 2 is that it all builds to an actual end point, as opposed to continuing on as a Sisyphean live-service grind. There’s a mystery to uncover and one big bad to slay at the end of the day.

That change of pace allows players to experience the world and ideas of Monster Hunter without the intimidating commitment, which is a big plus.

Monster Hunter Stories 2: Wings of Ruin is a top-notch spinoff that cleverly distills the complexities of Monster Hunter into a friendlier RPG. Rewarding combat and a thoroughly entertaining story make up for repetitive map design and a stuttering frame rate. For those who found Monster Hunter Rise too intimidating, this is a better way to get a grasp on the basic ideas in a less demanding, turn-based format.

Monster Hunter Rise might be an overall stronger game, though it’s an entirely different animal.

The story takes 30 hours minimum, but dedicated players can spend dozens of extra hours exploring the world. That’s not even including the game’s upcoming content.

Breath of the Wild 2: release date, trailers, gameplay, and more