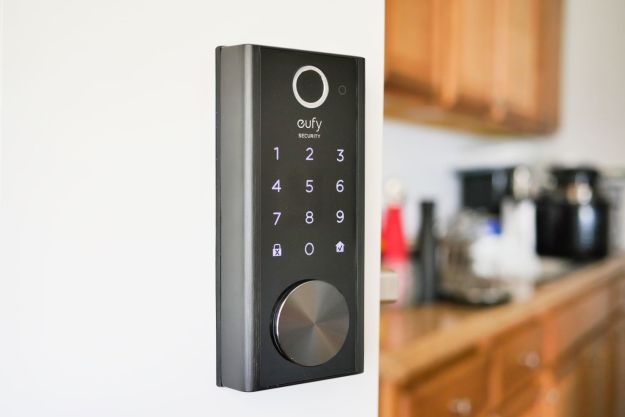 “The addition of Wi-Fi brings this smart lock to the same level of its rivals.”

Eufy’s been on a tear in the smart home market over the last year. So far, its line of products have proven to strike a balance between features, performance, and price as the company has tackled everything from robot vacuums to security cameras. Now, Eufy’s breaking into the world of smart locks.

Enter the Eufy Security Smart Lock Touch, which looks like it means business. What’s a bit surprising is its price, which at a hefty $250 seems like a bold statement for a company that has taken pride in budget pricing for many of its devices. Is it worth that premium price?

Here’s the first thing you should know. To use Eufy’s smart lock, you’re going to have to replace the entirety of your existing deadlock. I wasn’t too thrilled by this, because it means replacing my existing set of keys. Even if you’re versed in installing smart locks, like myself, you may find the installation process tedious.

The entire installation process from start to finish took me 30 minutes. That’s more than double the time I needed to install the SimpliSafe Smart Lock and Level Lock, both of which let you use your existing lock.

Why does it take so long? There’s a mounting plate on the inside of your door to accommodate the interior assembly that houses the batteries and lock switch. Positioning and assembling it isn’t a challenge, exactly, but it is a bit finicky.

The entire installation process from start to finish took me approximately 30 minutes.

I will admit the Eufy Security Smart Lock Touch has an intimidating presence to it. The design includes a metal frame, shiny plastic accents, and a prominent fingerprint sensor. Seams are barely visible on the exterior assembly, while the keyhole is protected by a metal covering. The digital keypad appears invisible to the eye unless it’s touched, which activates the backlight.

There’s little concern about its durability because it features an IP65 weatherproof rating, so it’ll be able to withstand extreme temperatures and weather conditions.

Even though it’s powered by four AA batteries, there’s a Micro USB port tucked on the underside of the exterior assembly that can be attached to a power source. That’ll be useful in the event the battery is depleted and you don’t have the physical keys on you. The battery is rated for one year, and so far it’s still showing all five bars after two weeks of using it.

With the updated version with built-in Wi-Fi, it features a rechargeable 10,000 mAh  battery that gives it enough juice for up to 12 months of battery life. Now you won’t have to worry about buying additional batteries.

It may look chunky, but considering its durable design, I’m fine with the bulky and intimidating look.

Now smarter thanks to Wi-Fi

Convenience is important, so I like a smart lock that can get me inside in a jiffy. The fingerprint sensor is without a doubt my favorite way of unlocking the lock, as it’s able to recognize me in less than a a second. It’s been spot-on in terms of recognizing my fingerprints.

The digital keypad is my next choice. However, you’ll run into the problem of fingerprints becoming visible on its surface. This issue can make it easier for someone to guess your passcode by examining the buttons you’ve pressed in the past.

There’s a feature in the Eufy Security app, Scramble Password, that lets you punch in random digits before or after the pass code is entered. It’s a neat idea, but seems too bothersome to use with any frequency.

Of course, you can use the smart lock’s app to unlock it as well. The original version of  the smart lock strictly relied on a Bluetooth connection, but the biggest change with this model is the introduction of 2.4 GHz Wi-Fi connectivity. It opens a whole new set of functions, such as remote operation when I’m away — as well as support for voice assistants like Amazon Alexa and Google Assistant.

The addition of Wi-Fi brings the Eufy smart lock to the same level of utility as other recent smart locks. Therefore, if you’re away and want to let in the dog walker, you can do that through the app — whereas before, you couldn’t. This also keeps you informed about what’s happening at home, like whenever the door is being locked or unlocked, and at what time.

There are also options to set up temporary access for individuals. You can choose the dates and times when these temporary codes are active, which is great for guests or the dog walker.

If you’re worried about privacy, just know that fingerprints and in-app data are stored locally with a “bank-grade” AES128 encryption chip.

Eufy’s had a string of solid smart home gadgets, and now that Wi-Fi is available on the Eufy Security Smart Lock Touch, it’s on the same playing field as most of its contemporaries. Even better is that it retains its original $250 price tag, while the non Wi-Fi version now retails for $200. It’s a big investment when you look at some of the other smarts of other locks out there, but it gets the job done.

The August Wi-Fi Smart Lock fetches the same amount as this, but boasts more features and easier installation that retains your existing lock. The Level Lock is also another similarly priced option that turns any existing lock into a smart lock, while the pricier Level Touch adds a tap-to-go keycard system that you won’t find in other smart locks. If you’re on a budget, the Wyze Lock is hard to beat at $100.

It’s solidly constructed, and Eufy does offer a 1-year limited warranty for defects. Smart locks don’t see much abuse, since they’re fixed in one position, so I’d expect Eufy’s lock to last for years. You’ll probably want to replace it because of upgrades in newer locks long before it breaks.

Yes. Eufy’s Smart Lock Touch makes it simple and easy to open the door with a simple fingerprint unlock.