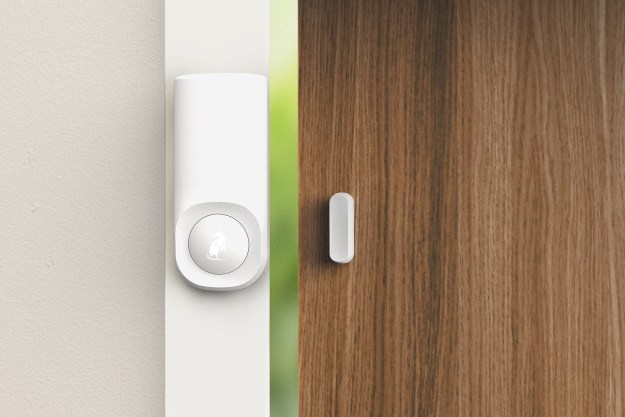 “The Kangaroo Home Security system is easy to install, but its photo doorbell camera leaves a lot to be desired.”

Home security is more important now than ever, especially as people are spending so much time in their homes. A home security system should provide sufficient coverage, be easy to install, and come at an affordable price. Kangaroo’s budget-friendly system ticks all of these boxes while offering 24/7 professional monitoring. It’s also one of the easiest-to-install systems on the market thanks to its peel-and-stick mounting system.

It’s not a bad value, and individual components can be purchased without much additional cost. For example, the Doorbell Camera with Chime is only $20, while additional motion sensors are just $15 each. The Water and Climate Sensor is $30. The most expensive individual component is the Siren + Keypad, which is $70 on its own.

These prices are competitive and often more affordable than other security systems on the market. Kangaroo also offers three plan options.

The first is Kangaroo Complete, which is $8.25 per month or $99 annually. This is the most comprehensive option and the best choice for someone who wants a serious security system. Many of the best Kangaroo features are locked behind the Complete Plan, including smart assistant integration, the ability to qualify for homeowner’s insurance discounts, and more.

Kangaroo Complete includes professional monitoring, notifications, and 30 days of cloud storage. If you’re looking for a true security system with all the bells and whistles, Kangaroo Complete is the only real option.

Another option is the Porch Protection Plan. At $23.88 annually, the name is self-explanatory: It focuses on protecting against package theft. It features 365-day cloud storage for doorbell cameras, as well as $300 package theft coverage.

The Kangaroo Basic plan is the free option for Kangaroo users. It provides notifications within the app if activity is detected, allows you to arm and disarm the system with just a single tap, and provides up to 24 hours of cloud storage for all cameras. It lacks the more powerful features of Kangaroo Complete, but would work for security on an outside storage shed or a property you don’t need full coverage on.

Kangaroo is impressive not only for its affordability but also the level of customization that it offers. Every sensor can be adjusted to suit your needs. Individual sensors can notify you through specific means; for example, if you only want a phone call if your bedroom sensor is set off, you can turn the “Voice Notification” setting off. Following is a rundown of Kangaroo’s offerings:

The motion sensors are incredibly sensitive. They pick up activity from 15 feet away, with a 120-degree field of view. The good news is that the built-in pet rejection automatically ignores anything up to 2-feet, 4-inches tall — although that might put you at risk for burglary from precocious toddlers.

The Water + Climate sensor is a particularly useful addition. It monitors temperature and moisture and can detect leaks with as little as 1mm of water. It doesn’t need to be mounted to anything, either — just set it up and place it on the ground. I use it to monitor for leaks under the bathroom sinks and around the washing machine. I’ve had no water leaks (and couldn’t trigger the system by dribbling water on it), but it alerted me when the AC went out and temperatures began to climb.

Like the motion sensor, the Water + Climate sensor will alert you if a threat is detected, or if the temperature goes outside of customized limits.

The Doorbell Camera + Chime is a nice compromise for a smart doorbell, but it isn’t the best device I’ve ever used. It isn’t a video doorbell, and instead takes photos of activity in front of your door. It doesn’t capture motion well — if someone walks across its field of view, you will be lucky to get a shot of the back of their foot.

The built-in button links directly to the chime and will ding if someone rings the doorbell. There are also multiple modes to better improve the image quality, including Sunlight Mode for when the camera is in direct sunlight or Night Vision if there is no porch light.

The battery is claimed to last a year with standard usage, and AA batteries are included in the package. It’s particularly useful for apartment dwellers, as the doorbell camera doesn’t need hardwiring. If you live in a crowded area or an apartment complex, the batteries will drained much more quickly. Expect three to six months if the camera is triggered often.

Although better than nothing, the photos taken by the doorbell don’t stack up against true video.

The Privacy Camera is an indoor security camera that can be mounted on the wall or set on top of a shelf. It has digital zoom capabilities and two-way audio. You can also adjust the privacy modes, and there is no doubt when the camera is in “Private” mode — an opaque field appears on top of the lens itself. When recording, there is a green LED that lights up.

What’s even more impressive is the built-in microphone. The Siren + Keypad listens for smoke and carbon monoxide alarms and will notify you if any danger is detected. The microphone is only capable of picking up sounds within the 3,000 to 4,000 Hz range, which means that human speech is not detected.

The most surprising part of the entire setup was the installation. All of the sensors, from the motion/entry sensors to the doorbell camera, all use a peel-and-stick system that makes it a breeze to install and mount.

Setup is done through the Kangaroo app. Just tap the Settings icon and then tap Add New Device. The on-screen instructions are simple to follow (and include pictures of each device). Once the accessory has been added to the system, just attach it to the wall or door and press for 30 seconds.

The setup process is equally as simple for the Privacy Camera or the Siren + Keypad. though these are not peel-and-stick accessories. The camera needs to be mounted using screws, while the Siren + Keypad has no mounting system.

The adhesive used is strong. Even after months, the doorbell camera maintained a good connection (and actually peeled a bit of paint off the door) when removed.

The Kangaroo Home Security system is one of the easiest models to set up that I’ve ever used. Installation is simple, and explaining how to arm and disarm the system to people that aren’t familiar with it (like apartment maintenance teams) is a breeze.

Most of its powerful features are locked behind the $100-per-year subscription. Even smart assistant integration with Amazon Alexa and Google Home is restricted. If you are going to invest in the premium subscription, then Kangaroo is definitely worth it.

After all, most other security systems often cost more than $8.25 per month for all of the features that Kangaroo offers. The system as a whole is tremendously useful, and the only real weakness lies in the doorbell camera. While photographs are good, actual video would be significantly better.

Kangaroo includes a one-year warranty for defects in the system under normal use. The components are well-built and should last for several years, although the doorbell camera may fail faster if directly exposed to the elements due simply to increased wear and tear.

Kangaroo is a good choice, but perhaps not the best. Both Ring and Simplisafe are alternatives with similar price points, but perhaps more features. Ring’s monitoring plan is also $100 per year, although the accessories are more expensive than Kangaroo’s.

Simplisafe has far more accessories to choose from, including glass-break sensors, a panic button, smoke detectors, and more. The downside is that it is far more expensive than Kangaroo.

While Kangaroo is a budget-friendly option, it lacks the features that more expensive brands offer.

At just $8.25 per month, Kangaroo’s professional monitoring is a steal.

For the price, Kangaroo Home Security is definitely a worthwhile investment. It’s affordable in a way that other security systems just aren’t, but it does lack easy integration to a greater smart home system.