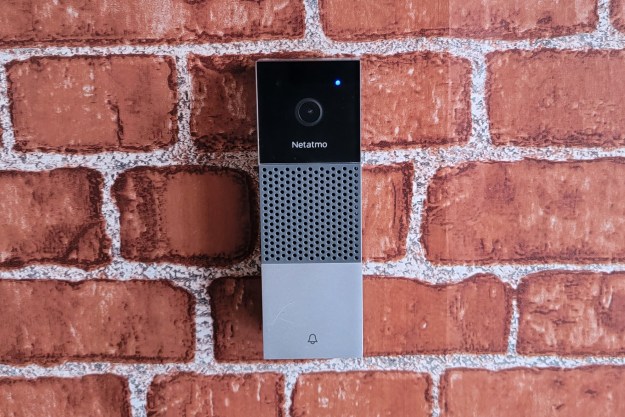 “The Netatmo Smart Video doorbell is a great video doorbell with a few minor shortcomings and one major one -- its price.”

When I was asked to check out Netatmo’s security camera a few months ago, I came away impressed with the functionality, but not fond of the design. Fortunately, Netatmo has made some progress in that category with its Smart Video Doorbell. Netatmo’s wired doorbell brings person detection and its familiar artificial intelligence (A.I.) features to a thankfully smaller form factor.

Netatmo still hasn’t quite shaken off its blocky roots, though, as the design of this doorbell reminds me of something you might see in Minecraft. The doorbell consists of three squares stacked on top of each other. The top square features the camera and Netatmo branding, the middle square is a speaker grill for two-way communication, and the bottom square has the button with a bell icon on it. Overall, the aesthetic works for me. It’s modern-looking, so it looks a bit off on a brick house, but you’re good to go otehrwise.

Installation is very straightforward. Netatmo even included a silicon barrier where you push the doorbell wires through for additional waterproofing. It’s a nice touch I haven’t seen before. You can also use a 25-degree offset to see if your house is like mine and has the door set back from the brick facing. There’s an included chime module that you need to attach to your transformer as well, so make sure you know where that is. Netatmo also includes an additional fuse, which is a first in my doorbell-reviewing career. Better to have it and not need it I suppose.

The video feed is very good. My Chicago backyard is a snowscape right now, so I can’t comment on color reproduction, but I can tell you the white balance is spot-on. There is a noticeable fisheye effect around the edges of the 140-degree diagonal field of view. At night, the infrared picture is quite good as well. You get a lot of camera in this doorbell.

Netatmo needs to do some work on its aesthetics, but this is a solid step in the right direction.

The speaker built into the camera is loud and clear. Netatmo doesn’t list an official specification on the speaker’s loudness, but it’s certainly clear enough to have a conversation. Both the two-way conversation and the video feed are fairly free of lag, so you won’t get those awkward pauses where you say something and then wait for the voice to go through.

The doorbell also works with Apple’s HomeKit, though I primarily used the Netatmo Security app for my testing. After my Logitech video doorbell review, it was a nice change of pace. Netatmo still does smart things with A.I. like focusing and cropping in on the subjects of motion in the thumbnails of saved events. Of course, for the first few days, it identified a floodlight bulb in the frame as a person, but that’s why detection zones are important.

There are a few quirks to the software that are hard to reconcile. For example, to watch the live camera, you need to press a phone icon in the middle of the screen. Similarly, to disconnect, you need to press a hang-up button. When you’re watching the live feed, you can unmute the speaker and microphone on the doorbell to have a conversation with whoever is there. I get the thinking behind this — you are “calling” the camera to have a conversation with whoever is at the door.

Netatmo doubles down on the “phone call” metaphor when the doorbell rings as well. In addition to ringing your indoor chime, the app initiates a call between you and the doorbell. Other doorbells, like our recently reviewed Wyze Video Doorbell, simply send you a notification and you can choose to act on it or not. This feature follows Netatmo’s video phone call metaphor, but just because I can rationalize it doesn’t mean it’s a good idea.

One of the few to support HomeKit

The addition of Apple’s HomeKit adds a nice new level of automation that we explored in the Logitech video doorbell. You can use the motion sensor on the doorbell to trigger other actions in the house, though I have yet to find one that makes sense. The video feed also works more intuitively through HomeKit; you don’t have to “call” the doorbell to see what’s going on outside. But the Netatmo App means Android users can enjoy the doorbell as well.

Overall, this is a solid entry in the video doorbell space. Netatmo needs to do some work on its aesthetics, but this is a solid step in the right direction. Frankly, the blocky doorbell won’t go with every kind of home. The integration with Apple HomeKit is simple while not excluding Android users. The video feed is great, with a slightly narrower field of view than others on the market.

As a stand-alone doorbell, this one fits the bill. It does everything it needs to as a video doorbell and uses smart A.I. to help you figure out what is important in a given clip. I’d love to test this during a non-winter month to see animals running across my deck, so I could really put that A.I. through its paces, but my review of the Netatmo Video camera gave me a good idea of what to expect. If you’re putting together your smart home piecemeal, this is a good addition, as long as you like the look.

The Netatmo Video doorbell does a lot of things right, but Netatmo is asking for almost $300, and there are other options out there worth considering. From a design perspective, I prefer the rounded look of the Arlo Video Doorbell or the Nest Hello. From a field of view standpoint, 140-degrees is middle of the road. Doorbells like the Vivint Doorbell Camera Pro give you a full 180-degrees top, bottom, left, and right. Put simply, for its price, the Netatmo should be the best of everything, and it’s really not.

The Netatmo Video Doorbell is rated to work between -10 – and 40 degrees Celsius, and is IP44 compliant. Netatmo products carry a two-year limited warranty. The silicon barrier will help keep water out of the electronics, so I don’t see any reason why this doorbell shouldn’t last a long time.

No. At $300, there are other options out there that do a better job. Consider the Wyze Video Doorbell at 1/10th the price. It’s true that Netatmo doesn’t charge a subscription service, and all video is stored locally on an included SD card, but at this price, it’s hard to recommend, especially when the pricing on video doorbells is going down in general.