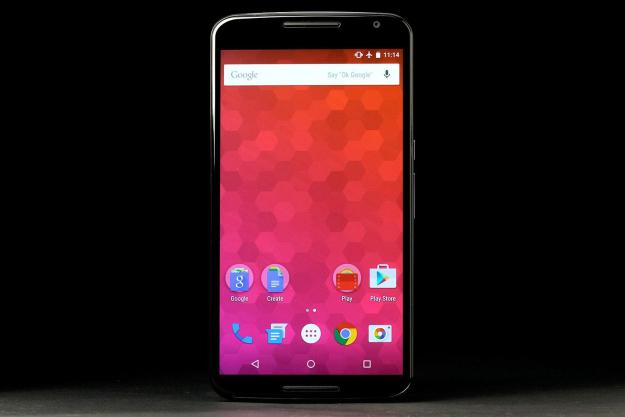 “The Nexus 6 is the best overall Android phone we’ve used thanks to Android Lollipop, but it is big and no bargain.”

For half a decade, Google’s Nexus phones have shown phone makers and regular folks exactly what its vision of the perfect Android phone looks like. But if the Nexus 6 is Google’s vision for the future of Android phones, I am in awe, and a little frightened.

The Nexus 6 is much larger than last year’s Nexus 5. It looks like a buff, roided out Moto X (both phones are made by Motorola). If this were the movie Twins, Nexus 6 would be Scwharzenegger to Moto X’s DeVito. The new Nexus looks and feels just like Motorola’s flagship phone this year, but it’s bigger and more powerful in every way. Unfortunately, it also carries a heftier price tag.

The Nexus 6 is not for the faint of heart. It’s one of the largest phones around and it’s proud of its plus-size figure. It has a full 6-inch screen and measures 6.27 x 3.27 x 0.40 inches, making it about a quarter of an inch wider, slightly taller, heavier, and thicker than both the iPhone 6 Plus and Galaxy Note 4. If you are at all concerned about the size of the phone you own, be sure to hold one of those devices before you commit to a Nexus.

I’ve begun to get used to phablets, but I have almost dropped the Nexus more than a few times due to its size. It’s just … a lot to handle when you’re on the go. I had a lot less trouble holding the Galaxy Note 4 and OnePlus One. The iPhone 6 Plus does feel a little unwieldy due to its height, but at least it’s thin. The Nexus gets pretty thick in the middle, thanks to an arched design.

The entire interface has that colorful, flat look to it that’s so hot these days.

Fortunately for both Google and Motorola, there’s little to complain about other than size. The frame is made of aluminum with a dark blue tinge to it, and the back panel is rubberized plastic with a gray matte finish. The Motorola symbol on the back does indent as well, which can help you hold the phone, ever so slightly.

Finally, the power and volume buttons are placed midway up the right side of the phone, so it’s easy to hold it and press them without a crisis. I love the etched lines on the power button, which make it very easy to find and press in the dark, or in your pocket.

Bottom line, this is a gorgeous, monstrous, well-built phone.

I don’t always mention sound, but there is some good and bad news to report. The headphone jack is annoyingly placed at the top of the phone (what is this, 2012?!) so it’s more awkward to grab the phone out of your pocket and start using it. Instead, you have to pull it up top first, like you’re extracting a treasure chest from the bottom of the ocean. Putting the audio jack on the bottom would make the whole process a lot more seamless. It’s odd because the Galaxy Nexus was one of the first phones to really embrace the bottom-jack concept.

The good news is that the Nexus 6 has two front-facing speakers on it, making it the second-best sounding phone available today. It plays second fiddle only to HTC’s respectable One M8 and its “BoomSound” speakers. This phone has loud, proud stereo speakers.

Android 5.0 Lollipop is fantasticly fun. It’s the first notable design update to Google’s OS in a few years and really feels as significant as iOS 7 was for the iPhone. Google has added fun little animations and rubber banding effects to almost everything, but they’re subtle enough that they won’t drive you nuts. Whenever you open a folder or window, it opens like a balloon, instantly blowing up and out. Google reps told me this visually shows people where new menus came from, making the interface less cold and make more sense. There are more white backgrounds and the entire interface has that colorful, flat look to it that’s so hot these days. Google calls its new look “Material Design.”

If the Nexus 6 is Google’s vision for the future of Android phones, I am in awe, and a little frightened.

This isn’t a small makeover, either. All of Google’s apps have the fresh flat vibe to them. There are a few more of them, too! Google is shipping the Nexus with a Fit app (doesn’t everyone?), a Helpouts app for getting live video help with things, Google Sheets, Google Slides, Google Docs, Google Express (same-day food grocery delivery), and Google Keep for notetaking. Google Now has a new home, too; you can enter it by swiping right on the first home screen.

Being a Googler, I like most of the new apps, and the non-essential ones are removable. If you hate having more Google apps on your phone, buying the Google Nexus 6 is not a good idea. But it does still (somehow) have less bloatware than your typical LG or Samsung phone.

Other fun design touches include the retooled notifications menu, which now comes up on the lock screen, too. It has a simpler feel to it, and a double pull on it brings up the quick settings, so you can toggle Wi-Fi, Airplane mode, and other essentials. One of our favorite new ones is Chromecast screen mirroring, which makes it possible to cast apps that don’t have Chromecast support yet.

Everything about Lollipop is improved over previous versions of Android. Going back to Android 4.4 KitKat on a OnePlus One, after using the Nexus 6 was jarring. Google is on the right track here.

The only downside is that Android Lollipop, despite being built for this large Nexus, offers absolutely no aids to make using a big phone any easier. Apple lets you double touch the Home button to bring the screen down so you can reach it, but Google has no such option. Most apps don’t appear to take advantage of the phablet form factor either. Prepare to grin and bear it, folks.

Powerful, but weak at an angle

The Nexus 6 is cutting edge in every way, when you open it up. It runs on a 2.7GHz quad-core Qualcomm Snapdragon 805 processor (the latest and greatest), has 3GB of RAM, comes with 32GB or 64GB of storage, and has a 6-inch 2,560 x 1,440 pixel AMOLED screen. It’s damn fast and the screen looks vivid and so pixel dense that I’m convinced that you’ll forget what a pixel is pretty soon.

Angular issues aside, the phone is a beast. In the Quadrant Android benchmark test, it scored a 13,088, which is oddly low (we expected a 23,000). However, in 3D Mark’s Ice Storm Unlimited test, it managed a 20,470, making it one of the most powerful devices we’ve tested and on par with the Droid Turbo. Only the iPad Air 2 and a model of Galaxy S5 top it (unless you start comparing it to PCs). Its Geekbench multi-core score of 3260 also reiterates its power. We’re not sure why Quadrant is showing a low score, but it is an older benchmark test, and the number doesn’t seem representative of how well if performs.

I love Motorola phones these days, but there is always, and I mean always, a big problem with them: the cameras. Luckily, Google’s improved camera app helps resolve many previous issues. You can choose items to focus on with a tap and take photos with the on-screen shutter button. The Nexus 6 has a 13-megapixel rear camera, but photo quality still doesn’t match the 8-megapixel shooter on the iPhone 6 or 6 Plus. To be fair, no phone camera does. For some reason, Apple has a lock on photo quality. Photos from the Nexus 6 were great compared to other Android phones, but lacked the realistic coloring and lighting of the iPhone.

The 3,220mAh battery keeps the Nexus 6 going for a little over a full day. So far, our battery-life experience isn’t as good as the Motorola Droid Turbo or Galaxy Note 4, but like all big phones, it delivers a full day of battery even if that day is long and taxing.

The Nexus 6 is one of the most powerful phones we’ve ever used, and a fantastic one – if you can hold it. This is a very large phablet that outsizes its mightiest competitors.

The other bulky thing about the Nexus 6 is its price. It starts at $650 for a 32GB unit and $700 for a 64GB. This is a huge price jump for Nexus phones. Last year’s Nexus 5 started at $350. Google wants to make money this time around. The new price tag makes it as expensive as iPhone 6 Plus and Galaxy Note 4. If you are hoping for a budget phone, the OnePlus One is the best option. It is sitting on the $350 price mantle this year.

The price is high, which is disappointing, but the goods do deliver. The Nexus 6 is a fantastic phone, if you can afford it.