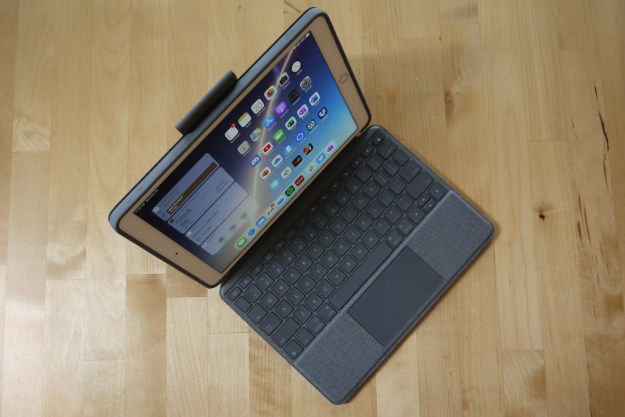 The iPad is now a laptop. Whether it’s a good alternative is up for debate, but ditching an old-school clamshell for the world’s best tablet is now possible with the right accessory. Apple’s own Magic Keyboard is a great choice if you own an iPad Pro of recent vintage. If you want a full keyboard and touchpad for another iPad model, though, you must look elsewhere.

Logitech’s Combo Touch is sure to be at the top of your list. It’s the only keyboard case with touchpad that supports the iPad Pro 10.5-inch, the iPad Air, and the 7th-gen iPad. It’s also reasonably priced at $150. That undercuts most third-party iPad keyboards with touchpad, such as the $200 Brydge Pro+.

As a result, the Logitech Combo Touch will become the default choice for some iPad owners — so it’s a good thing it’s excellent.

Logitech’s Combo Touch doesn’t fit the mold you’d expect from an Apple accessory. Third-party companies designing products that work with Apple’s popular devices often try to mimic Apple’s look. Not here. Logitech instead offers a chunky, playful case that prioritizes ease of use. This falls in line with other recent Apple accessories from Logitech, like the Crayon stylus and Pebble i345 mouse.

I tested the Logitech Combo Touch with my iPad Pro 10.5-inch. This model also fits the third-generation iPad Air (iPad 7th-gen owners need to buy a version specific for their device, but it differs only slightly in thickness).

You’d have to straight-up shank the thing to cause any damage.

Though I didn’t toss my iPad around to see if it survived, I feel confident with the Combo Touch on my iPad. This thing is a thicc boi, providing plenty of cushion on every side, and a significant raised lip around the iPad’s display. Closed, with the keyboard cover protecting the display, you’d have to straight-up shank the thing to cause any damage.

It has a grippy fabric surface on the front and rear of the iPad that keeps the tablet from leaping out of your hand.

The trade-off for this protection is that it bumps up the weight. The Logitech Combo Touch weighs 21 ounces in total. That’s over a pound! Attached to my iPad Pro 10.5-inch, it brought the device’s total weight to 29 ounces without the keyboard cover attached. With it, the full unit is a hefty 40 ounces. That’s 2.5 pounds.

I don’t think the weight is an issue for travel. My iPad is still light with the Combo Touch attached, and still fits in any backpack or messenger bag. The real issue is tablet use, as this case almost doubles my iPad’s weight and made it more tiring to use while holding it.

The Combo Touch didn’t interfere with buttons or ports — a surprise, given its size. I had no trouble accessing my iPad’s lightning jack or headphone jack, and the volume buttons never failed to work. You might have trouble if you have a device with a particularly large connector — I’ve seen some beefy 3.5mm jacks on high-end headphones — but none of the devices I own had an issue.

As a case, the Combo Touch is mixed. The bulk can be annoying, but its not without advantages, which is why I’ve removed my iPad Pro from the case only once (and soon returned it). The Combo Touch case provides great protection and makes the iPad Pro easier to grip firmly with one or both hands.

The keyboard is way better than you’d think

I wasn’t sure what to expect from the Combo Touch’s keyboard. I’ve reviewed laptops long enough to remember the netbook era, and those tiny PCs left a distinctly sour impression on my cramped hands. While the Combo Touch adds bulk, the total package is a tad smaller than most netbooks I used.

Surprisingly, the Combo Touch is comfortable. Logitech only has a hair more than 10 inches of iPad to work with, but the company takes advantage of every inch with an edge-to-edge key layout. There’s no wasted space here. The keyboard is backlit, with power drawn from the iPad through the Smart Connector.

A spacious layout is helped along by clicky keys that feel great. I’d rather use the Combo Touch than the butterfly-switch keyboard found on older MacBooks. In short, don’t worry about the keyboard. You won’t have a problem with it.

The touchpad isn’t as impressive, though it will be familiar if you own, or have ever used, a budget laptop. There’s enough room for comfortable use and the surface is responsive. It’s plastic, though, so it lacks the silky smooth feel you’ll find on Apple’s Magic Keyboard and Apple’s MacBook laptops.

A kickstand is built into the case portion of the Combo Touch, so it’s available even if the keyboard isn’t attached. Broad and sturdy, the kickstand did an admirable job of keeping my iPad settled on my lap. I was never worried the iPad might slide off or flip backwards.

It’s worth mentioning that iPadOS does its job to support the keyboard and the touchpad. You’ll find a row of function keys that provide easy access to various iPad features, and the touchpad can be used to perform multitouch gestures you’d otherwise perform on the iPad’s touchscreen. Logitech’s Combo Touch is a third-party accessory, but the integration between it and the iPad feels first-rate.

There’s even a loop to store your Apple Pencil or Logitech Crayon stylus, though I don’t own either.

The keyboard and touchpad on the Logitech Combo Touch hold up to hours of use. And with the recent addition of full cursor support to iPadOS, you can accomplish many tasks once reserved for laptops. Does that mean you can buy this case for your current iPad and ditch your laptop entirely?

Maybe. It’s certainly possible, but the answer will be personal, and depends on your willingness to change your workflow.

Can buy this case for your current iPad and ditch you laptop entirely? Maybe.

There are advantages to the iPad with Combo Touch. The display is smaller than most laptops, but its bright, attractive, and you can touch it. You can easily switch between using the iPad as a tablet or a laptop, depending on the task. Travel is a cinch, whether you’re walking 5 miles or flying 500.

There’s also not much disadvantage to the iOS ecosystem – on the contrary, many apps now feel faster and smoother than their PC or Mac counterparts. The iPad is also hands-down better than any budget laptop when it comes to entertainment, thanks to its display and reasonably capable GPU.

It’s not all good news. Despite its advantages, and new multitasking features, iPadOS isn’t great in situations where you need to open multiple apps and work with them side by side or flip between them frequently. Since iPad apps are touch-first, they don’t make the most efficient use of the iPad’s limited display space.

There are even some lingering problems in web-based apps, which can be fussy on iPad despite Safari’s switch away from serving up mobile versions of websites by default. Web-based WordPress is still a sore point. The app is fine, but it doesn’t work with every implementation of WordPress.

Here’s what I can say for sure. An iPad, iPad Air, or iPad Pro 10.5-inch becomes a perfectly usable laptop replacement when paired with the combo touch. Whether you’ll prefer it is a more personal decision, but it can absolutely work.

The Logitech Combo Touch is a great accessory, and a bargain at $150. If you own an iPad compatible with this case, stop your search. This is the iPad keyboard case to buy.

Apple’s Magic Keyboard is better overall, with a more professional and mature design, but it’s only available for the latest iPad Pro models (which the Combo Touch doesn’t support) and is significantly more expensive.

The Apple Smart Keyboard is priced at $160 and offers a very slim keyboard that adds less bulk. It was designed prior to iPadOS mouse support, however, so it lacks a touchpad. Logitech’s Combo Touch easily beats it.

Brydge makes a variety of alternatives, but it doesn’t have a keyboard case with touchpad for iPad (7th-Gen), iPad Air, or iPad Pro 10.5-inch. Again, this makes the Combo Touch a better choice.

The Logitech Combo Touch will last many years. It doesn’t have a built-in battery that might degrade over time, and its durable construction easily handles rough use. The only threat is water, as the Combo Touch isn’t rated for water resistance.

Yes. The Logitech Combo Touch is an excellent keyboard case that should be your go-to pick for the iPad models it supports.