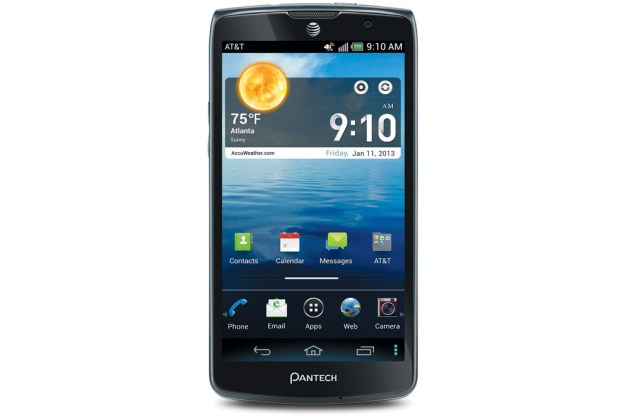 “...the Pantech Discover is more impressive than phones twice its price. It can't compete directly with the Galaxy S4's of the world, but for a $50 budget phone, it's at the top of its class.”

Budget smartphones are rarely inspiring. But for a few notable exceptions, they don’t tend to compete with the big flagship phones on hardware or features. Wireless customers looking for a less expensive device often have to settle for less, especially if their budget is really tight. That’s why it’s such a pleasant surprise when a phone manages to be both inexpensive and worth having (or even drooling over). The Pantech Discover one such device.

The specs are mostly what was considered high-end a year ago – not a bad thing – with a few features that keep up with the newest from the big players like Samsung and HTC. All for $50 on contract with AT&T.

One of the nicest surprises about the Discover is the cool and comfortable design. The back has a wave-like form that swells at the top and the bottom. The lower bump fits right into the cradle of your palm. A crosshatch-esque texture adds to the holdability and also looks really nice. We can forgive companies using plastic when the material is put to such good use. Another standout design element is the set of stereo speakers on the top edges. Their prominence and attractive design almost dare you to give music a listen on this phone.

You might think from the large, 4.8-inch display size that the Discover would come off as big, but Pantech manages to pull off the same trick as Samsung and HTC: it packs a large screen into what feels like a smaller phone. People with medium or large hands will have no trouble using the Discover with just one, partially because the phone is well balanced on top of being compact.

This is a budget phone, though, so that big screen doesn’t come with a 1080p screen, but it does pack in 1280 x 720 pixels, which is pretty good. Images and video look crisp and the overall color quality is great. The screen is bright and sunlight readable at 100 percent with wide viewing angles. Our only gripe is that smudges need cleaning more often than we’d like.

The Discover is a proper Android 4.x smartphone, so there are no hardware buttons other than power and volume. These are well placed on the top and left side, respectively, and easy to find by feel. Finishing up the external specs: Micro USB on the bottom, headphone on the top, microSD (up to 32GB), and SIM card slots under the removable back plate along with the user replaceable battery. Overall, the Discover blends practical, tactile, and aesthetic design well.

Surprisingly for a phone, the Discover delivers an excellent audio experience. You’ll certainly get a loud one. The Discover pumped enough volume to fill a room and people around us assumed the sound was coming from a laptop. The quality of that sound is certainly above average, but it’s still limited by the fact that the speakers are small and in a phone, so some tin-iness and clipping occurs. Overall, audio is impressive.

The design and placement of the speakers means setting the Discover on a surface won’t muffle the audio but when holding it in landscape mode the fingers will naturally block at least one. When making calls, we were impressed with the clarity of voices when we put callers on speakerphone. Call quality was fair to good depending on whether callers were on cell or landlines. Our voice reportedly came through clear for the most part, but not perfectly crisp.

The Pantech Discover runs Android 4.0 Ice Cream Sandwich covered by a custom interface. An update to Android Jelly Bean has been promised. They provided no time frame and, in general, updated usually don’t come very fast.

Pantech clearly took note of the prominent Android UIs available and mined ideas on how to make its own. The result is that the Discover’s list of software features is almost as long as the Galaxy S4’s, and more indiscriminate. Some of the extras make using Android easier, some just add unnecessary layers of complexity.

An example of the good: In addition to toggles in the Notification shade for wireless radios, vibrate, and more, there are also shortcuts to oft-used settings in a drawer that can be hidden away when you don’t need it. Examples of the overboard: The favorite apps section at the bottom of the Home screens now also slides left and right so you can add up to 10 more, but at that point you might as well just use more Home screens. Striking a balance between useful and frivolous software features is something even bigger manufacturers struggle with, so Pantech can’t be blamed for trying. The result isn’t unworkable; we just wish the company had been more discerning when putting this skin together.

For those who want a paired down and streamlined experience, Pantech provides an “easy mode” that features simple layouts, larger icons, and bigger text in some apps. (Yes, this does sound familiar.)

The Discover’s 12.6-megapixel rear camera captures decent images that are made better by the customized camera app that supports it. The app isn’t as overstuffed as the phone’s overall software package and ironically could use a few extra features. A lack of Night mode makes the flash on the back a necessity for pictures in low light. HDR (high dynamic range mode) is available and elevates the overall quality of even basic shots. In Normal mode, flowers in the sun look washed out; with HDR they regain their color even when partly in shadow.

The pictures aren’t as crisp and sharp and noise-free as shots from the HTC One or the Galaxy S4 when viewed at full size. Still, they’re much better than what we got from the camera on the HTC First and more worthy of posting to Facebook.

We appreciate that the mic for video points at whatever you’re filming and owners won’t cover it up accidentally with their hands. The mic’s gain is high, so audio isn’t the cleanest, especially in noisy environments. In our sample video, wind noise is clearly audible.

Inside the Pantech Discover is a 1.5GHz dual-core Qualcomm Snapdragon S4 (same as in the Galaxy S3), 1GB of RAM, and 16GB of internal memory. This combo scored an average of 5,400 on the Quadrant benchmark, which is about halfway between the Galaxy S3 and the Note 2, 5,000 and 6,000, respectively. We saw smooth, speedy performance when using the interface and apps. Framerates are nice and high for playing games; we just wish the phone didn’t get noticeably hot when taxed. The vast majority of apps are made to take advantage of dual-core power, so even though the Discover isn’t super powerful, most users will never download an app that suffers from lack of quad-core-ness.

The Discover is a world phone that runs on AT&T’s 4G LTE network, falling back to HSPA+ when necessary. Speeds on LTE varied widely, sometimes averaging around 2.9Mbps down and 3.1Mbps up, other times zooming along at 10.7Mbps down and 6.0Mbps up (measured by Speedtest.net). Alternative wireless connections on offer: a/b/g/n Wi-Fi (5MHz capable), Bluetooth 4.0, NFC, GPS, and mobile hotspot.

Battery life is impressive for a phone with a big screen – the Discover lasted us around 12 – 15 hours with medium to heavy usage. This included watching video, playing games, listening to a lot of music, taking pictures, and making phone calls with the display on auto brightness.

In many ways, the Pantech Discover is more impressive than some phones we can name at twice the price. It can’t compete directly with the big flagship devices, but within the realm of budget phones it’s well worth the asking price. For just $50 on contract at AT&T, you get a large screen, good performance, long battery life, comfortable design, and a decent camera. The cool speakers are just icing.

Topics
Video-editing app LumaFusion to get a Galaxy Tab S8 launch
The best smartphone stocking stuffers for the 2022 holidays
When is my phone getting Android 13? Google, Samsung, OnePlus, and more
Best Black Friday iPad Deals: iPad Air, iPad Mini, iPad Pro
The best Android phones in 2022: Samsung, Google, and more
Why a Kindle Paperwhite is the best $100 you can spend on Cyber Monday
This Amazfit fitness tracker is $35 for Cyber Monday, and it’s selling fast
This 10-inch Lenovo tablet is $129 for Cyber Monday (selling fast)
Save $200 on the Samsung Galaxy Tab S7+ with S Pen for Cyber Monday
Don’t buy the wrong iPad during Cyber Monday — get this one instead
Samsung’s Galaxy Buds earbuds line is discounted for Cyber Monday
Audible Cyber Monday deal drops the price of Premium by 60%
This is your last chance to get 3 months of Kindle Unlimited for just $1