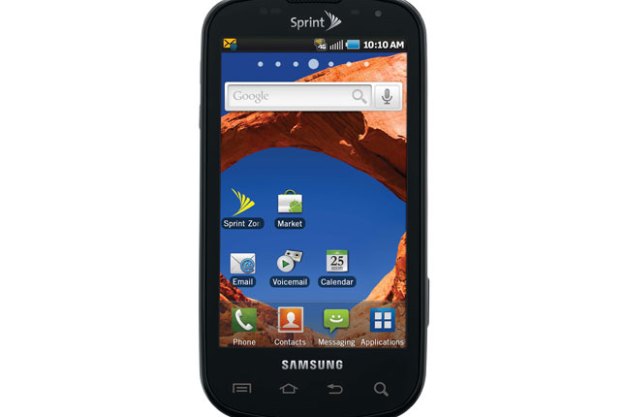 “With 4G connectivity and a slide-out QWERTY keyboard, Sprint’s Epic 4G outshines every other Samsung Galaxy S variant on the market.”

In the universe of Samsung’s Galaxy S phones, Sprint’s Epic 4G, may be the brightest star, and not just because it’s the only 4G model of the bunch. The Epic is shockingly light, considering it’s a third thicker than the other also abnormally lightweight Galaxy S models, because of its slideout horizontal keyboard. But that keyboard elevates Epic’s superiority over not only its Galaxy S siblings but over Sprint’s first 4G phone, the EVO 4G, to which it is more appropriate to compare.

At the end of August, Sprint subscribers (especially those in the 48 4G-enabled cities) will have a choice in 4G phones: HTC’s EVO and the Samsung Epic. What are the differences?

Physically, the EVO is a hair smaller all around, but weighs a half ounce more. In fact, the Epic is shockingly light considering its girth – you’ll teeter between thinking it feels cheap, and happy it’s not sagging your shirt’s breast pocket. Despite their near identical area and mass, the EVO sports a 4.3-inch LCD, while the Epic has a 4-inch super AMOLED. It’s smaller, perhaps (even though both measure 800 x 480 pixels), but certainly more colorful and brighter – except, enormously, in sunshine. Regardless of our brightness settings, in daylight, while surfing the net or framing photos, the Epic’s screen appeared to have a blue-gray filter over it. The Motorola’s Droid 2‘s display, by comparison, outshined both the sun and the Epic in side-by-side comparisons. In every other lighting condition, the Epic’s AMOLED outshines all but its Galaxy S siblings.

The Epic’s primary physical advantage over the EVO is its slide-out, four-line horizontal QWERTY keyboard with a dedicated numeric row, which you get without physical cost considering the scant size and weight difference between the two phones. The EVO does have an HDMI output jack lacking on the Epic, but it’s hard to see how a cellphone lacking HDTV connectivity would be a negative deciding factor.

No, the Epic doesn’t include a kickstand.

Feature-wise, both the EVO and Epic use 1GHz processors, and offer Android 2.1 (both will be upgradable to 2.2 at some point), although the Epic often annoyingly lagged in processing execution. Samsung’s Android implementation is slightly different, but not necessarily better than the EVO, with none of the implementation differences amounting to an advantage for either. For instance, the EVO’s applications are arrayed in Android’s original vertical screen drawer, while Samsung arrays apps across the Epic on separate horizontal screens, ala Apple’s iOS. Six of one, half a dozen of another.

Both the Epic and EVO include mobile hot spot connectivity in 4G, with the Epic offering connections for up to five devices while the EVO offers eight. The difference is unlikely to be a huge consideration. Both feature 720p HD video capture, and while the EVO shoots 8-megapixel stills compared to the Epic’s 5-megapixel imager. This is also not a difference maker. Despite the megapixel war waging in digital camera land, 5 megapixels is plenty for anything other than shooting posters or billboards, and the cheap plastic lenses on cell phone cams severely curtail the EVO’s resolution superiority.

Both feature a front-facing camera for self-portraits and Qik video chatting. Again, the EVO’s lens, at 1.3 megapixels, is statistically superior to the VGA imager on the Epic, but a megapixel imager for cell-based video chatting is overkill since you’re seeing the image on such a small screen. It might matter in the future if Qik capabilities are extended to the desktop, however.

Stylistically, the EVO is a stern, squarish black slab while the Epic has softer curves with a sleek silver perimeter ribbon between its two black halves. Did we mention how light it feels?

The Epic is $50 more, but includes a pre-installed 16GB microSD card, where the EVO comes with just an 8GB card. So, is a QWERTY keyboard and 8 additional gigabytes worth an extra $50?

Like the EVO, the Epic shines as a multimedia player, given Android’s less-than-iOS ability to organize files. For instance, instead of logically placing side-loaded videos into the Galaxy folder, they’re buried instead within the phone’s My Files folder. Samsung’s Media Hub store isn’t open yet, but the Epic includes Sprint TV and YouTube.

As with other Galaxy models, the Epic’s AMOLED screen only amplifies the low-resolution inadequacies of these network-carried content. Higher resolution content pops off the screen like a little HDTV display.

Conversations are crystal clear with plenty of volume, although the volume toggle on the Epic’s left perimeter is difficult to distinguish by feel. There’s a speaker mounted on the bottom of the back, which means you won’t be able to place the Epic bottom-down on a table for speakerphone or video-watching, perhaps accentuating the lack of the EVO’s kickstand.

The Epic’s slide-out QWERTY keyboard feels spring loaded and snaps out easily. It’s a wide keyboard, with square black keys on a black background with rows arranged in checkerboard (rather than staggered) style. While keys are flat and, therefore, hard to distinguish by feel, they are well-spaced so accidental adjacent tapping is reduced.

Unlike Motorola’s Droid phones, the Epic includes a handy dedicated number row. Unfortunately – and a bit inexplicably – it lacks a dedicated @ key on both the physical and touch keypads, replaced on the slide-out QWERTY keyboard by the infrequently used emoticon key.

Even in 3G territory, the Epic loads Web pages in a snap. Mobile-optimized sites and pages such as CNN, The New York Times and ESPN all load in a swift two to four seconds. The advantage of 4G will come in loading non-optimized pages and, of course, for mobile hot-spotting. Non-optimized pages, depending on graphical content, can take up to 20 seconds or more to load. This is becoming less of an issue, however, as more and more major sites create mobile-optimized versions.

As noted above, just because the EVO sports an 8-megapixel imager and the Epic “only” 5 megapixels, doesn’t automatically mean the EVO has a better camera. But it does, barely, on outdoor shots. Sunshine shots from the Epic are a bit darker than on the EVO, although easily corrected in photo-editing software programs. Indoors, however, the Epic’s photos are smooth – if you can keep the phone still enough to get a clear shot, a huge caveat – compared to the EVO’s grainy results (both include an LED flash).

The Epic captures 720p HD video at a slightly higher bitrate than the EVO, but with similar amount of edge fuzziness.

Like the stupid navigation-backlight-syncing issue, the Epic suffers from another problem common to all Galaxy S phones. In camera mode, the power button, locks the screen and all the buttons, a status indicated by a tiny, barely perceptible on-screen padlock icon. With no immediate and obvious locked-status indication, it frequently delays snapping candid shots, or exiting the camera function.

Where and how you use the phone – 3G or 4G – will greatly impact battery life. In 3G territory, the Epic lasted nearly two days of normal on-and-off usage before falling into critical recharge territory. The EVO is rated for six hours of talk time, so we presume the Epic, with its similar 1500mAH battery, will provide around the same.

Even if you don’t or won’t have 4G service, the Epic is a flexible, light, fun and easy-to-use superphone. The Epic might be a value match for the EVO, thanks to its super-bright super AMOLED screen, slide-out keyboard and pre-installed 16GB microSD card, and even taking into account its minor operational annoyances and comparative specification failings in camera MP and hotspot connectivity. But given you can buy a 16GB microsSD card for around $25, the Epic isn’t worth an extra $50 unless you absolutely need a slide-out QWERTY keyboard. So far, the Epic is one of the best phones on the market today.

Video-editing app LumaFusion to get a Galaxy Tab S8 launch
Samsung Galaxy S23 leak teases a disappointing charging spec
The iPhone 14 gets a stunning transparent back with this new mod
Hey look, the iPhone’s Dynamic Island has come to … Android?!?
Apple rolls out iOS 16 update to fix frustrating camera-shake, paste bugs
Everything (and we mean everything) to know about 5G on the iPhone
OnePlus 11 Pro leaked specs predict a zooming disappointment
How to turn off your iPhone 14 Pro’s always-on display
Does the iPhone 14 Pro have a battery life problem? It sure looks like it
Your guide to the best e-book readers for 2022
How to delete lock screen wallpapers in iOS 16
iPhone 14 Pro vs. iPhone 13 Pro camera battle isn’t as close as you think
The best gaming tablets for 2022