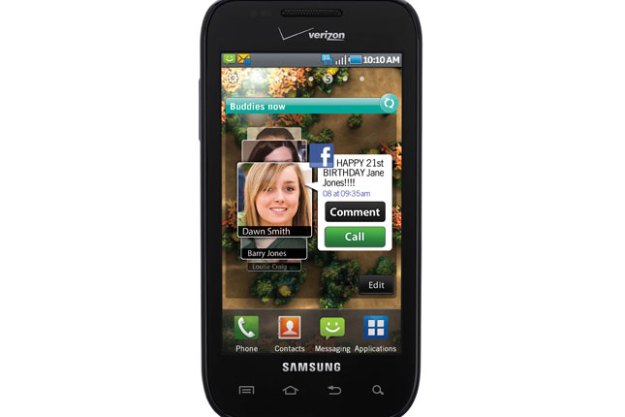 “Samsung’s Galaxy S Fascinate holds its own alongside the popular Droid X, leaving room for both superphones on the nation’s largest wireless carrier.”

If Apple plans on getting the iPhone to Verizon, it had better hurry up, because the competition in the superphone category is heating up. The Droid X already provides daunting competition, but now Verizon has added another Android heavyweight, the final Samsung Galaxy S model, the Fascinate. Both black slab touchscreen superphones tell a similar technical tale-of-the-tape, and your choice will be based on what attributes appeal more to you.

All Samsung’s Galaxy S models feel ridiculously light, but the mostly plastic Fascinate, along with the T-Mobile’s Vibrant, at 4.16 ounces, are the lightest of the family. By comparison, the larger, mostly metal Droid X weighs nearly an ounce and a half more at 5.47 ounces, and its heft screams quality and security. For shirt pockets, however, the Droid X’s extra ounce-plus could mean the difference between unsightly sag and no sag.

Both black slab superphones offer a similar set of superphone attributes: a high-megapixel camera (8 megapixels for the Droid X, 5 megapixels on the Fascinate) with flash; HD video recording; a 1GHz processor, Android 2.1 (upgradable to 2.2), and Wi-Fi and mobile 3G-to-Wi-Fi hot spot capability for up to five simultaneous users.

The Droid X has a bigger screen – 4.3 inches vs. 4 – but that extra 0.3 is mostly in length, which means a line or two more of text while Web browsing and e-book reading.

But the Fascinate’s super-bright Super AMOLED cuts through blinding direct sunlight as if it wasn’t there; Droid X’s screen does a brave job, but bleaches out miserably outdoors by comparison. AMOLED screens also require less power, and the savings become obvious if you forget to plug in your phone every night.

One major point of differentiation between the two is memory: both include a pre-installed 16 GB microSD card, but Fascinate has just 2 GB built-in vs. Droid X’s built-in 8 GB, which means you get a total of 24 GB out-of-the-box with Droid X vs. 18 GB for Fascinate for the same $200.

Colors really pop on the Fascinate’s AMOLED screen, but the Droid X’s longer screen provides slightly more video space, especially if you watch a film that maintains a 1.85:1 aspect ratio. Brightness trumps a few millimeters of extra screen space, but not by much since the difference is noticeable only in side-by-side comparisons. In other words, the Droid X’s display is near-great compared to the Fascinate’s spectacular screen.

If you can get a YouTube video to load (see Web section), you have to drill through the menu to switch to the high-quality version; on the Droid X, high quality is right on the main screen – admittedly, a minor quibble.

Neither phone offers enough volume to overcome Manhattan street noise. In quieter environs, voices were clear and crisp at both ends of the conversation, so either will satisfy for actual chatting.

The Fascinate’s keyboard has no dedicated @ key – it’s on the second SYM keyboard –which sounds piddling, but becomes annoying when every time you want to write out an e-mail address, you have to search out the SYM key and shift to a second keyboard screen to complete it. Even if you access addresses from your contact list, adding the @ key boils down the choices.

Our annoyance with the unsynced touch control backlights on the Galaxy S phones (see our review of the Galaxy S Vibrant and Captivate) carries over to the Fascinate as well.

Because the Droid X has physical buttons, pushing any of them will wake up the sleeping phone. With touch controls, the Fascinate can only be awoken only by pressing the side power switch.

Side-by-side speed comparisons around various spots in New York City revealed the Droid X as overall faster. Web-optimized sites such as The New York Times, ESPN and CNN loaded a second or two faster on Droid X than Fascinate, but non-optimized sites broadened the Droid X’s speed lead. When the Fascinate was faster it was just barely; however, when Fascinate fell behind, it was a substantial fall-off of 10 to 30 seconds, depending on the site.

The Droid X was much faster finding and downloading apps from the Market – Droid X found Wapedia and Pandora faster on the initial search, then loaded both apps in around five seconds; it took Fascinate another 25 seconds to complete the download for Wapedia, more than a minute for Pandora. We had similar experiences searching for and downloading other apps; on a couple of occasions the Fascinate suffered network connection errors and we had to reinitiate searches.

The Droid X started streaming high-quality YouTube movies in less than 10 seconds; it often took more than a minute for identical videos to load on Fascinate, and then would sometimes play only the first few seconds and then pause permanently.

More troubling than this lack of alacrity is the dimness – almost a dinginess – that overcomes the Galaxy S AMOLED screen while using the browser, a mysterious phenomena we’ve noticed on all four Galaxy models.

Statistically, the Droid X has a slightly superior snapper – 8 megapixels versus the Fascinate’s 5-megapixel imager. But you’ll more than likely use the widescreen, near-panoramic 6-megapixel setting on the Droid X, which we’ve used for comparison here.

While the Droid X has a physical shutter key, the Fascinate has a touch release, which means you’ll be less likely to shake to phone while snapping and therefore less likely to get a blurred image, especially in low light.

Indoors and out, the Droid X snaps dimmer, but sharper-edged shots, with more contrast than the Fascinate, which provides brighter and slightly more colorful images. The Droid X’s dual-LED flash also tends to cast more shadows than the Fascinate.

The Fascinate provides a wider field of vision – you’ll get more in the frame, which is great for scenery and group shots where you don’t have a lot of back up space – even with the Droid X in widescreen 6-megapixel mode. The Fascinate also doesn’t lower resolution when you zoom in.

The tables are turned in video record mode, although neither phone shoots footage as sharp as you’d get even from a Flip or similar standalone shoot-and-share camcorder. The Fascinate’s videos are brighter, truer colors for outdoor videos, with less herky-jerky motion. This is because the Fascinate shoots at nearly 30 frames per second, at around a 1 kbps data rate; the Droid X captures video only at around 24 fps and 8 kbps. However, even with this specification disadvantage, the Droid X maintains color better and lower grain indoors.

The Droid X also has a separate camcorder app, so you don’t have to go through the camera to get to video recording the way you have to on the Fascinate.

Overall, the Droid X’s camera has a slight superiority in still photos, but you’ll get more of what you shoot with the Fascinate, less chance of image blur on low light, and far superior HD video capture.

Over the course of a weekend, we performed the same tasks equally on each phone, most simultaneously. On Monday morning, the Fascinate still held 44 percent of its battery life, while the Droid X held just 10 percent.

Not by much, but we prefer the Droid X, primarily because of its faster, more reliable Web connection and brighter screen for browsing, as well as the surety of the physical control keys. The quirky backlighting on the Fascinate’s touch controls and hidden @ symbol also serve as dismerits, but these are admittedly personal preferences. Your choice is likely to be equally subjective. For instance, if you’re outdoors a lot, and shoot a lot of photos and video, the Fascinate is a better option. While heavier, the Droid X feels more substantial and less fragile, which may be a deciding factor for executives and self-admitted klutzes. For the less-than-anal-retentive who don’t always charge their phones every night, the Fascinate’s more robust battery life will be a life saver. In other words, there is room for two heavyweights in the Verizon superphone ring – until the iPhone shows up to challenge both.