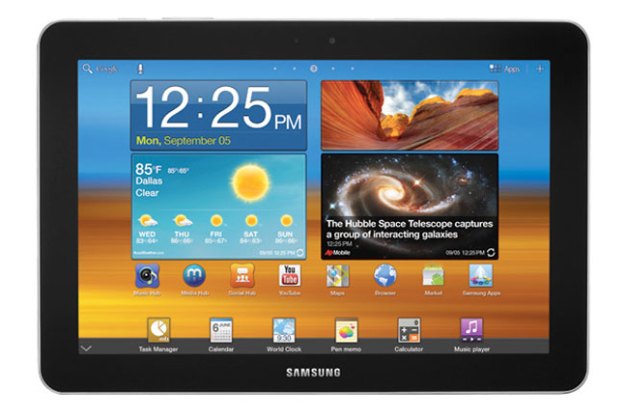 “The Samsung Galaxy Tab 8.9 is just more comfortable to hold and operate than anything else outside of the iPad.”

Samsung is hell bent on beating the iPad at its own game. Apple may not appreciate the Korean manufacturer’s dedication to attacking the tablet market, but we do. Unlike Apple, Samsung has been experimenting with every screen size imaginable from 4 inches all the way up to 10.1 inches. With the Galaxy Tab 8.9 though, we think they may have hit the sweet spot. While a lot of Android tablets feel slightly too large and heavy at 10.1 inches, the Galaxy Tab 8.9 is just thin enough, light enough, and small enough to work as a tablet. While we like the Galaxy Tab 10.1, the 8.9 proves that sometimes size does matter.

Like the Galaxy Tab 10.1 before it, Samsung’s 8.9-inch tablet is the best looking tablet outside of Apple’s iPad 2. It bests Motorola’s Xoom, Toshiba’s Thrive, Acer’s Iconia Tabs and everything else in almost every area (except price and ports). The 8.9 is only 8.6mm thick and weighs just about a pound (15.98oz, 453g). It is 0.2mm thinner and a third of a pound lighter than Apple’s tablet. The savings in weight come from the use of a plastic shell in lieu of the aluminum shell the iPad uses, but as with the Tab 10.1, we think the company did a good enough job bringing a premium feel to the tablet, despite its plastic shell. This feels much more high-end than some of Samsung’s very plasticy, shiny phones. If you only glance at it or encounter it in passing, you’ll likely think it is made of metal.

The slightly smaller screen size compliments the weight and thinness of the Tab 8.9 perfectly. Unlike 10.1-inch screens, this 8.9-inch display sacrifices no detail or resolution (it’s still 1280 x 800 pixels like the 10.1), but manages to be just small enough to allow thumb typing across the screen when in landscape mode, among other benefits. Combined with Samsung’s improvements to Android 3.1 (Honeycomb) — which we delve into below — the 8.9 is perhaps the most comfortable tablet to use. It has enough screen space to use as a media player, e-book reader, or full Web browser, but is also small enough to thumb type on and casually carry with you. 10.1-inch Android tablets have been too large and heavy by comparison, and 7-inch Android tablets are almost too small, feeling more like a smartphone than a full-fledged device. If there is a sweet spot, this is it, or very close to it.

Unfortunately, the Galaxy Tab 8.9 shares the same downside as the Galaxy Tab 10.1: There is only one port on the whole tablet. It’s a proprietary port on the bottom, and it looks just like the Apple iPad and iPod port. If you want to connect up a computer via USB, or a TV via HDMI, you’ll need to buy an adapter. We definitely wish that Samsung had used Micro USB for its charging solution, but the lack of a port is not a deal breaker for us. If it is for you, you should also know that the battery is not removable and there is no microSD card slot.

Under the hood, Samsung has packed in the same specs as the Galaxy Tab 10.1, meaning the same specs that almost all Android tablets have. That includes a 1280 x 800 pixel touchscreen, 1GHz dual-core Tegra 2 processor, 16GB or 32GB of internal storage, and 1GB of RAM. Samsung’s 3-megapixel rear camera is fairly weak when compared to some competitors, but its screen makes up the difference. It’s brighter, more vivid, and has a wider viewing angle than most other tablet screens we’ve used.

As for raw power, the units Quadrant score (a benchmarking app) is about 2,450, or about 450 better than the Galaxy Tab 10.1. We’re not sure how it outperformed the 10.1, but it did consistently. For reference, a Droid X (1GHz single-core Android phone) gets a score of about 1,300 and the original Droid has a score of about 300. This test measures CPU, memory, I/O, 2D graphics, and 3D graphics.

As for battery life, we’ve been using the Tab for several weeks now and have only charged it twice. Thanks to Samsung’s built-in battery-saving software, it runs longer between charges than any tablet we’ve seen. We have no complaints about the 8.9’s battery life. We can only hope that more tablets are able to do what Samsung’s done here.

The size and weight of the Galaxy Tab 8.9 are half of what makes it a better tablet to use than some of the competition, but Samsung’s modifications to Android 3.1 (Honeycomb), collectively called TouchWiz, account for most of the other half. Many tablets use Google’s default design, which looks a lot like an interface from Tron: Legacy. It’s cold and lacks personality.

We can’t say that Samsung’s tablet has more personality, but it sure feels much warmer and more pleasant to use. Glowing edges have been replaced with thin edges, colors, and whites. Samsung has replaced the ugly navigation buttons and clock with a slick, almost Windows Phone-like design. Useful new widgets for weather, email, social networking, calendar, and clock are also pleasant and look much cleaner than Google’s designs. Samsung has also added hot buttons to turn on and off Wi-Fi, notifications, GPS, rotation, and sound without having to enter settings. Occasionally, Google’s default theme creeps in, like when turning up and down the volume, and its an unwanted distraction, but luckily this is rare.

Most of Samsung’s apps are so-so. For some reason, manufacturers seem hell bent on replacing Android’s built-in email app and music player, and Samsung is no different. You’ll find Samsung’s attempts here somewhat underwhelming, as is Samsung’s app store. We like the built-in file manager and memo app, but that’s about it for built-in software. Some apps are able to be removed, but not core Samsung apps.

The most interesting change up to Android Honeycomb in the Galaxy Tab is Samsung’s addition of six Live Tile widget apps. The task manager, calendar, world clock, pen memo, calculator, and music player are all available as miniature apps via a tray at the bottom (just hit the arrow pointing up in the center). These apps come up as movable, windowed applications with an X in the upper right, much like what you’ve been used to in Windows and Mac operating systems for 20 years now. They aren’t resizable, and they don’t honestly serve a huge purpose, but we like the concept. Moving forward, we hope Google makes Android apps more flexible like these, allowing apps to take up less than the full screen.

The Galaxy Tab 8.9 will not get famous for its camera. At 3 megapixels, it’s not nearly as good as the camera on the BlackBerry PlayBook or some other tablets—though it may be comparable to the iPad’s anemic camera. It has a decent flash, but the camera’s focusing speed and time-to-shot is quite slow. You can auto focus on anything by tapping on the screen, but again, it’s slow. We found that shots had a decent amount of color, but low and moderately lit shots came out quite grainy. Video is equally weak. The front-facing camera is 2 megapixels.

With Android 4.0 (Ice Cream Sandwich) just around the corner, the entire interface of the Galaxy Tab 8.9 may change soon, but from the looks of it, Google’s new OS appears to take some cues (like the font) from Samsung’s TouchWiz UI. We hope that the interface will remain vibrant and the widgets will stay through the transition, but regardless, today the Galaxy Tab 8.9 is a fantastic Android-based tablet and quite possibly your best alternative to the iPad 2. By manufacturing a tablet at every size, Samsung has stumbled on a great medium between the hefty 10.1-inch tablets and the diminutive 7-inch tablets. We’ve had the Xoom, PlayBook, and other tablets sitting around our office all year now, but the Galaxy Tab 8.9 is the first device we’ve used on a daily basis. It’s just more comfortable to hold and operate than anything else outside of the iPad. We only wish, at $470, it was a bit cheaper.