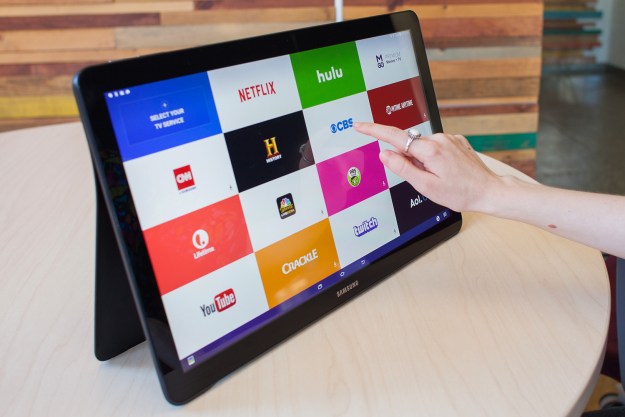 “The Samsung Galaxy View is too cumbersome, underpowered, and expensive to recommend.”

Tablets are having an identity crisis, and Samsung’s Galaxy View is dead center in the drama. After a few years of growth, the touchable shine has worn off of tablets and many folks are realizing they’re probably better off with a larger phone or a better laptop. A few devices, like the Surface and new iPad Pro, are desperately trying to survive by mimicking laptops, blending in with a higher class of computer, and others are clinging to smaller 7 and 8-inch designs — the size of a notepad, or a phone for Andre the Giant.

Always the relentless innovator, Samsung is taking a risk with a new idea. What if, instead of a buying a tablet as a big phone, or a subdued laptop, you bought one purely as a TV replacement? Say hello to the Galaxy View, a black 18.4-inch monstrosity of a tablet that weighs 5.8lbs and is built solely for folks who want a TV they can lug from room to room in their home. Don’t believe us? It even has a built in stand and handle.

We’ve been using the View for about almost two weeks now, and to say our feelings are mixed about Samsung’s newest hybrid would be an understatement.

This is one huge tablet, seriously

It’s big and it’s heavy. At 5.8lbs, carrying the plastic Galaxy View around is a chore, and you’re never going to hold it or take it out of the house. It weighs about twice as much as most thin laptops these days, and even with a handle, it’s a workout. For its size, the View is relatively thin at half an inch (12mm), but it does have a large bulge on the back, which is masked by a permanently attached stand.

The plastic stand is helpful, but flawed, allowing you to set the Galaxy View up in an upright landscape position for TV viewing, or in a reclined 30-ish degree position that you might use if you had it on your lap. Both options work well enough, but there is no third option. You can never detach the stand from the tablet and since it’s just one big piece of plastic, the Galaxy View will never lay flat. Most of the time, this is fine, but if you want to stuff it in a backpack, computer bag, or luggage to take it somewhere, you’re dead out of luck. We could not comfortably fit the Galaxy View inside any backpack or laptop bag we had in our DT office. And if you do manage to stuff it inside a bag, be prepared to worry about it the whole ride because it will be a tight, uncomfortable fit.

With its size, the View could make for a pretty interesting drawing tablet, but Samsung isn’t interested in its Note-like capabilities. No stylus is included, and due to its power (which we’ll touch on later), artsy folks won’t find a lot to love here.

Built for TV streaming, not great at much else

Once you pry it out of your bag, using the View how it’s intended (on a table) is easy enough. It’s only built for widescreen TV viewing, so it has a 16:9 aspect ratio and 1,920 x 1,080 pixel screen, which makes some sense since all video content comes at that resolution. We had a fun time streaming Hulu and Netflix over Wi-Fi on the tablet, though it was almost too big for us. You can’t as easily place this tablet next to your bed or on your coffee table to watch TV. It’s big enough that you need a bit of distance to watch it properly, and it needs a decently sized surface to sit on.

At 5.8lbs, carrying the plastic Galaxy View around is a chore.

However, that 1080p screen resolution is lower than many tablets, and individual pixels are noticeable because of its 18.4-inch size. Samsung likely also went with a lower resolution to help with battery life and power, but lagginess and slow performance is one of the View’s biggest problems.

On paper, the View doesn’t look too bad. Aside from the screen, it has a Samsung Octa-core 1.6GHz Exynos 7580 processor, 32/64GB of storage space, 2GB of RAM, and a 2.1-megapixel selfie cam in front. Sadly, in practical use, the View gave us a headache more than once. Browsing the Web using Google Chrome can become a slow, laggy torture experiment at times, and the custom home screen Samsung built isn’t always responsive on your first swipe. In benchmark tests, the tablet performed far worse than even last year’s tablets, like the Nexus 9. This is despite its high price of $600 (32GB). In fact, the closest competitors we could find to its power came out around 2012. The Nexus 10 tablet was in its league, which is three years old, and the Galaxy S4 Mini, an older phone from mid 2013. The View performed somewhat erratically and poorly in common tests like 3DMark, GFX Bench, and AnTuTu.

On a bright note, the two 4-Watt speakers offer robust sound for a tablet, and Samsung says they’re angled outward to offer a 360-degree sound experience, so you can squeeze a few friends around it.

If you’re hoping to use it as a second monitor, or anything like that, you should also know that this is not a TV. It doesn’t have HDMI, coaxial, or any other ports that a true TV needs. It only has a lonesome Micro USB port and MicroSD slot.

Actual numbers and ports aside, we were disappointed that a top-priced $600 tablet in 2015 performed so poorly in structured processing tests and actual use.

Samsung put some effort into a new front home screen for the Galaxy View as well, which suggests and shows a lot of streaming apps like Netflix, Hulu, ShowTime, LifeTime, YouTube, Crackle, and Twitch. Sadly, this screen is not customizable at all. For example, we installed HBO Go, but could not add it to the streaming homepage, nor could we remove apps that we had no interest in, like AOL On. The page is a nice idea, but should put users first. Or Samsung should let users disable it.

If you want a massive tablet, you should curtail your size and look into buying an iPad Pro or Surface Pro 4.

Samsung is also working closely with cable TV providers and streaming companies to offer deals to customers. So if you use Time Warner Cable, Dish, or some other cable provider, you can link the View home screen up with that and get live TV on your tablet when you’re away from your TV. Currently, only DirecTV works.

Outside of the home screen, there is a nice option to display a screen saver of custom images, which plays when the tablet is idling. It’s a pleasant visual, though we’re used to tablets just shutting off, so you’ll have to get used to turning off your screen if you don’t want the screensaver to start up.

Samsung’s custom version of Google’s Android 5.1.1 Lollipop operating system is here, and if you’ve used a Samsung tablet or phone in the last couple years, you know what you’re getting. The menus scale nicely to a device this size and Samsung keeps its apps clean and easy to use. You won’t encounter a ton of lag just navigating around, but it will creep up once you start exploring and downloading apps.

Finally, we have a mixed relationship with Samsung’s onscreen keyboard. There’s nothing wrong with it, really, and the addition of a number pad is nice (and a little retro), but it’s tough to touch type on a screen this big. You almost have to try to type with all your fingers, like a regular keyboard, but without the tactile response, you’ll find yourself hitting the wrong keys. It’s a definite new skill Galaxy View owners will have to learn. If there was ever a touch screen that could replace a keyboard, this might be it.

The 5,700mAh battery in the Galaxy View has held up decently well. We estimate it should last about 7-8 hours on a charge. Its idle time is up for debate. On one occasion, we had it drain from full to nothing in just a few days, which was disappointing. But other times it has held up longer. Overall, there aren’t any alarm bells going off in the area of battery life.

Samsung’s standard manufacturer warranty is normal for a mobile device. A Galaxy View is covered for 12 months after the day of purchase for defects that occur under normal use, though Samsung determines “normal use”, so it can deny any claim it wishes. Don’t expect to get a repair or replacement if you get a Galaxy View wet or drop it, but if the battery gets very bad before a year is out, Samsung may replace it. You can find full details on Samsung warranties here.

The big question here: Should you buy a Galaxy View? The simple answer: No, probably not.

Unless you’re so desperate for a huge 18.4-inch tablet that you care about almost nothing else, there are far batter options. If you really want a small TV, we recommend actually purchasing a small 24-inch TV. You can buy several of them for the $600 price of the Galaxy View, and have money left over for a Chromecast or Roku to connect it to your apps and phone.

The Galaxy View has a MicroSD slot, so take advantage of it.

This extra large laptop bag will be tight, but should fit the Galaxy View, if you need to transport it.

This off-the-counter drug will ease the headache that sets in after you realize you spent $600 on this tablet.

And if you want a massive tablet, you should curtail your size and look into buying an iPad Pro or Surface Pro 4. They are higher priced than the Galaxy View, but if you’re willing to plunk down $600, we think you should wait an extra month and spend $800 and buy something you might actually like and will be useful. These tablets are about 13 inches, but that size is still huge, and still somewhat portable. They’re about the size of a medium-sized laptop. Hell, for these kinds of prices, you could purchase a nice laptop, as well.

Finally, if you can live with a smaller, but still decently sized 10-inch tablet, we recommend the iPad Air 2, Galaxy Tab S2 10-inch, and Nexus 9, which is a scoot smaller.

Samsung has a good idea here. A lot of people, including me, use their tablets to watch TV. But at the high price of $600, this just isn’t the tablet anyone should use. If you do buy one, however, you’ll have the dubious honor of owning a tablet that looks suspiciously like one of the “big area touchscreens” in the Fox News studio.