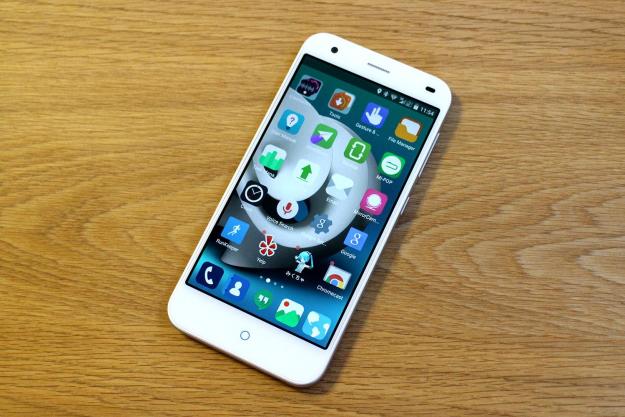 “ZTE’s Blade S6 showcases how well Android 5.0 and a 64-bit chip work together, but it’s not the premium device its sharp looks suggest.”

ZTE’s Blade smartphones have always been cost-effective devices for those who aren’t worried about anything other than owning an Android smartphone. It doesn’t matter which one, just so long as the price is right. The Blade S6 is ZTE’s latest model, and that all has changed: It’s the first ZTE Blade phone you’ll actually choose for a good reason, and that’s an important distinction.

Why will you want to buy it? It’s fast, attractive, comes with the latest software, and still manages to be very well priced. But it’s not perfect. Let’s look closely to see whether the negative aspects outweigh the positives.

We’ll get this out of the way right at the start: The Blade S6 looks a lot like the iPhone 6. The rear panel curves around the edge of the chassis, the sides seem to have an almost identical angle, and the camera lens nestles in the top left corner on the back. It even shares the same 2.5D curved glass screen, although it covers a slightly larger 5-inch display here.

If there’s a problem, it’s one for the lawyers — all I cared about was how good it looked and felt in my hand.

Because it more or less copies the iPhone 6, the Blade S6 looks awesome. So what if it shares the same style as a really good-looking, incredibly popular phone? If there’s a problem, it’s one for the lawyers, because all I cared about was how good it looked and felt in my hand. The curved case and 2.5D glass make it astonishingly comfortable to hold. No sharp edges, no pointy bits — Just an ergonomic body, perfect for cradling in the palm of your hand.

ZTE hasn’t produced a premium device with the Blade S6 though. Although that rear panel does a very good impression of brushed metal, it’s actually plastic. Here’s the first, and probably the biggest downside of the Blade S6: It’s not very nice plastic. It has a pleasant touch, but it creaks, groans, and flexes in all the wrong places. The power and volume buttons are also plastic, don’t have a particularly solid action, and also make unpleasant sounds when pressed.

It’s a real shame. Even though the cool 2.5D glass gives the Blade S6 a premium air, having the phone audibly complain when you hold it in a certain way quickly shatters the illusion.

Let’s get back to the positives. The Blade S6 runs Android 5.0 and uses a Qualcomm Snapdragon 615 octa-core processor. The phone brings the 64-bit optimized version of Android together with a 64-bit chip, and it’s a combination that everyone hopes will equal great performance. So does it?

The short answer is yes. Android on the Blade S6 is smoother than Egyptian cotton, and slicker than a freshly valeted Ferrari. ZTE has maintained much of Lollipop’s Material Design styling, and the MiFavor 3.0 UI is surprisingly subtle, but there’s still no app tray. This means you can even make the home screens look like they do on iOS if you really must. When I compared the Blade S6 to the Nexus 5 — which also runs 5.0 but with an older, 32-bit processor — the difference between the two was noticeable. For speed, precision, and overall smoothness, on the Blade S6 gives the LG G3 a run for its money.

It’s not without a few quirks though. For example, the delay between pressing the sleep/wake key and the screen coming alive was sometimes longer than expected, and I’d often press the button again thinking it hadn’t registered. This would inevitably confuse everything because the screen would appear then disappear. On a few occasions, when I pressed the key again, the phone would just reboot. Additionally, the icons sometimes didn’t show up when the phone is unlocked, but a tap on the screen solved this. I’ve also seen this happen on the Nexus 5, however, so it could be a Lollipop bug.

Neither Angry Birds Transformers nor Love Live! School Idol Festival revealed any gaming performance problems, with the pair running exceptionally well. The phone would get warm, but never hot. A Geekbench 3 test gave the Blade 6 a multi-core rating of 2,395 — That’s around the same as the OnePlus One and Nexus 5 — but Quadrant refused to return a reliable result.

ZTE uses gesture controls to separate the Blade S6 from the crowd, and while they aren’t quite as interesting as the Star 2’s voice controls, they’re still effective and work well. Many we’ve seen before, such as raising the phone to your ear to automatically answer a call, but there are a few surprises.

The phone audibly complains when you hold it in a certain way, shattering the premium illusion.

For example, Air Gesture is very cool. With the screen off, holding the volume key down and drawing a V-shape in the air with the phone automatically plays music. Drawing the letter O pauses the playback. Sure, it won’t be something you use everyday, but it did come in handy when I was on the treadmill. The shake that activates the flashlight from the lock screen was also helpful.

The gestures are even better for the camera. With the screen locked, holding the phone in landscape and pressing the volume up button, while lifting it like you’re about to take a picture, opens the camera app immediately. I used this quite a lot, and had a decent, 90 percent success rate with the gesture. The problems only occurred when the phone didn’t register enough movement. For example, taking it from a pocket was fine, but lifting it while seated at a table wasn’t.

On the subject of the camera, ZTE has fitted a 13-megapixel autofocus lens to the rear, and a 5-megapixel wide-angle cam above the screen. It’s a Sony IMX214 sensor, which is also used in phones such as the OnePlus One and the Huawei Ascend P7. The performance is very similar to the camera on the OnePlus One. Color reproduction is accurate, and low-light images taken inside are good too. However, the single LED flash limits its usefulness in darker environments, and dull, overcast days made for some poor outdoor photos. On sunny days, and in normal conditions, the pictures it took looked sharp and well balanced.

There are various modes including HDR, panorama, and a burst mode named Group, plus a selection of live filters, and an expert mode. Activate this, and you have control over the white balance, exposure, ISO, and focal points. There’s also a clever way to mess around with the exposure, where you drag a crosshairs across the screen to adjust it. We’d previously seen this feature on ZTE’s Nubia phones.

Alternatively, the Camera360 app is installed, with lots of different modes for the front and rear camera. It’s more complex than the standard app, but not necessarily in a good way. It has good editing tools, though.

Swap to the front camera, and selfie fans will like the beautify mode. The wide-angle lens takes great pictures, and it’s happy in low-light situations too. I found it equal to the G3, and it easily surpassed the Nexus 5. Pitting the Blade S6’s rear camera against a Motorola Moto G for low-light selfies and rear cam use resulted in far more impressive images from the ZTE phone. Don’t forget, the Blade S6 costs only a little more than a 4G Moto G at $250.

At launch, the size of the battery was a concern. It’s a relatively standard 2,400mAh capacity, but after using Bluetooth all day, snapping some pictures, using RunKeeper to track a 45-minute run, and the usual messaging and social networking interactions, it lasted about a day and a half. Take Bluetooth out of the equation, and two normal, working days would be achievable. You can thank the 720p screen and the efficient processor for making the most out of the cell’s capacity.

ZTE has installed a collection of apps — about ten in all — but those not essential to the phone’s operation can be uninstalled. The phone has 16GB of internal storage space, with about 8GB available for the user. The MicroSD card slot happily took my Samsung 64GB card. The Blade S6 is a dual-SIM phone, but it’s worth pointing out it takes a nano-SIM, just like the iPhone.

Up until now, it’s only the plastic rear panel that lets the Blade S6 down. However, now we get to the other problem. It supports LTE bands 1, 3, 7, 8, and 20, which means the Blade S6 connected to a 4G network without a problem in the UK, but it won’t do so in North America. That said, on this side of the pond, there were no problems making calls, and no complaints from the person on the other end of the line.

The best ZTE phone yet?

fitBag Classic sleeve for Blade S6 ($27.90)
If you need a nice sleeve for your Blade S6, this genuine Alcantara pouch with its microfiber lining will keep your phone safe and clean.

Anker 2nd Gen Astro Mini ($16)
When your phone inevitably runs out of power, pull out one of these great portable battery packs from Anker.

Moshi Mythro earbuds ($30)
These headphones are among our top-rated budget earbuds for under $50, and you’ll want a pair for listening to tunes on your Blade S6.

It’s never easy summing up how a smartphone is to use each and everyday. Like a new pet, there’s a period of adjustment where the two of you bond, or sometimes not. In an odd way, this applies to phones. Could I live with it everyday, or would I be desperate to go back to my usual Android smartphone even before the review was over?

The Blade S6 and I bonded rather well. There’s no annoying software, very little extra setup outside of the usual Google processes, and the battery lasts a sensible amount of time, even when connected to an accessory. I never thought twice about slipping it into my pocket each morning, and didn’t miss my regular Android phone for the duration of the review. It did everything I wanted it to, without any fuss. I’d want to find a case though, because that may stop the infernal creaking.

It’s a pain the Blade S6 doesn’t have 4G support in the U.S. too, because at $250, it’s an extremely competent phone with a highly competitive price tag. Outside of the ZTE Nubia hardware, the Blade S6 is the best ZTE phone I’ve used.