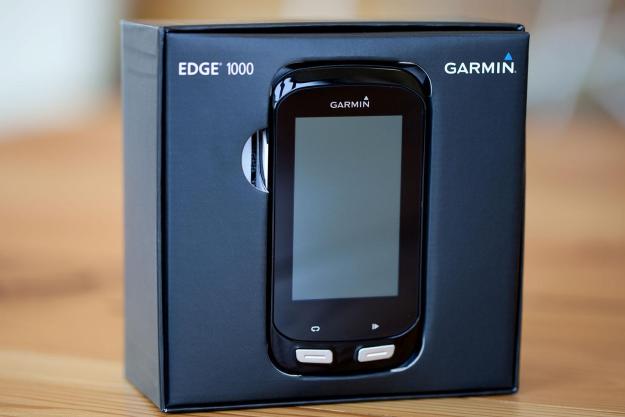 “The Garmin Edge 1000 is a data junkie’s fix that makes you a better rider. And without data, a ride is just a ride.”

You just dropped a few thousand on a new bike. Should you spend another few hundred on a biking computer as well? Absolutely.

Garmin’s Edge 1000 goes well beyond merely offering mapping and GPS, including heart rate monitoring, a speed/cadence sensor, Wi-Fi connectivity, and anything else an avoid biker could ask for. The device makes some marked improvements over its predecessor, the Edge 810, but won’t replace it. Rather, the Edge 1000 offers a few upgrades including a larger, easier to read screen, base mapping and routing, a capacitive touchscreen, and more.

Sure, the Edge 1000 won’t pedal for you, and likewise it won’t cook that after-workout carb meal your body craves. But when it comes to everything else, Garmin’s got you covered.

The Garmin Edge 1000 measures 2.3 × 4.4 × 0.8 inches and weighs just 4 ounces. It can be purchased as a standalone unit ($599) or as a bundle ($699). Both packages come complete with an out-front mount, stem mount, device tether, a USB cable to connect to your computer for charging, and preloaded maps. The bundle adds a heart rate monitor and a speed/cadence sensor, which don’t require magnets or calibration (more on this later).

For those unexpected squalls and showers, the Edge 1000 is water-resistant: Per an IPX7 rating, you can submerged it in a meter of water for up to 30 minutes, though I didn’t personally test this claim. The 3-inch color touchscreen adjusts to light conditions during your ride, and the capacitive sensors let you use it even with riding gloves on or sweaty fingers. Improvements to the touchscreen let you use it vertically or horizontally, much like a phone. (The horizontal view made mapping features easier to use while riding.) The screen feels crude in comparison to a modern-day iPhone or Android phone, and initially I was disappointed by the lackluster display. That’s the LCD screen, which simply doesn’t compare to the OLED screens in many new phones. Garmin says the device can go 15 hours on a single charge, though 10-12 hours was a bit more realistic in my experience.

The Edge 1000 includes Wi-Fi, Ant+, and Bluetooth 4.0 connectivity, a cornucopia of wonderful connectivity. Wi-Fi let me transfer data wirelessly from open hotspots. This means no need to connect to a computer to transfer routes and ride metrics — it also just syncs automatically when you roll into the garage. Bluetooth lets the device pair with a smartphone, so incoming calls and text alerts display on the device itself — a great feature. My iPhone now comes out of my pocket only when I absolutely need it. You won’t be able to respond from the Edge 1000, but at least you’ll know when someone is desperately trying to reach you.

The built-in Wi-Fi also lets you rapidly download map data, while GPS provides turn-by-turn directions along with the ability to track back to your starting point. The device is even capable of connecting to a host of ANT+ sensors, including heart-rate monitors, cadence sensors, and power meters, like Garmin’s Vector, a pedal-based power meter that measures total power, left/right balance, and cadence. And if you use Shimano’s DI2 electronic shifting systems, the Edge 1000 can display what gear you’re in on screen.

Riders can also add a small remote control (as an accessory for $49) that attaches to your handlebars and provides access the most commonly used features. Pretty awesome!

Much better mapping — but still imperfect

The Edge 1000 comes with base maps from open-source mapping project OpenStreetMap (OSM). OSM is incredibly accurate and has become much simpler to use over time, when compared with older versions of the software. With the new maps, Garmin adds a routing function, which let you plug in the distance you want to ride before suggesting routes to take. It’s handy if you’re in a new town searching for the best way to a destination, or want to find an afternoon ride.

It’s handy if you’re in a new town searching for the best way to a destination, or want to find an afternoon ride.

You can do the same thing using a personal computer and a program like Garmin Connect or Strava, but having the ability to construct routes directly on the Edge 1000 without a PC is a definite advantage. That said, mapping routes is still much easier through applications like Ride With GPS (for iOS and Android), though doing so requires you to plug the device into a computer to drag and drop the .GPX file onto the device.

OSM mapping is a major upgrade. Maps on the Edge 1000 now include routable roads and bike paths, elevation data, points of interest, and address search. Mapping data is also stored on the Edge itself, so your access to navigation and performance capabilities runs independently of cellular coverage. Map updates are also free!

Garmin has also added Strava-like segment challenges, meaning you can see segments on the Edge 1000 and race against them in real time. The system shows riders how far ahead of others’ pace you are, or how far behind — which may provide a little extra motivation. Segments are limited compared to Strava, but this will likely change if more riders convert from iPhones and other bike computers to Garmin.

Turn-by-turn directions are great and include street names, which makes it easy to navigate from the road. But if you simply want to follow a line on the map, you can that too. Be warned, it’s very easy to stray off course. The first few times I tried this feature, I ended up lost (one time straying nearly 15 miles off of my intended route). But I do like that the Edge 1000 also shows you the exact time and distance to your next move as you approach it. It fails occasionally, but as I have gotten used to the device, recalculating and rerouting has gotten much easier, thanks in part to the ability to pinch and zoom in on the map view.

Connectivity and sensors: A huge upgrade

The speed and cadence sensors let the Garmin calculate distance traveled, even when GPS is not available. Unlike previous models, these sensors do not rely on a magnet passing a switch but instead use accelerometers to determine the rotational speed of the rear wheel and cranks. Simply connect the cadence sensor to the left crank using the supplied rubber strap, and wrap the speed sensor around the rear hub.

Unlike past models, neither requires calibration. The speed sensor automatically determines the circumference of your wheel; cleverly, the Edge 1000 can take speed and distance from the sensor rather than from GPS, which makes it more accurate.

The Garmin Edge 1000 comes with a limited 1-year warranty to covers all of things you’d expect — manufacturing defects, charging issues, light water damage due to rain for example, or connectivity issues. In these cases, Garmin will replace the device, free of charge. Crash it, drop it, or submerge it in water, and you’re pretty much SOL, though in some instances, Garmin will replace the device with a new one for $130.

An interface so simple, any smartphone user can use it

Overall, the interface is pretty intuitive, though setting the device up took some time. Thank God for manuals, YouTube, and access to other riders, who helped tremendously as I customized the device and uncovered a host of rich and useful features including Workouts, which let me select from warm-up, interval, recovery, rest, or cool down. Just select a time period, distance, or the number of calories you’d like to burn and pedal away. You can even set a target heart rate.

Capture all the action on your next ride.

The ultimate system to monitor cadence, power, and more.

Security for your noggin!

When you’re done riding, upload all of your data to Garmin’s website and analyze a ton of detailed metrics about it – on your computer or on your smartphone via the Garmin Connect app (available for iOS and Android). Average cadence, speed, vertical ascent, heart rate, power, it’s all right there in front of you. And this is what I love most about the Garmin Edge 1000. Without this data, a ride is just a ride. There’s little way to understand when you were able to charge and when you might have bonked; or the relationship between vertical ascent, cadence, and speed; or how you compare to other riders along the same segment.

The Garmin Edge 1000 is a data junkie’s fix that makes you a better rider. It’s a sleek and powerful device with an impressive amount of functionality that almost guarantees to never get you lost. All of this functionality and connectivity comes at a price ($699 for the full bundle), but for riders serious about performance and constant improvement, the Edge 1000 delivers well beyond its price.