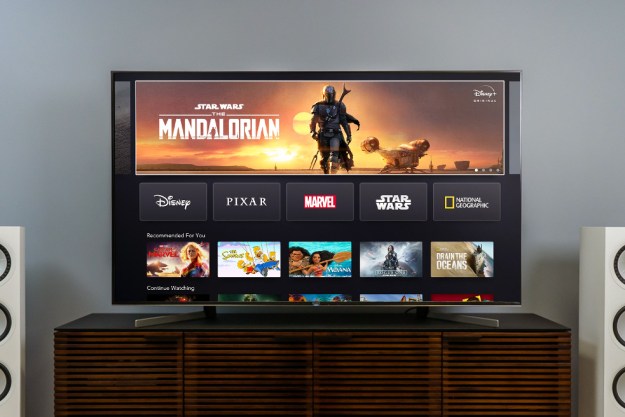 “While the interface is rough, the allure of Disney's best films and shows will be difficult to pass up.”

For months leading up to its debut, it was easy to think ofDisney+ as yet another streaming service. But as it moved closer to launch date, the possibilities became more enticing. Imagine it: The gleam of a century’s worth of groundbreaking properties, from Mickey to Marvel, all on demand. It’s a fantastic idea, especially at $7 per month.

A streaming service is a lot more than an idea, though, and as Disney+’s rocky launch reminded us, delivering massive files into millions of homes through a scattershot of pipelines isn’t easy. Studio powerhouse or no, Disney was competing against rivals who have been at it for over a decade, and initially, that method of delivery was pretty dang underwhelming.

However, in the months that followed, Disney’s streamer has gone from a clunky, buggy, work in progress to something closer to the polished perfection of Disney’s many other ventures.

A Netflix clone this ain’t

Firing up Disney+ for the first time reveals plenty to like about its surface-level design. A pleasing layout of panels at the top divides content into five pillars: Disney, Pixar, Marvel, Star Wars, and (because Disney owns everything) National Geographic.

You can create your own avatar (and within its settings disable background videos), download titles to view offline, and stream on up to four devices at once.

Below the main panels, you’ll find shows and movies broken into helpful categories that recommend what to watch based on your viewing habits, display the latest additions to the library, and let you continue watching series or films you’ve begun viewing. Further down the home screen are curated collections that change periodically with themes like Animals and Nature, Disney Channel Movies, Beasts and Monsters, Out of the Vault, and Disney Through the Decades, which, as it sounds, categorizes titles from the 1920s up. A familiar control panel on the left side hosts Search and Home icons, and other ways to navigate. As expected, it all looks a lot like Netflix, but with a Disney twist.

In the service’s early stages, many users encountered problems opening the app or launching certain titles due to site overload (a reported 10 million subscribers signed up in the first few days), while slow loading times seemed to be par for the course. There were also bizarre lapses in pragmatic design, including the lack of a Recently Watched or Continue Watching section.

Fortunately, many of the early issues with the service have been addressed, from adding a Continue Watching category to giving users the option to Restart movies or TV episodes (another feature that was missing at launch).

However, some problems still remain — including wonky search functionality. If you want to watch the original 101 Dalmatians, for example, typing “101” in the search pane evokes some live-action films and a straight-to-video animated sequel, but not the original movie. This is because that particular film is designated “One hundred and one” in the library and the search system isn’t smart enough to find it. Some apps helpfully allow for voice search directly in the Disney+ search pane, but finding a particular film should be much easier.

A/V goodness, with a catch

One driving factor behind Disney+’s $7 value proposition is the inclusion of goodies like 4K HDR, Dolby Vision, and Dolby Atmos for select titles at no extra charge. Amazon does this too, but Netflix makes you select its priciest tier for that privilege. This option makes watching Disney jewels like The Empire Strikes Back in 4K HDR with Atmos pretty epic, even if it is the “Extended Edition.”

(Note: As of June 2020, Dolby Atmos is temporarily disabled on Disney+ for all devices due to bandwidth concerns during the coronavirus pandemic.)

But, again, there are some odd barriers. For one thing, like most services, there are multiple device restrictions. Currently, it appears the Apple TV 4K is generally the preferred Disney+ device for both video and audio quality, with Roku’s 4K streaming devices coming in second (namely because they don’t support Dolby Vision). Other devices like Chromecast, Roku TVs, and, surprisingly, the new Nvidia Shield and Fire TV 4K sticks, do not appear to support Atmos currently, but do support HDR.

Everything you need to know about Disney+
How does the service compare to Netflix, Hulu, Amazon, and others? Here’s what you need to know.
By Derek Malcolm, Rick Marshall, Nick Perry

What’s more unexpected is that exactly which titles work as advertised still seems to be in question. Like the Star Wars collection, Disney+’s marquee original series The Mandalorian should support 4K HDR and Dolby Atmos. But unlike Empire, I was unable to get The Mandalorian in Atmos on my Apple TV 4K. Meanwhile, a colleague was able to get the Star Wars films and The Mandalorian in both 4K HDR and Dolby Atmos on a Roku Streaming Stick+. Clearly, there are still some kinks to work out.

(Note: As of publication. Disney hasn’t released a comprehensive list of supported devices for each format, but we expect Atmos support to make its way to more devices in the future. To be continued …)

Having access to the majority of Disney’s best from every generation is awesome, even if the interface — and some aspects of the presentation — continue to present some problems.

If you grew up on Disney/Pixar, your brain will almost certainly fall into the nostalgic sunken place as you scroll through titles from your childhood. From Sleeping Beauty and the Fox and the Hound to Finding Nemo and Toy Story, it’s all there. Well, mostly.

Your brain will fall into the nostalgic sunken place.

Diving deep, it’s clear Disney+ isn’t exactly comprehensive even for older titles, likely due to licensing complications. I’m a big fan of those old Goofy shorts from the ’50s that “teach you” how to do things like drive or ski — the latter is there, but the former isn’t. That’s something of a pattern. A bigger omission is the original Muppet Show, though most of the films are available.

It’s not a huge deal, but here’s hoping everything will show up eventually.

After an initial lag in collecting all of the Star Wars and Marvel content due to licensing deals with Netflix or other conditions, both brands are now essentially complete in the Disney+ library. One or two exceptions remain — such as the notorious Star Wars Holiday Special, which might never see the light of day anywhere — but the service has effectively become one-stop shopping for fans of both franchises.

To its credit, Disney has even accelerated the arrival of some major releases to get them on the service as soon as possible during unique circumstances, with Star Wars: The Rise of Skywalker and Frozen 2 both sent to the service months earlier than initially planned due to the coronavirus pandemic.

The library also contains plenty of nature shows from Nat Geo, and for millennials, there are throwback Disney Channel series aplenty, from Hannah Montana to Boy Meets World.

New additions to the Disney+ library have also come at a relatively fast clip since the service launched, with 5-10 titles added each week — typically on a Friday. This content has included everything from fresh episodes of original series to classic films and TV shows joining the Disney+ library for the first time.

As for Disney+ originals, The Mandalorian is the flagship show on the service, but there’s also a lot of entertainment to be had in reality series The World According to Jeff Goldblum and family-friendly competition shows Shop Class and Be Our Chef, among other original series. On the film side, Disney+ original features Star Girl and Timmy Failure are clever, but not exactly must-see movies.

Disney knows its audience, though, and more recent original series like Prop Culture and Disney Gallery both take audiences behind the scenes on some of the studio’s most popular franchises and add another layer of entertainment to some of the service’s most popular content.

Multiple new Star Wars and Marvel series are on the horizon, but most won’t be available until late 2020 at the earliest (and possibly later due to production delays stemming from the pandemic). In contrast, Netflix has hundreds of original series and thousands of movies, so it’s a quality versus quantity debate, to be sure.

Disney seems to have spent more time shoring up content for its new streaming service than designing its interface, but it has come a long way since those early days of the launch. Disney execs know the allure of all those iconic shows and movies for a monthly fee that’s below what you’d pay to rent two films for the evening is difficult to pass up.

There’s plenty. You have Netflix, Hulu (which can be bundled with Disney+), Amazon, HBO Max, Apple TV+, and the list goes on. What Disney brings is something no one else has, and that’s the real genius of Disney+ (and the impetus behind the streaming wars). It’s something of a content hostage situation. They have it, we want it. And for now, it’s very affordable.

Disney’s new streamer isn’t going anywhere — the mega-studio is in it for the long haul. What’s more, I expect this service to continuously improve as Disney finds its way in the streaming world. Expect even more features and fewer bugs as time goes on.

If you love Disney, you’ll want Disney+. If you’re a fan of even one or two of these franchises, Disney+ makes sense from a sheer cost perspective. However, if you’re only interested in The Mandalorian to see what all the fuss is about and not particularly attached to any of the Disney franchises, you can always sign up for a month, binge your way through the service’s best show, and go back to your preferred streaming services until season 2 is available. The decision will likely come down to how much value you place on access to the Disney vault.