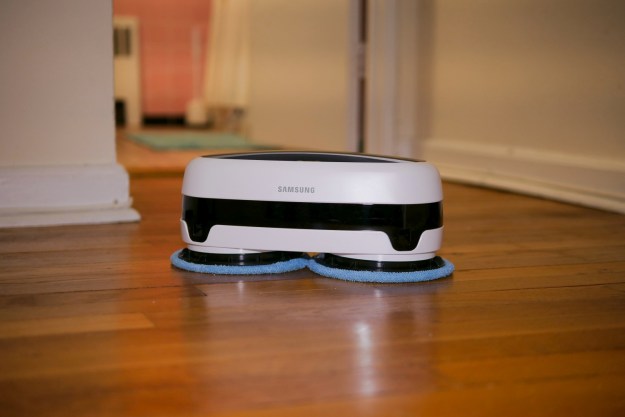 “Don't let its odd design fool you because the Jetbot Mop cleans well and doubles as a handheld cleaner.”

Mopping robots aren’t new. You have your dedicated moppers like iRobot’s Braava series, as well as a growing number of versatile 2-in-1 models that can both vacuum and mop. So what makes Samsung’s latest robot mop special? For one, the Samsung Jetbot Mop is an odd-looking mopper in terms of design. It also doubles as a useful hand cleaner for walls, tile, and much more. While this kind of dual functionality greatly adds value to its $299 sticker price, at the end of the day, the question I want answered above all is whether it can mop well at all.

Rotating for a good clean

The Samsung Jetbot Mop features a compact design that’s half the size of most robot vacs on the market. Essentially, what you have here is an all-plastic bot with a handle on top and dual spinning brushes underneath. What’s interesting, though, is how the Jetbot moves around to clean. Whereas other robots rely on wheels to navigate around, this one leverages the rotating movement of its large brushing pads to move forward, side-to-side, or in some other pattern that reminds me of a do-si-do dance. Due to this implementation, it struggles getting around humps and dividers.

Honestly though, it’s intriguing to watch it in action because it acts differently from what we’re used to seeing. I was expecting the pads to rotate a bit faster, since that would probably help out in getting rid of some tough stains on the floor. Instead, the mother yarn pads I attached to the Jetbot did an excellent job of removing them — although it did take a couple of passes. I’m actually pleased by its cleaning performance because it’s able to remove stains better than the push-mop systems of other robot vacs that I’ve tested. The experience is made better because it’s shockingly quiet during operation.

Unfortunately, the Samsung Jetbot Mop is an inefficient cleaner because it lacks the room-mapping capabilities that many other robot vacuums offer. Cleaning hardwoods and tiles are for the most part random, as it goes straight, diagonal, or a mixture of the two depending on what cleaning mode is selected. For smaller, confined areas like my kitchen, it’s able to mop nearly the entire space. With corners and edges, it seems to try and navigate in straight lines, but it often bumps into something. Due to its random cleaning pattern, I notice that it struggles to adequately cover large spaces — in a couple of instances, there were isolated areas that didn’t get touched at all by the Jetbot.

It’s able to remove stains better than the push-mop systems of other robot vacs.

There were also a few times when it trapped itself trying to navigate around furniture — like the legs of kitchen chairs. Whenever it comes in contact with an object, it follows the typical tactic of moving back a little and then moving forward in a slight angle to get around it. Of course, it all makes for a painfully long and laborious cleaning process. Lastly, it can’t detect surfaces, nor is there a way to set no-go cleaning zones. In fact, I found it moving from the hardwood floors of my living room onto a tiny rug at the entrance of my front door on a number of occasions.

Another key thing to remember here with its cleaning is that it doesn’t disinfect surfaces. Rather, it relies on just water that you pour into the reservoir, which then slowly drips onto the attached cleaning pads. This is similar to other robot moppers, giventhat disinfectant solution could impede their cleaning performance. So yeah, floors are technically mopped, but they’re not being disinfected in the process.

Battery life peaks at 100 minutes, which was more than enough to mop my small apartment. You’ll want to do some moving around of furniture before setting it off to clean to lower the chance that it’ll get hung up trying to get around objects.

It’s not often that a mopper doubles as a hand-cleaning tool, but the Samsung Jetbot Mop does exactly that. Pressing twice on the power button while holding it up in the air initiates this cleaning mode. If you detest scrubbing walls, windows, or tiled surfaces in the bathroom, this mode comes in handy because it does most of the work for you. All that’s needed is for you to apply a gentle amount of pressure as you go over surfaces.

It’s not often that a mopper doubles as a hand-cleaning tool.

Unfortunately, not being able to use cleaning solutions really defeats the purpose of this cleaning mode. The water helps the pads to remove minor stains or streaks, but you’ll want to use a cleaning solution afterward to ensure surfaces are free of germs. For tougher surfaces, like tile, you’ll want to use the mother yarn pads (there’s also a microfiber pad that’s suited for delicate surfaces like windows). The yarn pads are effective at wiping away superficial dirt, but don’t think for an instant that it’s going to be strong enough to remove stuck-on limescale.

I really like that the Jetbot Mop can be used as a handheld. However, I would recommend rinsing off the pads frequently, so that you’re not just pushing around dirty water.

There are a lot of stipulations that need to be met in order to qualify the Samsung Jetbot Mop as a useful bot to have in the home for cleaning. If you can commit to a lot of precleaning taks and don’t mind its random pattern of cleaning, then the $299 Samsung Jetbot Mop is worth consideration.

With its tough plastic body, the Samsung Jetbot Mop seems equipped to endure some minor dings as it comes into contact with objects during its cleaning. Proper cleaning and maintenance will obviously extend its life, but in the event of a defect, there’s a 1-year limited warranty that covers parts and labor. There’s also a 10-year warranty on just the digital inverter motor.

The iRobot Braava 300 Series is a direct competitor that starts at $299 and does a competent job of mopping. It’s also far more efficient and precise with its cleaning, due in part to the advanced navigation system that tells it where it’s going and what it’s cleaned already.

Beyond dedicated moppers, the next logical solution would be to invest in a 2-in-1 vacuum and mopper, like the Roborock S6 Max or Eufy RoboVac L70. Then again, you’re going to have to pay $500-plus to snag them, since they offer advanced navigation, mapping, and mopping functionality.

Yes, but only if you’re willing to put up with some of its compromises because $300 for a dual-functioning mopper isn’t too shabby.

Topics
How often should you use your robot mop
What is a pressure cooker, and how do you use it?
The best and most reliable refrigerator brands of 2022
Samsung SmartThings can now monitor your home’s entire energy consumption
Apple reportedly working on a new iPad-like smart home display
Best Google Home and Google Nest deals for January 2023
Best cordless vacuum deals for January 2023
This is the cheapest air fryer deal you’ll find anywhere — only $20!
Best security camera deals for January 2023
Best Keurig Deals: Get a K-Cup coffee maker from $70 today
5 tips and tricks for the Ring Video Doorbell
The best Apple HomeKit devices for 2023
The best motorized smart blinds for 2023