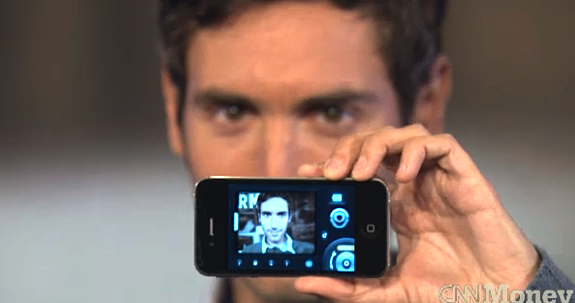 Director Malik Bendjelloul picked up the Oscar for best documentary at the 85th Academy Awards in LA on Monday night for Searching for Sugar Man. To movie buffs, the award may not have come as too much of a surprise, as the film has already won a slew of prizes around the world. But what you might not know is that it’s become the first movie partly shot on an iPhone to win an Academy Award.

In a recent interview with CNN, Bendjelloul said he’d been shooting segments for the film using a Super 8 camera, but eventually the funds for his movie dried up, leaving the 35-year-old Swedish director in a bit of a pickle.

He only needed a few shots to complete the film so tried out the $1.99 8mm Vintage Camera app, which adds a filter to the footage to give a Super 8 effect. To his delight, the results were exactly what he was looking for.

Reviewing one of the sequences in the movie that he shot with the iPhone app, Bendjelloul commented, “It looks like real film, it really does. You can’t tell the difference.”

The vintage camera app will already be familiar to many of you; it’s been in and out of the charts for a couple of years now. But with a story like this attached to it, it’s sure to see sales go through the roof. Hongyu Chi, president of the China-based company behind the app, said prior to the Oscar win he was “thrilled” it had been used in Bendjelloul’s movie. Wonder how he’s feeling now….

Searching for Sugar Man is a movie about 70s musician Sixto Rodriquez, an American singer who, despite being a virtual unknown in his home country, became hugely successful in South Africa.

Of course, it’s not the first time a filmmaker has used  a smartphone to shoot all or part of a movie – in 2011, for example, South Korean director Park Chan-wook used a bunch of iPhone 4 devices for a 30-minute film called Night Fishing, while in the same year a Nokia N8 smartphone was used to shoot the world’s largest stop-motion animation.

Video-editing app LumaFusion to get a Galaxy Tab S8 launch
The iPhone 14 Pro could be a gaming beast, but something is holding it back
The best weather apps for the iPhone, iPad, and iPod Touch
I regret buying my iPhone 14 Pro for 3 big reasons
Relax, the EU’s scary USB-C rule won’t rob you of fast-charging benefits
Apple comes clean with what it really thinks about iPhone 14’s Dynamic Island
Waiting for Touch ID on a new iPhone? This report has some bad news
Is the Apple Watch UItra too big? We took a bunch of photos to show you
Samsung Galaxy Watch 5 Pro vs. Galaxy Watch 4 Classic
Xiaomi’s new phone has a 200MP camera — and its photos are stunning
It’s official: Apple is required to make a USB-C iPhone by 2024
The Google Home app finally has the big redesign you’ve been waiting for
Lenovo’s AirPods alternatives are on sale for just $15 today