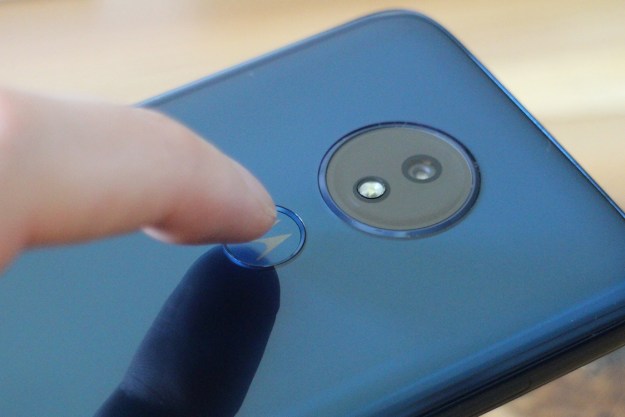 “The Moto G7 Power gives you unbeatable battery life on a budget.”

As the middle child in Motorola’s Moto G7 family, you might expect the new Moto G7 Power to be overlooked, but it may be the only phone in the lineup with a clear purpose, and it’s reflected in the name: This phone is all about the battery life, thanks to its 5,000mAh cell.

At $250, it’s $50 cheaper than the Moto G7, but the Moto G7 Power has more to offer than the runt of the litter – the Moto G7 Play. Apart from its own siblings, it has to beat phones like the similarly-priced Nokia 6.1. But if you’re constantly bemoaning your phone’s lack of stamina, this could be the perfect budget Android smartphone for you.

Chunky, and not the sharpest display

While the $300 Moto G7 strives for a premium feel with a glass back and metallic highlights, the Moto G7 Power economizes with glossy, curved plastic for the back and frame. It’s still clearly part of the same family with that signature round camera module on the back and the M logo marking out the fingerprint sensor beneath.

There’s a 3.5mm audio jack up top, a USB-C port on the bottom edge, and the volume rocker with a power key below on the right spine. It’s good to see budget phones making the shift to USB-C, as it means the charging cable is always the right way up. Many laptops also charge via USB-C, so it also means one less cable to carry around. I also like the way Motorola includes a subtle texture on the power button, making it easy to find without looking.

Glass may be better looking, but plastic is always warm and comfortable in hand, and it’s less slippery. The Moto G7 Power does feel quite chunky and heavy, no doubt because of the big battery it’s packing, but I suspect many people will accept an extra millimeter or so for longer battery life.

The front of the phone is all glass with a big chin at the bottom bearing the Motorola name, with a small notch carved out of the screen at the top.

This phone is all about the battery life.

With a 6.2-inch IPS LCD, Motorola hasn’t compromised on size, but the 1,570 x 720 screen resolution is a disappointment. You can argue that the regular Moto G7 and the recent Sony Xperia 10, which both pack Full HD displays, are more expensive, but the Nokia 6.1 also manages to pack in a 1,080p screen. The difference definitely shows, because the Moto G7 Power only has 279 pixels-per-inch (ppi) compared to 405 ppi for the regular G7 and 403 ppi for the Nokia 6.1. Whether you’re reading or watching a movie, you really want the screen to be as sharp as possible.

If you’re switching from an older phone, the lower resolution is unlikely to bother you, but side-by-side with a Full HD display is another matter.

Thankfully, there are no issues with the screen brightness; it’s easy to read outdoors. And just like the Moto G7, colors are a little over-saturated by default, but you can change that in the display settings if you want a more natural look.

Best performance at this price

With the design and display out of the way, we can dig into what really makes this phone a tempting prospect for budget buyers. There’s a Qualcomm Snapdragon 632 processor in the Moto G7 Power, which is backed up by 3GB of RAM in the U.S. version (4GB in Europe). The U.S. version only has 32GB of storage, but there’s a slot for a MicroSD card if you need more space. The European model gets 64GB.

The Moto G7 Power feels fast and capable. Tapping and swiping around is fluid, and apps and games are fairly quick to load. I played Injustice 2, which was slow to fire up and slightly rough around the edges in terms of graphics quality, but it ran without hitches. A quick blast of Super Mario Run presented no problems at all as well.

Here are some benchmark results:

The Moto G7 Power has exactly the same processor as the more expensive Moto G7 and, as you can see, the performance is comparable. It easily bests competitors like the Nokia 6.1 as well as the Sony Xperia 10 (which costs $100 more).

With the regular Moto G7 I encountered a couple of crashes, but there was no repeat of that with the Moto G7 Power. Unfortunately, it did persistently drop my Wi-Fi connection for no apparent reason. It would reconnect when prompted, but I couldn’t see any reason for these outages in the settings. I encountered the same issue with the Moto G7, but not with any of the other phones I’ve used recently, so there is some kind of issue here. I’ve reached out to Motorola for comment and will update here if I hear back.

Some software extras, but update speed is a concern

With Android 9.0 Pie and Motorola’s relatively light user interface on top, the software experience on the Moto G7 Power is good.

The Moto app gives you the choice of lots of different gesture shortcuts, such as chop twice to turn on the flashlight, or flip the phone over to silence it. There are also display options to enable you to interact with notifications on the lock screen or keep the screen on while you’re looking at it. Sadly, the hands-free Moto Voice service isn’t available on the Moto G7 Power.

It’s very unlikely the Moto G7 Power will get more than one version update.

While there’s nothing wrong with the extras and they may add value for some people, I would still prefer to see Motorola taking a page from Nokia’s book by adopting the Android One program. Not only is stock Android slicker, especially when the hardware is not as powerful, but it guarantees two Android version updates and three years of security updates. Android 9.0 Pie only recently started rolling out to last year’s Moto G6 and that phone is unlikely to ever see Android Q. It’s very unlikely the Moto G7 Power will get more than one version update (so that’s it after Android Q).

Camera has highs and lows

The main camera in the Moto G7 Power is a single-lens affair rated at 12 megapixels. It has an f/2.0 aperture and support for HDR. That’s a big step down from the dual-lens Moto G7, which pairs a 12-megapixel lens with an f/1.8 aperture and a 5-megapixel lens for depth sensing. The lower the f number, the wider the aperture, which means it can let in more light. The dual lens allows for a much better bokeh effect, where your subject is sharply defined, and the background is blurred.

The Moto G7 Power camera performs admirably in good conditions and I was pleased with the daytime landscape shots it took. It captures plenty of detail and the colors look good. It also handles close-ups quite well, provided there’s enough light.

I took the same coastline shot with the Moto G7 and the G7 Power and I actually prefer the slightly more vibrant colors of the G7 Power photo on the right.

Budget phone cameras struggle with low light and the G7 Power is no exception. I wasn’t impressed with the low light performance in the Moto G7 but, sadly, the Moto G7 Power is even worse. There are other areas where the more expensive Moto G7 makes its superiority felt. The lack of that second lens for depth sensing becomes even more apparent when you shoot portrait shots.

The G7 Power’s camera struggles with hair and seems uncertain on what areas it should blur. You can also see how poorly it struggles with a darker indoor environment in the last portrait shot. I prefer the photos of people it takes with portrait mode turned off.

Spend a little more and you can definitely secure a better camera. You could argue that the camera in the Moto G7 Power is good for the money, but the Nokia 6.1 has a decent 16-megapixel camera, though it’s unsurprisingly even worse in low light.

As the name hints, the Moto G7 Power is a smartphone with plenty of stamina thanks to a large 5,000mAh battery. In our battery test, streaming a video from YouTube with maximum brightness on Wi-Fi, the Moto G7 Power lasted an impressive 13 hours and 59 minutes. That’s the best result we’ve seen so far, though it’s important to note that the maximum 720p resolution helps here, because we usually run the test at Full HD 1080p resolution.

The Moto G7 Power clearly blows away the competition on battery life. The only phone we’ve tested that has come to close to this result is the Samsung Galaxy S10 Plus, which managed 12 hours and 40 minutes. That phone costs $1,000.

This is a really dependable workhorse of a phone.

When I plugged in the USB-C cable to charge, Motorola’s TurboPower, which charges at 15W, took the Moto G7 Power’s battery from zero to 58 percent in an hour. Considering the capacity, that’s nice and snappy for a budget phone.

The Moto G7 Power easily lasted two days between charges, but you could stretch that out longer with lighter use. If better battery life is what you seek, you’ll find it here.

The Moto G7 Power costs $250 and is available now from retailers like Best Buy, B&H Photo, and Amazon. You can also buy it directly from Motorola.

It comes with a standard one-year limited warranty for manufacturing defects and faults.

As the middle child of the G7 family the G7 Power lacks the glitz and bluster of the more expensive Moto G7 and it costs $50 more than the smaller Moto G7 Play, but it definitely has its charms. This is a really dependable workhorse of a phone that offers unrivaled battery life and solid performance.

The Moto G7 matches the G7 Power in every way except battery life and bests it in a few areas. It has a better camera, particularly for portrait shots, a sharper display, and a more premium design. But it also costs $50 more.

If $250 is all you’ve got, then you might look at the Nokia 6.1. It has a sharper screen, it’s an Android One phone, and the camera is slightly better in well lit conditions, though it’s worse in low light. The Nokia 6.1 also struggles to match the Moto G7 Power on performance, and battery life doesn’t even come close.

Snag a case and the Moto G7 Power should last you a couple of years. The problem is that it will probably only get software updates for around a year or so, and you could be waiting a long time to get Android Q.

If battery life is your biggest bugbear and your budget is limited, then you should buy the Moto G7 Power. You won’t find a more powerful phone in terms of stamina and performance at this price.