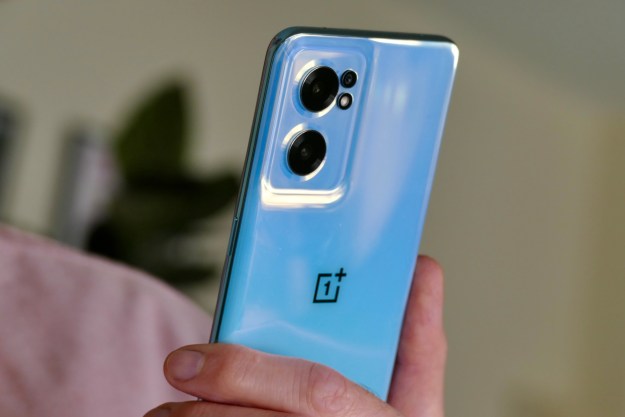 “The OnePlus Nord CE 2 5G's outstanding design houses a dependable smartphone with excellent battery life and fast charging -- and it all comes at a reasonable price.”

According to OnePlus, the original Nord CE, one of its cheapest smartphones, sold mostly to people who had never owned a OnePlus phone before. It was the company’s gateway drug so to speak, showing new owners what OnePlus was all about, and therefore tempting them to eventually enjoy the wonders of the OnePlus 9 Pro or the OnePlus 10 Pro.

For this reason, OnePlus could be forgiven for not changing much about the phone for the sequel. However, OnePlus may have to wait a while before any upgrades happen because the OnePlus Nord CE 2 5G is so solid that it may end up being all the phone those OnePlus first-timers need for a few years yet.

The OnePlus Nord CE 2 5G is a very, very pretty smartphone. The color you see in our photos is called Bahama Blue, and it’s really fantastic. Looked at straight-on, it’s a rich blue, but from an angle in certain lights, it takes on an oyster shell-like tone, revealing purple, silvery, and even pink hues. It’s lovely.

Taking inspiration from the Oppo Find X3 Pro’s camera module is a masterstroke. The rear panel curves around the camera lenses, making the enclosure part of the phone rather than a separate module. It not only looks great, but it feels good when you run your finger over it, too, as there are no sharp edges at all.

It’s very light by modern phone standards at 173 grams, and the modest 73mm width and 7.8mm thickness makes it pleasing and comfortable to hold in one hand. There’s no fatigue, it’s balanced well so you can use it comfortably laying in bed, and it disappears in your pocket.

However, the phone is made entirely of plastic, and there’s no Alert Slider control either, which is something of a OnePlus trademark that’s sorely missed here. The plastic build and lack of Alert Slider were downsides of the first Nord CE, so it’s not a surprise to see the same on the sequel. On the plus side, the plastic rear panel is smooth, warm, and tactile. The bottom of the phone also features a surprise inclusion in the form of a 3.5mm headphone jack.

Low-cost smartphones sometimes suffer from a lack of identity, but the OnePlus Nord CE 2 5G’s great looks aren’t boring at all.

OnePlus has used the same camera as the original Nord CE for the Nord CE 2 5G, and it relies on software updates and enhancements from the MediaTek processor to improve the phone’s photographic ability. This means you get a 64-megapixel main camera with an f/1.7 aperture and electronic image stabilization (EIS), plus an 8MP wide-angle camera with a 119-degree field of view and a 2MP macro camera. The selfie camera sits at 16MP.

The camera app is identical to the one installed on Realme and Oppo phones. It includes a might mode, a macro mode, a full-resolution 64MP mode, and the ability to shoot 4K video at 30 frames per second (fps). There’s an A.I. Mode that adds scene recognition and gives the images a visual boost, but it’s less effective here than it is on the Realme 9 Pro+, a phone that rivals the Nord CE 2. It’s a shame, as the Nord CE 2’s photos aren’t exactly brimming with life, and do lack some vibrance and excitement. The electronic image stabilization (EIS) in video isn’t great either, and can’t eliminate movement even when only walking.

The selfie camera is good, though, and it’s certainly feature-packed. There are plenty of live filters to try, and the beauty mode is comprehensive. It’s not active by default, though, so all the changes are down to your own choice. The portrait mode works well, blurring the background despite being software-driven. Similarly, the editing suite has all the features you want to enhance and alter your photos. The wide-angle camera produces very different, overly saturated photos compared to the main camera.

While the Nord CE 2 5G isn’t designed to compete with OnePlus’ Hasselblad-equipped cameras, it’s perfectly adequate for general photography, is actually very good for selfies, and has the right amount of features to keep you happy, provided you’re not expecting it to challenge flagship phones.

OnePlus has put a 6.43-inch AMOLED screen with a 90Hz refresh rate on the front of the Nord CE 2 5G, with Gorilla Glass 5 over the top, and this time it has HDR10+ certification that wasn’t provided on the Nord CE. It’s otherwise almost identical in specification to the Nord CE, which disappointed due to a lack of vibrancy and warmth. I’m pleased to say performance has been significantly improved here, with colors popping off the screen.

You do have to whack the brightness up to see all the benefits, though, and I’ve kept the display in its Vivid color mode and the color temperature in the default setting. Watching Woyshnis Media’s film of a Ferrari 458 Italia in Seattle shows off the vibrancy of the screen, and its ability to reveal detail in dark areas. At the same time, the video also highlights the disappointing lack of bass and depth from the single speaker, which does let down the Nord CE 2 5G’s media ability.

OnePlus has chosen the MediaTek Dimensity 900 processor for the phone, pairing it with 8GB of RAM and 128GB storage space. It’s somewhat surprising that OnePlus hasn’t selected the newer Dimensity 920 processor, which competitor Realme has done for the Realme 9 Pro+, but it actually seems to perform a little better when playing games. Activate the phone’s Game Pro mode, and Asphalt 9: Legends is smooth and fast, with no hesitation or pauses between screen changes.

Unfortunately, it’s Android 11 with OxygenOS 11 installed on the phone at launch, putting it behind many competing phones that have already seen an update to Android 12. However, the software doesn’t disappoint with performance and is snappy throughout, with smooth screen changes and animations, a cute “bounce” when you scroll to the end of a menu, and no delay when changing settings. This all makes the phone very easy to live with on a daily basis.

The in-display fingerprint sensor and face recognition security systems are reliable and very quick, I like the choice of ambient display options for when the phone is locked, there’s Wi-Fi 6 and 5G to keep the connectivity up to date, and you have the option of adding a 1TB MicroSD card to the SIM tray alongside two SIMs. You’re certainly not lacking in connectivity and expansion features here.

The OnePlus Nord CE 2 5G has been a solid, easy-to-live-with partner over the past few days. It’s peppy enough that it never frustrates and has enough power to play complex games, all without the impact on price that a “flagship” processor would bring. I’d rather the phone launched with the latest version of Android installed. though.

The 4,500mAh capacity battery lasts for two days of hard use before it needs recharging. If you don’t play games and turn the phone off overnight, it’ll last three days, which is really excellent. When it does need to visit the charger, it’ll only need to be plugged in for a very short amount of time thanks to the 65-watt SuperVOOC fast charging system. The adapter and cable come in the box, and in my tests took the battery from under 5% to 100% in just under 35 minutes.

It’s incredibly convenient and removes almost all battery anxiety, which, along with the long use time between charges, makes the Nord CE 2 5G a very dependable phone. I could easily take it with me on a weekend getaway and not charge it at all, or forget to charge it overnight and simply top it up in the morning. It takes 15 minutes to reach 65% capacity, which is more than enough for a day’s use.

The OnePlus Nord CE 2 5G will be released on March 10, with pre-orders available from March 3. It costs 299 British pounds, or around $405. As OnePlus didn’t release the first Nord CE in the U.S., it’s unlikely to bring the sequel there either. You could import one, though.

OnePlus has gone out of its way to make the Nord CE 2 5G a real bargain by updating some of the components and giving it a flashy new design while keeping the price the same as before. Even where the hardware hasn’t really changed over the first Nord CE — the screen and camera, for example — these features have been refined to provide a better experience.

The downsides of the phone — no IP rating, an older version of Android, and a basic single speaker — are by-products of the price, and aren’t deal breakers when the rest of the phone performs so well. The newly added superfast battery charging will be a more useful feature for many people anyway, and I’m also pleased to see the phone has a stylish, eye-catching design that gives the Nord range character — something that’s been lacking in other Nord models. The OnePlus Nord CE 2 5G is an excellent value smartphone that doesn’t suffer from the crime of being boring.

The OnePlus Nord CE 2 5G is a very good buy, but what about something else? In the U.S., the Google Pixel 5a 5G costs $449 and is a strong alternative to the OnePlus Nord CE 2 . The Samsung Galaxy A52 5G is aging but is still a strong phone, and if you can find it for around $400, it’s great value too.

In the U.K., Realme’s new Realme 9 Pro+ costs 349 British pounds and directly competes with the Nord CE 2 5G, as does the Realme GT Master Edition. The Google Pixel 4a is still a great smartphone for camera fans, and you do get long software support, but the hardware is getting old.

There’s no IP rating, but OnePlus does say the phone is splash-proof, so it’ll be fine for use in the rain, but not if it takes a dip in the bath. A total of two years of Android software updates are promised, along with three years of security updates, which means the Nord CE 2 will be good for at least two years provided your own usage needs don’t change.

Yes. The OnePlus Nord CE 2 5G improves on the last model, and has all the performance and functionality you want from a phone at this price.