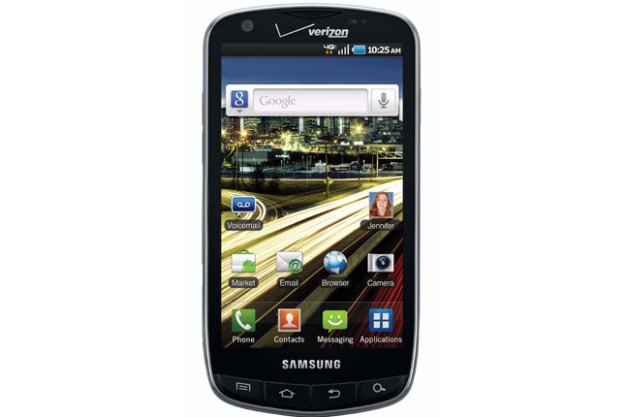 “The Samsung Droid Charge is expensive, but it is also a solid device that you probably won't regret choosing once you leave the store.”

The Droid Charge is the second 4G LTE phone to launch on Verizon Wireless here in the States. That puts Samsung into direct combat with HTC’s ThunderBolt, which has seen strong sales since its debut in March. But at $299.99, $50 more than other 4G phones, is the Droid Charge worth the premium?

Samsung has taken a few risks with the design of the Droid Charge. While it is essentially a big square touchscreen like most smartphones these days, the Charge stands out from the crowd in a few ways. The bottom of the phone contains the four standard Android buttons: menu, home, back, and search. However, unlike most devices, which rely on touch buttons with haptic feedback, these are actual buttons. At first they appear to be a bit cheap and dimly lit, but we grew to enjoy pressing physical buttons for a change. The power button on the top right of the phone is also remarkably easy to press when you need to unlock or lock the screen.

The four navigation buttons also shape the phone’s other defining characteristic: its pointed chin and bulbous behind. If that sounds odd, it’s only because we can’t find a better way to describe it. The bottom of the unit has a chin of sorts, meeting at mild point. Behind the chin is likely the 4G LTE antenna, which causes the Charge to bulge out a bit. At its thickest, the phone is still slightly thinner than the original Motorola Droid, though it has no keyboard as an excuse for its heft — only the demands of Verizon’s 4G network.

We’re very impressed by the 4.3-inch phone’s Super AMOLED Plus screen, and its 480 x 800 resolution. As promised, the screen delivers on vibrant color and clarity, and doesn’t appear stretched and pixelated like Samsung’s 4.5-inch Infuse 4G. It holds up decently in outdoor conditions, though we still had difficulty reading the screen on particularly sunny days.

Though we hate to harp on it, the Droid Charge has that same cheap, plastic shell that seems to be on every premium Samsung device. It’s a bit disheartening to buy a $299.99 phone and have it feel like a flip phone. Luckily, in the case of the Charge, Samsung has an actual reason to use plastic: It’s light. Even with the plastic shell, the Charge is no lightweight, so opting for sturdier materials might have been a mistake.

All the usuals are in place as well: Two cameras, a headphone jack, a micro HDMI and USB jacks, a microSD slot, and, yes, a Verizon SIM card slot are all included as well. Yep, with 4G, Verizon will begin supporting SIM cards, taking the hassle out of switching phones.

The Droid Charge is a mixed bag when it comes to stats. Unlike some top of the line Android phones, this is not a dual-core device. Like the ThunderBolt before it, the Charge runs on a single-core processor, this time a 1GHz Cortex A8 Hummingbird (ThunderBolt runs on a 1GHz Snapdragon processor). The scant 512MB of RAM can be felt as well, with applications and animations hiccupping ever so slightly here and there.

One last thing: Like most new Android devices, the Droid Charge is still running Android 2.2. While this isn’t a terrible OS, Android 2.3 has been out for several months now. We’re hoping Samsung upgrades the device quickly. Representatives have said that an upgrade is on the way in the coming months. It can’t come soon enough.

Samsung’s TouchWiz 3.0 UI mimics the iPhone too much, and it’s not as beginner-friendly as HTC Sense, but it has some good features. In particular, we like the built in toggles for Wi-Fi, Bluetooth, GPS, mute, and screen rotation into the pull-down notifications bar. Another new feature lets you pinch to see all seven home screens at once (a nod to Sense).

The Droid Charge also has a custom unlock screen that has proven very useful. To unlock the phone, you drag a jigsaw puzzle piece over to a corresponding hole. The same process is used to answer a call. However, if you happen to get a text, a special text message puzzle piece will pop up, allowing you to instantly go to your texts. We wish this feature was expanded for missed calls and emails.

The preinstalled widgets on the Droid Charge are also a step up from those on the Infuse 4G and other Samsung phones. Though you can still use the silly dual-clock (who needs two clocks stacked on top of one another?), a nice big weather clock is also available. In addition, four thin, semitransparent widgets are now available as well: one for the weather, one for stocks, one for news, and another for your calendar. The full-screen “feeds and updates” and buddy widgets also make a return. While we’d like to see Samsung work on the thematic consistency of its widgets and TouchWiz UI, everything seems to work well enough.

We really like browsing the Web on Verizon’s 4G LTE network. Using the Speedtest.net app in New York City, we have been getting between 14 and 20 Megabits per second download speeds and 3.5 to 4.5 Mbps upload speeds. These are very, very fast speeds that rival what you probably get on a landline connection. In fact, while on a call, we maintained a 14 Mbps down and 3.4 Mbps up connection. Yep, AT&T won’t be able to run those fancy ads with Luke Wilson any more. Verizon’s 4G network lets you surf and talk at the same time. Expectedly, we lost connection while in the subway, but the Charge maintained a connection well while indoors and throughout Manhattan.

We also downloaded several music albums at speeds that rivaled a desktop. A 12-song MP3 album only took about 30 seconds and we were able to download 50MB podcasts before we really had time to read their paragraph long description. Setting up a mobile hotspot was also easy and worked very well, though it drained the battery something quick. There’s something to this LTE thing.

Wisely, Verizon has included a Data Usage widget with the Droid Charge, along with a lot of other Samsung and Verizon bloatware, which you cannot remove from the phone. It’s nothing that will ruin your day, but there’s really no reason why Rhapsody, V Cast Media, VZ Navigator, Slacker Radio, TuneWiki, ThinkFree Office, Rock Band, Blockbuster Video, AllShare, Verizon Apps, Amazon Kindle, Bitbop, CityID, Let’s Golf 2, Media Hub, and Weatherbug have been deemed so vital to the phone that they cannot be uninstalled. By all means, put some useful apps on the phone, Samsung, but don’t clog up the device by making them unremovable. Sadly, Samsung is not at all alone in this practice. Most manufacturers seem to be doing it.

The Droid Charge comes loaded with an 8-megapixel rear camera and 1.3-megapixel front camera. Like the camera on the Infuse 4G, both compare well to what’s out there. We like Samsung’s camera software, which lets you tap on the screen to choose an item to focus on. It also has a few fun modes for action shots, panoramas, smile shots, etc. Also like the Infuse, the still camera also did fairly well in low-light conditions thanks to the bright LED flash. We also got decent audio and motion from the video camera, which can record at up to 720p.

Like the Infuse, the Droid Charge has a poorly placed rear speaker. If you happen to set your phone on couch or pillow, the sound will be almost completely muffled. However, with a good pair of headphones, the sound from the Charge is fairly impressive. Supposedly, the device can also output 5.1 surround sound, though we weren’t able to get this feature running. This would be a nice bonus, if available.

The only downside to the blazing speeds of 4G Internet service are how poor standard phone calls still sound. However, as tinny and low-quality as real phone calls are, Samsung’s Droid Charge handles them well. We didn’t have a single lost call during our testing, and the speaker phone works fairly well. Another nice feature of TouchWiz is visible if you minimize the call screen during a phone call. By dragging down the notifications bar, you can see a few buttons for your active call, which let you quickly mute, turn on the speaker, or end the call.

We’ve compared the Droid Charge to the HTC ThunderBolt, and for the most part, both are fairly evenly matched…until you get to battery life. Samsung’s phone has a 1800mAh battery, which is much larger than the 1400mAh battery in the ThunderBolt. The upgrade is needed as Verizon’s network is battery hungry. Still, thanks to the larger battery, few users should have a problem maintaining a charge throughout the day, or perhaps longer. We can’t emphasize enough how negatively a dead battery can affect your day.

There are some drawbacks to the Droid Charge, but for those comparing it to Verizon’s other 4G phone, the HTC ThunderBolt, none of the downsides compare to its strong battery life. We wish it had a metal shell, dual-core processor, and more RAM, but where Samsung shines, it shines bright. Its Super AMOLED Plus screen is quite impressive and visible outdoors, and it has a particularly nice camera and audio. Even at $50 more than the HTC ThunderBolt, it might be worth it if you aren’t able to plug in your phone throughout the day. Comparisons aside, the Droid Charge is expensive, but it is also a solid device that you probably won’t regret choosing once you leave the store.