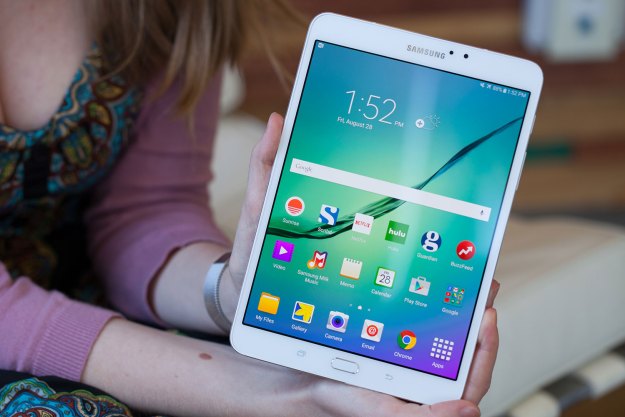 “Samsung’s Galaxy Tab S2 is the best Android tablet you can buy.”

Most Android tablets play second fiddle to the iPad. They’re often cheaper, weaker, and less attractive that Apple’s famous tablet, but occasionally, one comes along that actually challenges Apple. Samsung’s Galaxy Tab S line started in 2014 with one purpose: to offer Android users a high-end tablet that doesn’t run iOS.

This year’s follow up to the gorgeous Tab S, the Tab S2, is just as powerful, slender, and appealing as the original, but without that weird Band-Aid texture on the back. It’s also thinner, lighter, and cheaper than the iPad Air 2, though it does have some competition from the all-metal Dell Venue 8 7000.

When you first pick up the Galaxy Tab S2, its weight will surprise you. It’s so light that it’s almost like holding a thin plastic cutting board in your hands. At 5.6mm thick, both the 9.7-inch and 8-inch slates are thinner than the iPad Air 2, and they weigh significantly less, too. The 9.7-inch Tab S2 weighs a mere 0.86lbs, while the 8-incher comes in at 0.58lbs. For comparison, the iPad Air 2 weighs 0.96lbs, which is already really light for a 10-inch tablet in a metal casing.

Samsung’s tablets are real featherweights, and if you equate ‘premium’ with heft, then you’ll be disappointed. Even the bigger 9.7-inch tablet is incredibly lightweight, and it would be effortless to hold with one hand on the train, or propped up in bed. Of course, the incredible lightness of the Tab S2 comes at a price: Both models are made out of plastic, not metal, like Dell’s premium Venue 8 7000 or Apple’s iPad Air 2.

Given the high quality of the tablet overall and its premium price tag of $350 and $400, it’s surprising that the Tab S2 isn’t made of metal. Dell’s Venue 8 costs $350, but its all-metal construction adds style and durability to the tablet. Instead, Samsung opted for simple matte plastic. Luckily, it feels sturdy and smooth to the touch. There’s no flex to the Tab S2, which is a problem plastic Android tablets often have. It’s a very sturdy tablet, and the chamfered metal edges add flair to the otherwise minimalist design. Unless you’re hell bent on having a metal tablet, you won’t be disappointed by the look or feel of Samsung’s slate.

Both sizes are very comfortable to hold, due in part to the iPad-like 4:3 aspect ratio and the curved corners, which don’t taper off into a sharp edge. This is important for such a big device, particularly if you read while supporting the tablet in your palm or rest it on your chest. The Tab S2 won’t dig into your skin uncomfortably. The lightness is a little disconcerting, though, and it almost feels delicate, something that’s accentuated by the incredible thinness.

Samsung offers three colors: the standard black and white, as well as gold. The gold color is gorgeous. It’s like the S6 Edge Plus’s gold hue — subtle, and not too bright. It’s more visually exciting than the white version, and certainly the one to choose.

The Tab S2 has two speakers, a Micro USB port, and a headphone jack on the bottom of the device. On the right side, there’s the power button, volume rocker, and the MicroSD card slot. There’s also a fingerprint sensor in the Home button, so you can secure your tablet.

Fingerprint recognition is as easy to set up on the Tab S2 as it is on the Galaxy S6. You simply press the sensor repeatedly until it has a good grasp on what your fingerprint looks like. From then on, it’s lightning fast to unlock your tablet with the touch of a finger. Other than the iPad, Samsung’s Tab S2 is one of the only tablets with this extra bit of security. Although some may question how important it is to secure your tablet with a fingerprint, it’s a nice feature for those who travel or share a space with others (including kids) to whom you may not want to give full access to your tablet.

Samsung’s Galaxy Tab S2 is as close as you can get to owning an iPad that runs Android. The 8 and 9.7-inch models both sport a stunning 2,048 x 1,536 pixel resolution, and the screens are Super AMOLED, so the darkest blacks are deep and rich. Images are beautiful, and you’ll want to watch movies on the 9.7-inch model all day. The 8-inch Tab S2 shines most when you read magazines or view other visually rich content online. It’s the more portable of the two, but we prefer the larger screen for viewing video. Since both are so light, the 9.7-inch version is easy to take with you anyway, so if you want a tablet for watching movies on the go, it’s your best bet, and probably the best all around. Regardless of your size preference, the Tab S2 looks just as sharp and vibrant as the iPad Air 2.

Samsung’s Galaxy Tab S2 is as close as you can get to owning an iPad that runs Android.

Both tablets are powered by an octa-core Exynos processor, which combines a 1.9GHz quad-core chip and a second, 1.3GHz quad-core chip. Samsung packed 3GB of RAM inside and offers versions with LTE or Wi-Fi-only.

Plus, there’s 32GB of internal storage space, and a MicroSD card slot for adding another 128GB. The ability to expand storage is a key benefit, especially for those who want to download tons of movies, photos, and apps on their tablets. iPad users don’t have that option, and often end up either running out of space very quickly or paying more for the models with extra storage.

The Tab S2 line runs Android 5.1 covered with Samsung’s TouchWiz user interface, which is much less obtrusive than it used to be. It’s fast and responsive with no lag time at all. It may not be pure Android, but unless you’re a real purist, you won’t be bothered by Samsung’s overlay. Some of the additions are even welcome, such as Microsoft’s OneDrive and Office app suites. Flipboard is also just a swipe away from the home screen, and it makes for great reading – especially on the 8-inch Tab S2. Other apps are annoying, like the Galaxy Gifts, Milk Music, and Galaxy Essentials widgets, which sit on one of the home screens. Luckily, they’re removable.

TouchWiz also brings a pair of navigational tricks to the Tab S2 line, including multi-tasking and pop-out apps. To access multi-tasking, simply long press on the recent apps button to see other apps that you can use with the one you’re currently viewing. It’s a nifty feature that makes it easier to do two things at once on a tablet. Although it looks best on the 9.7-inch versions’ larger screen, the 8-incher can handle it, too. The option to pop out apps and view them in a window is less useful. Shrinking one app to view another at the same time seems awkward.

Tablets should never be your first choice when it comes to taking photos, and we highly recommend that you never take pictures with one, but if you find the Galaxy Tab S2 is the closest device at hand when a photo op presents itself, you’ll probably like the results. The 8-megapixel sensor may not match the S6, but it does have a fast f/1.9 aperture, autofocus, and the ability to shoot 1440p video. That’s impressive enough for a phone, let alone a tablet. Our limited testing with the tablet’s camera returned acceptable photos, but you should really stick with your phone based on size alone.

Battery life is normal for a tablet

Even though the Galaxy Tab S2 is super thin, Samsung managed to get a decent-sized battery inside both models. The bigger 9.7-inch Tab S2 has a 5,870mAh cell, while the 8-inch version has a 4,000mAh battery. Battery life was good, but not outstanding on either the 8- or 9.7-inch version. Depending on how much you use your tablet, and if you’re watching videos, it could last you 8 to 10 hours. Most tablets come in around this number, anyway, so it’s hardly surprising. Light tablet users can expect to charge up once or twice a week, and those who watch video every day may have to plug it in more often.

Samsung offers a one-year warranty for the Galaxy Tab S2, so if you run into problems in the year after you buy it, Samsung will repair or replace it for you. Of course, some damage isn’t covered, so you won’t want to run it over with your car just for fun. Water damage isn’t covered, either. For full details, you can see Samsung’s website here:

For Android users, Samsung’s high-end tablets have always been the logical alternative to Apple’s iPad. The Tab S line started on a high note, and the second-generation is as excellent as the first. The bright sharp screen, thin and light body, as well as the powerful processor and RAM combination make the Tab S2 the ideal Android tablet. Both the 8 and 9.7-inch models are super lightweight, and although the metal of the iPad and Dell Venue 8 7000 series tablet is undoubtedly more premium and attractive, Samsung’s tablets are more portable.

Fintie Samsung Galaxy Tab S2 9.7 Smart Shell Case ($14)
This thin and light flip cover has an automatic sleep and wake function on the tab S2, and it doesn’t add any bulk to the thin tablet.

Fintie Samsung Galaxy Tab S2 8.4 Smart Shell Case ($10)
This thin and light flip cover has an automatic sleep and wake function on the tab S2, and it doesn’t add any bulk to the thin tablet.

Samsung Evo Plus 128GB MicroSD XC Class 10 Mobile memory card ($63.44)
Want to expand your Tab S2’s memory to the maximum amount? Then you’ll want to pick up one of these 128GB MicroSD cards.

For those who want a powerful tablet with a killer screen that’s extremely portable, the Galaxy Tab S2 is the best option out there. It is, admittedly expensive, though. The official Samsung prices are $400 for the 8-inch model and $500 for the 9.7-inch version. However, you can get them both cheaper on Amazon for $350 and $400, respectively. The Dell Venue 8 700 Series tablet with its all-metal build and 32GB of storage costs $350, too. It has comparable specs, and poses a strong challenge to the Galaxy Tab S2. However, it is heavier, thanks to the aluminum build. You can’t go wrong with either of these Android tablets. The Dell wins on design, but Samsung wins out on portability.

When you compare the Galaxy Tab S2 with the iPad, things get more hairy. The main disadvantages of the iPad Air 2 or the iPad Mini 4 versus the Samsung’s offerings are the higher price tag and the lack of expandable storage. Otherwise, the tablets are more or less equal. Apple has the edge on design with its aluminum finish, but the Tab S2 is lighter and its screen is magnificent. In the end, your choice comes down to operating system preference and how much you’re willing to pay. Those who want an iPad alternative should opt for the 9.7-inch Galaxy Tab S2 – you won’t be disappointed. The 8-inch Tab S2 is perfect for those who prefer smaller tablets that are very easy to grab on the go.