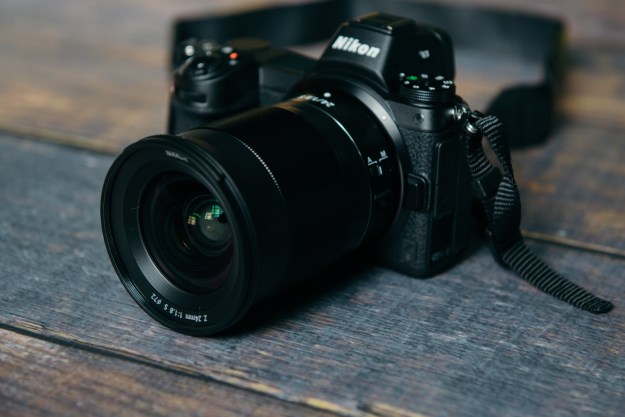 More than one year in, Nikon’s Z mount lens system is steadily growing. The newest member of the family is the Nikkor Z 24mm f/1.8 S, a focal length already covered by two 24-70mm lenses. But where the zooms offer slower f/4 or f/2.8 apertures, this new prime is much brighter. The 24mm is the third and widest prime yet in the Z series, which also includes a 35mm, 50mm, and 85mm all with f/1.8 apertures.

Based on our experience with other lenses in the premium S line, the 24mm f/1.8 S packs few surprises — and that’s a good thing. It proves Nikon’s sharpness claims aren’t just marketing speak. With stunning clarity and minimal distortion, this is another must-have prime for Z-series photographers.

The Z 24mm f/1.8 looks and feels like the other three prime lenses in the young Z series, with a sleek, minimalist design. Unlike Nikon’s DSLR lenses, the Z lens lacks a focus scale. The only controls on the lens are the autofocus switch and programmable focus ring. The ring rotates with buttery smoothness and can be customized to adjust aperture or exposure compensation instead of focus, a nice feature given that most photographers will be shooting with autofocus.

For as minimal as the design is, the construction is the opposite. The lens is weather-sealed and feels as high-end and sturdy as the Z 6 and Z 7 cameras for which it’s built. Gone is the plastic-like feel of some DSLR lenses, replaced instead with a lens that feels much more durable. As with the Z 85mm, don’t think that the f/1.8 aperture means this isn’t a professional-level lens — it absolutely is.

There is a trade-off for that high-end build, however. The lens tips the scale at nearly a pound and takes up 3.8 inches in the camera bag. While the high-end optics inside and the weather-sealing are likely worth that extra weight for most photographers, it is heavier and longer than Nikon’s DSLR variant.

Photographers that head into the Z system expecting both mirrorless bodies and lenses to be smaller than their DSLR counterparts will be disappointed. Nikon can take the mirror out of the body, but there’s little workaround to make high-end optics smaller.

Inside, the Nikkor Z 24mm f/1.8 uses a multi-focus system with two stepper motors. That allows the lens to focus quickly and quietly — not silently, but not as glaringly loud as some lenses. Focusing is possible down to about 0.83 feet in front of the lens.

The autofocus performance with the 24mm was consistent with our experience using the Z 6 with other lenses, including lenses with the FTZ adapter. Autofocus was good in most conditions, but struggled in low light, hunting back and forth and resulting in more soft shots. While autofocus issues could be created by the lens or the camera, we suspect the camera is at fault. As Nikon improves the autofocus systems on subsequent Z-series cameras, the 24mm lens will likely get better.

Recording video, aperture adjustments feel smooth and not jarring, allowing videographers to lighten or darken the image or adjust the depth of field mid-recording. That’s helped in part by the option to adjust aperture with the programmable focus ring, since using the control wheel on the camera body creates an audible click that is recorded by the microphone.

Just like the design, images from the Nikkor Z 24mm f/1.8 bring no surprises. Nikon promised sharper images with Z mount, and that’s what this lens delivers.

Sharpness at the center when shooting wide open is good and better than most. Stepping down to f/2.8 raises the sharpness to excellent, although the difference is negligible in real-world use. This is a lens we felt comfortable shooting wide-open without worrying about sharpness.

The f/1.8 aperture also makes it easy to achieve a shallow depth of field, despite the wide angle. Thanks to that nine-blade aperture, the lens captures circular bokeh with no hard edges.

Chromatic aberration, which often plagues fast wide-angle lenses, was tough to spot. We were zoomed in 300% before we thought that maybe there might be a slight green tint to a high-contrast edge. Flare was also well controlled.

Wide-angle lenses tend to struggle most with vignetting and barrel distortion. The Z 24mm does have some vignetting that’s noticeable when photographing a light-colored scene. Barrel distortion was surprisingly minimal, likely helped by the fact that it’s a prime and not a zoom.

If a camera is only as good as the lens mounted on the front, then the Nikkor Z 24mm f/1.8 makes for an excellent camera. It is impressively sharp, even when shooting wide open, with minimal distortion. If there’s a downside, it’s the size and price. While not too tough to tote around, it is heavier, larger, and more expensive than Nikon’s 24mm f/1.8 DSLR lens. But considering the premium build quality and excellent results, it’s easy to see why.

The Nikon Z series of lenses has few options because of its youth. The only other Z-mount lenses with the 24mm focal length are the 24-70mm lenses, and even the f/2.8 version isn’t as bright. The zoom may be the better choice for photographers that need versatility, but the added brightness of the prime lens is ideal for low light.

Photographers that already own an F-mount 24mm may hesitate before dropping $1,000 on this lens. While pixel peepers will see the difference between the Z lens and the F-mount version, it’s debatable how much difference that sharpness makes in the real-world or when scrolling through Instagram.

Thanks to the build quality and sharpness, the Nikkor Z 24mm should last many years. The weather-sealing will help the lens withstand everyday wear, while the optical quality should keep up as Nikon comes out with higher-resolution sensors in the future.

Yes. This is a well-built lens that delivers exceptional results, though you may not need it if you already own the DSLR version and don’t mind using an adapter.

Topics
Nikon’s latest optics offer features unique to the Z lens line
Fujifilm’s new nifty 50 f/1 lens can autofocus in near darkness
Lens teardown reveals how Canon made an affordable super-telephoto
The Nikon Z 5 doubles down on SD card slots despite its entry-level price
How to remove the background from an image
Instagram boss says to expect even more video content
6 awesome Earth images captured from the ISS in July
This GoPro Hero 10 bundle is $100 off at Best Buy today
The best iPhone tripods for 2022
Watch this Mavic 3 drone soar above the world’s highest mountain
How to watch DJI unveil an all-new drone today
DJI Avata vs. DJI FPV: Which first-person drone is best for you?
Astronaut reveals source of ‘intriguing’ bright light on Earth