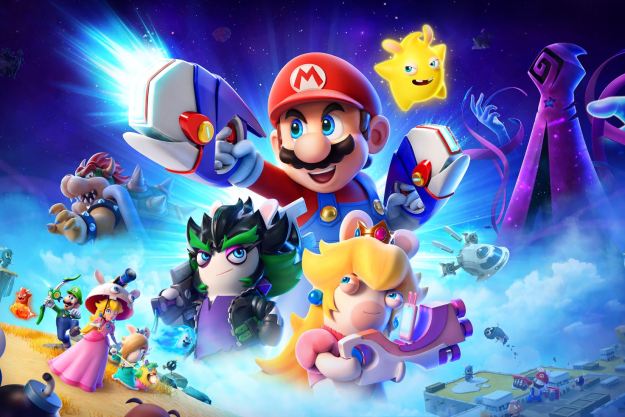 If the Mario franchise has taught us anything over the past three and a half decades, it’s that sometimes change can be for the best. Mario + Rabbids Sparks of Hope is another fine example of that. Rather than rehashing the successful tactics formula that made 2017’s Mario + Rabbids Kingdom Battle a surprise hit, Ubisoft switched the recipe up for its sequel by ditching traditional grid-based battles. Though that decision may have raised eyebrows for anyone who fell in love with the first game, I can’t imagine the series playing any other way now.

Don’t panic: The fundamentals of the two games are still the same. Sparks of Hope is a tactics game where Mario and his friends team up with their Rabbid doppelgangers to take down enemies in turn-based battles. However, the sequel brings a host of important changes that improve on the original’s ideas rather than throw them out the window. Less rigid combat, a greater emphasis on exploration, and a stronger approach to character building all make the sequel feel as fresh as the original did in 2017.

Mario + Rabbids Sparks of Hope shines thanks to its reworked tactics, which make way for some of the best turn economy I’ve seen in the genre to date. Though it doesn’t fix all of its predecessor’s issues, it’s a worthy follow-up that ranks among the Nintendo Switch’s very best exclusives.

Drawing inspiration from Super Mario Galaxy this time around, Mario + Rabbids: Sparks of Hope is a more intergalactic journey. Mario and his pals (both human and Rabbid) team up to stop Cursa, an evil force that’s looking to sow chaos in the galaxy by consuming Sparks, creatures that are a hybrid of Rabbids and Galaxy’s Lumas. The vague, cartoon narrative doesn’t really matter much; it’s just a good excuse to explore five visually creative worlds.

Galaxy may be the primary visual inspiration here, but the world structure reminds me of Super Mario Odyssey more than anything.

Exploration is much more important to Sparks of Hope than it was in Kingdom Battle, and that’s one of its best changes. Though there are primary story missions to complete in each world, they’re largely open-ended with side missions and secrets scattered throughout. Galaxy may be the primary visual inspiration here, but the world structure reminds me of Super Mario Odyssey more than anything. Combining that with Ubisoft’s usual “map game” style of play makes the sequel work even better as a portable game that you can play for five minutes and make some sort of progress.

While the bulk of quests revolve around tactical encounters, there’s much more to do outside of combat. Short coin-collecting challenges, fishing minigames, world riddles, and more help break up the longer battle sequences, bringing more variety and defining the series beyond its core hook. I’m most pleasantly surprised by some of its puzzles, both traditional ones and environmental ones that open up new paths in the world. The game’s best side activity comes in the form of secret doors, which contain a small puzzle room that hearkens back to the diorama-like charm of Captain Toad: Treasure Tracker.

The worlds themselves take a step up visually too, working well with the limitations of the Switch. Kingdom Battle’s levels felt like somewhat basic Mushroom Kingdom fare, moving between archetypical platformer worlds. Environments are more vibrant and densely packed with detail here. The moment I step into the ice-themed Pristine Peaks, I can immediately see a rock cave shaped like a Rabbid head, a rickety wooden path built around a snowy hill, a boat frozen in a lake, and more. By the end of my stay there, I’ll reach all of those areas and even find more hidden around, like a ghostly mansion that serves as its own separate dungeon.

There are discoveries tucked away in every nook and cranny, whether that be well-hidden secrets or some kind of level design sight gag (like a Wiggler trapped in a snow globe). Those changes bring the tactics game more in line with a modern 3D Mario game, making it feel like a more natural marriage of Ubisoft and Nintendo’s design philosophies.

While the exploration is a refreshing change, the excellent tweaks to its tactical battles are really where Sparks of Hope stands out. Rather than sticking to a strict turn-based grid formula, Ubisoft has loosened the rules of battle up a bit to add in some real-time action ideas. Players have two actions on any given turn, which they can use to shoot, use their special ability, or activate a Spark skill. Two actions may not sound like a lot, but Sparks of Hope has a fantastic approach to turn economy that allows players to chain together a lot more moves at once, something that capitalizes on Kingdom Battles excellent Donkey Kong Adventure DLC.

That’s mostly thanks to a big change in how movement works. Not only are players no longer restricted to a grid when traversing a battlefield, but it’s an entirely free action that can be performed in between skill uses and even other heroes’ turns. Jumping off a teammate’s head or dashing into an enemy are also free actions, meaning players can accomplish a lot on a turn without even spending a point. That opens the door for much more creative turns that had me switching between my three characters in between actions to execute complex sequences.

The best laid plans make turns feel like a puzzle game where you need to stretch your actions as far as you can.

On one turn, I can run forward as Peach and then switch over to Rabbid Rosalina and jump off of her to move even further into the battlefield. Then, I can switch to Rabbid Peach who can leapfrog off both of them to reach a spring pad within range of enemies, and switch back to Rabbid Rosalina to springboard even farther. From there, Rosalina can dash into an enemy, inflicting ennui on them to silence them for a turn. The rest of my party focuses on another nearby enemy, spending their dashes and attacks to take them out. With one action left over per character, I can use a toxic shockwave spark to poison nearby enemies and trigger Rosalina’s special ability to silence all enemies within range. The best-laid plans make turns feel like a puzzle game where you need to stretch your actions as far as you can.

There are a lot of key ways that Sparks of Hope keeps that experience feeling fresh battle after battle. For one, each of its nine characters is entirely distinct from one another. Mario wields two mid-range guns which he can fire at two separate targets, while the newly added Bowser can summon an army of mecha-koopas to explode on enemies and inflict fire damage. Different character combinations create entirely new strategies. For instance, anytime I was faced with a mission that required me to simply reach an area, I’d equip my designated movement team: Luigi, Edge, and Rabbid Mario. Building each character’s skill tree around team jumps and movement range, I was often able to complete those missions in one or two turns, sending Luigi safely across an entire map with a careful action order of operations.

The titular Sparks play an especially big role in building characters. By mid-game, players will be able to equip two Sparks on each character, giving them four total actions to choose from on a turn. Sparks have a ton of applications, from augmenting attacks with elements to deflecting damage back onto enemies. That allows for some clever customization potential, even if a character’s weapon stays the same. For instance, I equipped Luigi with a Spark that would turbocharge his damage and another that would turn him invisible for a few turns. That would let him sneak deep into enemy territory and pick off enemies with his overwatch skill without taking a scratch.

All of that doesn’t take away from the franchise’s best trait: It’s still an incredibly approachable tactics game. With added difficulty options that can be turned up or down on any battle, it’s still a great entry into the genre for kids or newcomers. But veterans of games like XCOM can have a field day building a team that’s capable of wiping out half the enemies on screen before taking a single point of damage.

Though Sparks of Hope makes some key improvements, there are still some pain points from the first game that hold true here. For instance, it’s still very hard to read an enemy’s range of movement. You can click on an enemy to see its movement area, as well as weaknesses and resistances, but that all goes out the window when they move through a pipe. I’d often have to restart battles one turn in when enemies on the other side of the screen chained their way to me and killed a teammate almost immediately.

Battles can be incredibly slow too. While there’s a fast-forward button, there’s no way to outright skip enemy turns. Even at a quicker speed, turn animations can take a torturously long time in missions that have a dozen enemies on screen and portals that slowly spawn out two or three more a piece. Some long loads when opening menus can similarly put a dent in the pace. I’d usually only go into character menus when I could upgrade a bunch of heroes and Sparks at once, rather than making micro-changes on the fly.

Those issues make for some frustrations throughout, but they don’t take away from what’s an overall stronger installment of the young franchise. It makes for a standout 30-hour adventure that’s fun from end to end. And while it doesn’t have post-game content, its worlds are loaded with some genuinely challenging missions that’ll test your ability to keep a busy battlefield under control (plus, several DLCs are planned, including a Rayman expansion). One “epic” boss fight against a massive Goomba on a small stretch of land had me thinking about every little movement so I could keep safely kiting my team around it while conserving as much of the map’s limited cover as possible.

Mario + Rabbids Sparks of Hope isn’t just another Nintendo Switch hit; it establishes the tactics franchise as one of Mario’s finest spinoffs. Like a tactician planning out the perfect turn, Ubisoft has made all the right moves to maximize Kingdom Battle’s strengths, positioning the series as one of the best tools in the publisher’s current arsenal.

Mario + Rabbids Sparks of Hope was reviewed on a Nintendo Switch OLED in handheld mode and on a TCL 6-Series R635 when docked.