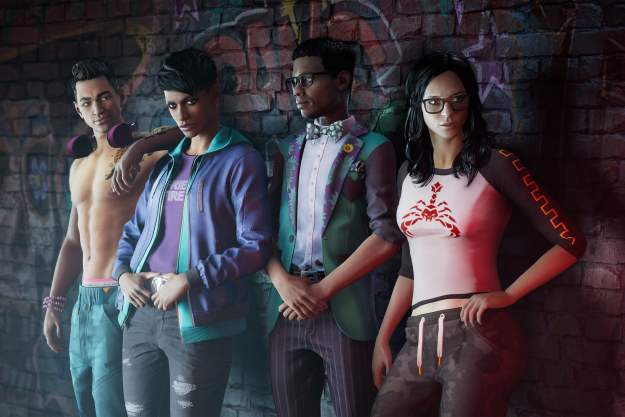 “Saints Row is a perfectly fine open-world game. Just don't expect any surprises, as the reboot lacks much character.”

Where do you take a series once it jumps the shark repeatedly? This is a question the creators of TV shows like Happy Days, The Simpsons, and The Office have asked themselves after years of constant escalation and is a question game developer Volition dealt with while crafting the new Saints Row. The Saints Row series became increasingly ridiculous over time until Saints Row IV capped things off with the addition of superpowers and a DLC set in Hell. While Volition needed to find a way to top itself once again with a reboot featuring a new story, cast, and city, it didn’t. Instead, it settled for making Saints Row perfectly adequate.

Despite innovating in small ways, Saints Row is a safe open-world game. While that’s perfectly fine for those looking for another sandbox adventure to sink time into, its quaintness feels antithetical to the series’ wacky reputation. Saints Row is known for being loud, bombastic, and unconventional. So why am I mostly stuck doing tedious action and open-world checklist objectives? Volition wanted to get in touch with the series’ roots, but after you’ve jumped the shark so many times and the industry has moved on, this reserved approach makes Saints Row feel like an antiquity.

Stuck in the past

Since the series began, Saints Row games have been crime-focused open-world action games with a comedic edge. Players customize their own character and explore a large city as they drive around and get in gunfights with enemies across bombastic set piece after bombastic set piece. Saints Row is no different. Linear story missions see players forming the Saints and leaving their mark by asserting dominance over all of the other factions in Santo Ileso.

Between missions, players can explore the open world, completing Side Hustles for cash, establishing Criminal Ventures to expand the Saints’ criminal empire, and causing some mayhem for civilians in between. While Santo Ileso is expansive and colorful, it doesn’t feel very lively, with the most interesting interaction always happening in predetermined side missions or objectives that will mark off a bullet point on your objective checklist. It’s a formula you’ve seen before, and Saints Row executes it seamlessly and provides the kind of sandbox fun this genre of game is known for.

If that description sounds flavorless, that’s because it is. While Saints Row isn’t a poorly made or super-glitchy open-world game, it also doesn’t do anything that special. Although that means fans can have a good time living out their criminal dreams, it makes the experience feel like an underwhelming one next to the wacky lineage of its predecessors.

The Saints Row series stands out because it was often willing to be even more irreverent than Grand Theft Auto. The third game starts with a beloved character being killed before a freefall into Steelport as Kanye West blares in the background. Meanwhile, the fourth game sees players become the president before they are trapped in an alien simulation and must stop them with superpowers.

Once you’ve played Saints Row for an hour or two, nothing the game does will surprise you again.

In rebooting the series, Volition reeled that “ridiculousness” factor in. Saints Row is a more grounded experience following four friends as they create the Saints gang from scratch in Santo Ileso, a new city based on Las Vegas. It’s supposed to feel like a fresh start for the series, but winds up being a cookie-cutter open-world romp that fails to live up to its predecessors even though it rarely does anything outright bad.

Adventuring around Saints Row’s open-world feels straight out of the early 2010s as players have a list of scattered side objectives to complete between mainline, linear story missions. This formula worked for the old Saints Row games and results in this new game being a passable adventure for those looking for a generic open-world experience. It just never engaged me on a deeper level because of its dated feel and lack of variety. It falls back on generic shootouts and antiquated and frustrating set pieces like turret sections, instant-fail stealth, and escort missions.

Even compared to the likes of Grand Theft Auto V, Saints Row quickly gets repetitive. Almost every Mission, Side Hustle, or Criminal Venture boils down to either driving a vehicle from point A to point B, mowing down hordes of enemies with guns and special perks gained by leveling up, or a mixture of the two. Once you’ve played Saints Row for an hour or two, nothing the game does will surprise you again. The only time gameplay really changes up is with the Insurance Fraud minigame where players toss themselves in front of cars for money, but even that isn’t an original idea.

Since Saints Row IV released, games like The Legend of Zelda: Breath of the Wild, Sable, and Elden Ring redefined what open-world games could be. They have expansive worlds that constantly surprise the player and encourage them to explore and connect with the experience. Saints Row doesn’t take notes from those games or even get as odd as Saints Row: The Third and Saints Row IV did, so getting through the game is a fairly clinical experience even if you’ll never outright hate playing it.

The developers even seem self-aware on this issue. One mission follows the Saints as they try different team-building activities, but each activity keeps devolving into a shootout. It’s played for satirical laughs, but its emblematic of the game’s very real lack of objective variety. Crafting that mission should’ve been a red flag that the game needed to get more creative, but instead serves as an in-game condemnation of Saints Row‘s dated structure.

One place where Saints Row does stand out is in its vehicle and character customization, which you can already check out in the free-to-download Boss Factory. There are many unique options to craft your playable character, whether it be with body shapes, clothes they wear, or textures. Players can also design themselves asymmetrically, cementing themselves as a genre leader in this area.

The character customization is also where Saints Row gets the zaniest. Some of my favorite moments playing the game were when I discovered I could play as characters like Squidward, Shaggy, The Rock, and The Joker and then spent some time causing mayhem around Santo Ileso as them. If Volition had provided players more tools to create wacky scenarios while actually playing the game, then Saints Row might have been an exponentially better experience.

Instead, players must experience the linear narrative Saints Row follows. This is a complete reboot of the series, featuring a cast of brand-new characters who are all struggling millennials that form the gang after getting kicked out of the organizations that run Santo Ileso. Outside of the player character, who’s as trigger-happy and quippy as ever, the Saints Crew consists of the investment-minded Eli, car mechanic and driver Neenah, and the well-connected and eternally shirtless Kevin.

“Saints Row is not an ambitious game in any way.”

Neenah and Kevin are the particular standouts of this new group as they have the most interesting backstories and loyalty missions. Over time, I came to like this new group of Saints, even if their character designs are more muted. None of them feel quite as iconic as Johnny Gat, Shaundi, or Kinze Kensington yet, but it’s worth remembering that those characters didn’t become iconic overnight. Fans had time to fall in love with them over time; hopefully, this new cast will get the same opportunity. I’d also love to see this new cast interact with the old one. Maybe some multiverse shenanigans are in order?

The story of Saints Row is about being the master of your own fate and how having friends and letting others in is important, even if you’re a flawed individual. While that’s not a very profound message and the plot is predictable, you don’t come to Saints Row games for an emotional The Last of Us-like story. The new characters are endearing, and the writing is full of lighthearted humor that never crosses the line to become annoying (see: Borderlands 3). As a result, Saints Row’s story is an enjoyable backdrop to formulaic open-world gameplay that it’s mostly disconnected from.

Weird is better than boring

From story to gameplay, Saints Row is by no means bad, but it’s also nothing grand. It’s just a project that lacks any real ambition. It feels like an open-world game that could’ve come out in 2014 and pushes the boundaries of the genre less than the two games that preceded it. Personally, I’d rather a game be super weird or super terrible rather than not surprise me in any way.

I understand why Volition wanted to try and get back in touch with the more grounded feeling of the first two games in the series, but because nothing takes the place of what was removed, beating Saints Row left me feeling unfulfilled even if I never hated my time with it. This is the one Saints Row game that never really jumps the shark in some way, so it feels milquetoast, clinical, and nothing more than perfectly adequate throughout. Those are adjectives that feel alien for a series with such a distinct voice.

Saints Row doesn’t do a lot terribly wrong outside of a few frustrating objectives. It also doesn’t stand out as particularly strong in any category other than character customization. After eight years and years of innovation in the open-world genre, the tame reboot feels stuck in the past, even if it’s an easily digestible and fun open-world adventure.

Clearing the story mode should take around 10 to 12 hours, but if you want to complete every Criminal Venture, Side Hustle, and other objectives around Santo Ileso, this game could easily last 20 hours.

Yes. Saints Row is a fine game if you’re looking for a by-the-numbers open-world adventure to tide you over as the fall release season ramps up. Don’t sweat it if you end up missing this game, though.

Topics
You can win cash with PlayStation’s new tournament feature. Here’s how to sign up
How long is Call of Duty: Modern Warfare II?
Dead Space remake gameplay trailer showcases an enhanced horror experience
The best horror games of all time
WWE 2K23 improves the wrestling sim with subtle tweaks and a bit of chaos
Meta Quest Pro VR headset is $400 off (and save on Meta Quest 2)
How to change classes in Fire Emblem Engage
Fortnite: How to collect Dragon Balls on Adventure Island
How to get all Emblems in Fire Emblem Engage
Fire Emblem Engage bond levels: how to get max Bond Levels fast
Marvel Snap Battle Mode: How to play Marvel Snap with friends
Best Gaming PC Deals: Save on RTX 3070, 3080, 3090 PCs
The best video game remakes reinvent the classics, they don’t just revisit them