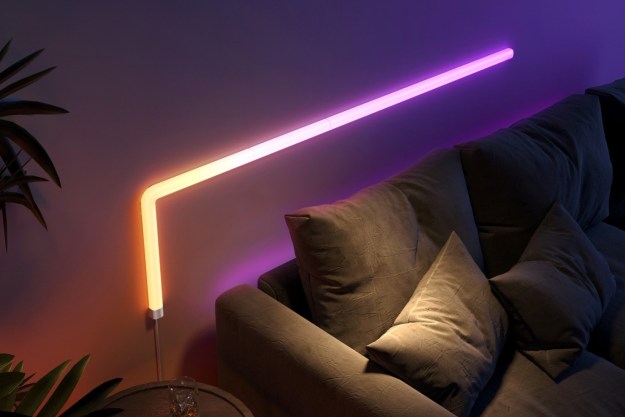 “The Govee Glide Wall Light can turn any bare wall into a masterpiece of dazzling colors.”

Govee’s been on a rampage. The last smart home maker to release new products with this much zeal was Wyze, but Govee has been on a much more frenetic pace in the last six months. What’s interesting to point out here is that the company’s focus has been fixed on just one product category, rather than dipping its toes into many areas. Smart lighting has been its specialty.

Moving a little outside of the smart lighting convention, the Govee Glide Wall Light offers a slightly different approach. Instead of being a light bulb or a lamp, it’s actually a modular set of light bars you can configure to decorate and adorn walls. If you’re tired of LED light strips that tend to be out of sight, this may pique your interest because it begs to be showcased front and center.

There are two kits available: A 7-piece system for $100 and a 12-piece one for $150. I tested out the 7-piece kit, but realized that it doesn’t offer as nearly as many arrangements as other wall lights — like the Twinkly Flex or Nanoleaf Lines. That’s because the light bars are connected in succession to one another and it only comes with a single 90-degree piece, making it nearly impossible to come up with a unique arrangement that stands out from others. Even if you happen to go with the 12-piece kit, you’ll probably need to pick up another one to really design something ornate. I chose to go with an L-shaped design because there’s not much else you can make without investing in more light bars.

Luckily, placing them onto the wall is a breeze because the undersides of the light bars have adhesive strips that seem to stay snuggly fastened to the walls. While the light bars may appear bulky, they’re actually lightweight enough to stay firmly in place. In fact, I’ve had the Govee Glide Wall Light set up for over a month now and there’s no indication that the adhesive has weakened. However, you’ll want to really finalize your wall design before placing them on the wall because once they’re up, it’s a pain trying to remove them.

Controlling the Govee Glide Wall Light is done through the accompanying Govee Home app for Android and iOS. Aesthetically, it could benefit from a visual makeover because parts of it look antiquated. Its saving grace is that Govee offers an extensive set of presets and modes that make for some dazzling light effects — including one that reacts to music, as well as an option to make your own custom light pattern.

You’ll definitely spend a lot of time creating a custom effect, since it requires you to select a color for a specific light bar. In comparison, I prefer Twinkly’s process for customizing its light patterns because it maps out your design beforehand using your phone’s camera. That way, it’s a much more straightforward and convenient way to set up a custom pattern instead of having to manually select each light bar through the app.

As mentioned, Govee does a nice job of offering a multitude of lighting effects. From pulsating effects to multicolor lights that turn on from end to end, I really love the choices it has to offer. The available options can match the mood or ambiance, so it’s really good in acting as an accent light. While most similar smart lights like this tend to be accents, I’m actually surprised by how it can act as a main source of light, too.

I’m actually surprised by how it can act as a main source of light.

When it’s nighttime, the Govee Glide Wall Light has enough potency to light up most rooms — making it useful for reading, which is surprising for of a 7-piece kit like this. I didn’t expect this, but it can replace the two floor lamps that I currently use in my home office. Colors are also pretty vibrant, but not as vibrant as the colors I’ve seen emitted by the Govee Lyra Smart Floor Lamp. Still, it’s not too shabby and most people would be pleased by its hues.

In terms of smart features, I wish it had a bit more beyond the usual — like voice controls using Alexa or Google Assistant. There’s a basic timer option for choosing days and times when it can go on/off, but I really would’ve liked to see more. For example, the Wyze Lights Strips Pro will automatically adjust color temperature to coincide with the time of the day.

With its simple setup and dazzling color patterns to choose from, the Govee Glide Wall Light has enough going for it without being too costly. Other smart wall light options offer better saturation and customization than this, but they’re also much more expensive. Govee’s offering strikes enough of a balance to make it an option to consider, unless you crave a more customizable design.

Right now, the Nanoleaf Lines are outstanding wall lights that offer better color saturation and more customization. You’ll pay a lot more for it, but you’re bound to stir some attention from visitors because of its iridescence and neat designs.

There’s also the Twinkly Flex, which is priced similarly to the Govee Glide Wall Light. Offering superior brightness output and saturation, the Flex has an advantage in the sense that it can be manipulated to create even more designs on the wall.

Encased by plastic, the light bars don’t weigh a whole lot and feel somewhat hollow. You could say that it feels flimsy. Govee offers a 1-year limited warranty to protect it from defects.

If you’re content with simple wall designs and don’t want to spend a fortune, the Govee Glide Wall Light is worth a look for its mesmerizing light patterns.

Topics
GE Lighting shows off flashy new smart lights at CES 2023
Best smart patio lights under $100
Best options for outdoor lighting at home
How to give smart home gifts
The best smart thermostats for 2023
Best Smart Plugs: What is a smart plug, and which do I need?
The best outdoor smart plugs for 2023
This Shark cordless vacuum is under $150 — who needs Dyson?
Apple HomePod vs. Apple HomePod 2023
Apple HomePod Mini vs. Apple HomePod
The best robotic lawn mowers for 2023
Blink Wired Floodlight Camera offers heaps of features and an affordable price tag
The best video doorbells for 2023