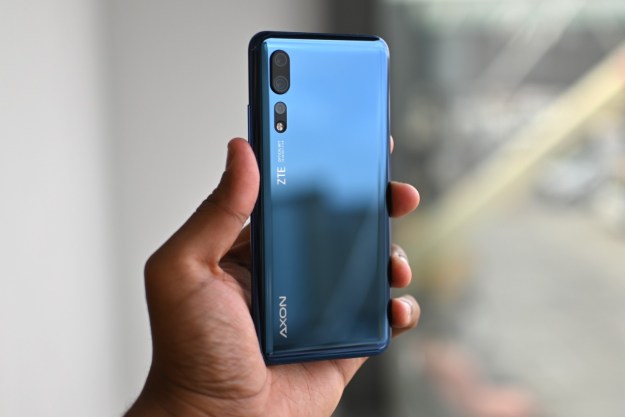 “This is the flagship killer for people that don’t want to pay $669 for the OnePlus 7 Pro.”

Everyone makes mistakes. Sometimes you forget the milk, have a drink too many or — if you’re having a real rough day — violate U.S. sanctions by selling components to Iran.

Can you say ‘oops?’ ZTE almost instantly disappeared from the U.S. after it plead guilty to “illegally shipping U.S.-origin items to Iran, obstructing justice and making a material false statement.”

Now, after two years, ZTE is staging a comeback tour lead by its new Axon 10 Pro smartphone. It has everything you’d expect from a flagship phone including a top-tier Qualcomm processor, a huge 6.47-inch screen, and a 48-megapixel camera. Best of all, you can buy it for just $549.

That undercuts most flagships, including the much-loved OnePlus 7 Pro. Is the Axon 10 Pro worth giving ZTE a second chance? Or is it too little, too late?

There’s nothing iconic about the Axon 10 Pro’s design. It’s attractive and immensely comfortable to hold with one hand, despite having a 6.47-inch screen. That’s because the bezels are so thin. Yet the back looks like a marriage of the Huawei P30 Pro and the iPhone XS. It’s not distinctive.

The blue color shines in the light and the edges curve in, making the phone feel smooth. The Gorilla Glass back does attract a lot of fingerprints, so you’ll be wiping it down frequently if you don’t use the included case in the box.

Around the phone, you’ll find a SIM tray at the bottom next to the USB-C charging port and a bottom-firing speaker, but no headphone jack. It’s an unfortunate but not surprising omission. Thankfully, a dongle is included along with earbuds. On the right edge are the power button and volume rocker. The power button has a tiny red dot on it to make it more identifiable, similar to the power button on Huawei phones.

There’s nothing iconic about the Axon 10 Pro’s design.

Where’s the fingerprint sensor? It’s under the display, a popular smartphone trend in 2019. It works well here, with fewer failure rates than some phones I tried earlier in the year. I’d still prefer a traditional sensor on the back, though.

The Axon 10 Pro looks and feels slick, but doesn’t have its own unique style. It does feel light and slim; coming from the Galaxy Note 10 Plus, I was always able to wrap my palm around it, and had no trouble reaching any of the edges (I do have large hands, though).

The 6.47-inch AMOLED screen with a 2,340 x 1,080 resolution is a highlight. There’s a little teardrop notch at the top — it’s easy to forget about — but otherwise, you’re treated to a bezel-less experience. It makes the Axon 10 Pro look contemporary and expensive.

The screen is sharp and gets reasonably bright outdoors — I didn’t have too much of a struggle reading on it during sunny days. It’s all-around satisfactory, but put it next to the OnePlus 7 Pro, and you can see where it falls short. The Axon 10 Pro’s screen has a noticeable yellow tint next to the OnePlus, colors are muted rather than vibrant, and the lower resolution is more evident (not to mention lack a 90Hz screen refresh rate). The OnePlus 7 Pro’s screen is better in every way, but it does cost $120 more.

ZTE is known to put an emphasis on audio, and the Axon 10 Pro is tricked out with stereo speakers that support DTS:X Ultra for surround sound as well as AptX HD for high-quality music streaming over Bluetooth. Music is loud and sounds good, though the OnePlus 7 Pro does edge it out here, as the audio quality sounds richer and there’s stronger bass.

I’m comparing it to the OnePlus 7 Pro, as it’s one of the Axon 10 Pro’s direct competitors. While so far the OnePlus beats it in screen and audio, I still think most people will be more than happy with what’s available on the Axon 10 Pro.

What makes the Axon 10 Pro such killer value is the processor that powers it. It has Qualcomm’s Snapdragon 855 with 8GB of RAM and 256GB of internal storage (there’s a MicroSD card slot if you need more storage). That’s the same specifications you’ll find in Samsung’s $950 Galaxy Note 10, except the Note 10 doesn’t have a MicroSD card slot. At $549 for the Axon 10 Pro, it’s an unquestionably superb value. The Asus ZenFone 6, which starts at $500, is the only phone with this processor that undercuts the Axon 10 Pro (in the United States, at least).

Here are a few benchmark results:

These benchmark scores resemble other phones that have the same chipset, even slightly beating the Galaxy Note 10 Plus, but falling behind the OnePlus 7 Pro and Asus ZenFone 6. Take benchmark scores with a grain of salt, though. In real life, the Axon 10 Pro had no trouble powering games like PUBG: Mobile, Pako Forever, and Alto’s Odyssey. Apps open quickly, scrolling through Recents is fluid, and multitasking works without a hitch. It’s powerful and more than capable for most people’s needs.

The experience is aided by the software, which is stock Android 9 Pie. There’s no ugly skin to bog the performance down. There are barely any third-party apps or ones from ZTE — even the gallery app has gone away in favor of Google Photos. It’s a simple user interface, but it’s uncluttered and easy to use.

ZTE says it will bring Android 10 to the phone before the end of the year.

Like most smartphones in 2019, the Axon 10 Pro jumps on the triple-camera lens train. It also jumps on the 48-megapixel camera bandwagon for the primary sensor (with an f/1.7 aperture). The other cameras have an 8-megapixel telephoto lens with f/2.4 aperture, offering 3x optical zoom, as well as a 20-megapixel wide-angle lens with an f/2.2 aperture. By default, the camera uses pixel binning technology to merge pixels and take in more light, resulting in a 12-megapixel photo from the main sensor.

You can force it to take 48-megapixel (MP) photos. We’ve explored if 48MP is worth it on phones, and the answer is mixed. You should know that taking 48MP photos will take up a lot of storage space.

The camera app is snappy and smooth and there’s virtually no shutter lag, which is always a treat. 48-megapixel photos are detailed, though the colors are at times a bit muted. There’s not a lot of contrast, so images can look flat. I do love the versatility afforded with the 3x optical zoom, as the camera can zoom in more than other phones, and swapping to the wide angle affords a whole new look. ZTE even lets you go up to 20x digital zoom, and the quality is surprisingly good if you’re in broad daylight.

The telephoto and wide-angle lenses are weak in low light, and while the standard lens can produce decent photos, you must stay still so you don’t end up with a blurry photo. Low-light images can look blotchy and lacking detail, and the dedicated Night mode doesn’t change the result too much.

Compared to the OnePlus 7 Pro, as seen in the photos above, the OnePlus offers warmer tones that are a little more accurate than the Axon 10 Pro, as well as brighter pictures with less grain and stronger contrast. The wide-angle lens on the Axon 10 Pro doesn’t have as much detail as the OnePlus photos.

ZTE has a portrait mode option. It requires multiple tries to get the right photo as it frequently struggles with accurately outlining the subject. Detail takes a hit here, and the bokeh effect doesn’t look too pleasant.

The 20-megapixel front camera, which can be used to unlock the phone, is average. If there’s good lighting, selfies look detailed with nice colors, but you need to be quite still here to avoid blurry results. Photos are solid at night, though the colors are dull and there’s a lot of noise.

It’s a respectable camera system, though it falls short of the OnePlus 7 Pro.

Battery life is fantastic on the Axon 10 Pro, easily lasting a full day of moderate use thanks to its 4,000mAh capacity. I frequently ended my work days with around 50 percent left by 6 p.m., sometimes a little less. Heavier use saw the phone drop to 30 percent by 8 p.m. I have yet to feel any battery anxiety with this phone.

In our standard video playback battery test, where we play a 1,080 YouTube video over Wi-Fi with the brightness on max, the Axon 10 Pro lasted a respectable 10 hours and 8 minutes. It’s shy of the Galaxy S10, Asus ZenFone 6, and OnePlus 7 Pro, but beats the Galaxy S10e.

ZTE’s phone does have a leg up over the OnePlus 7 Pro and ZenFone 6 when it comes time to charge, because it has support for wireless charging. It’s a convenience, but if you’re upgrading from a phone that used to have wireless charging, it’s a point favoring the Axon.

The phone will only work on GSM networks like T-Mobile and AT&T, so you’re out of luck if you’re on Verizon or Sprint. It’s available from ZTE’s website, Newegg, and B&H Photo and Video.

ZTE offers a standard limited warranty that covers manufacturing defects up to one year from the date of purchase.

The ZTE Axon 10 Pro has a good screen, bland yet attractive design, strong performance, and great battery life. It has a more than capable camera, but it suffers from strong competition. This is the flagship killer for people that don’t want to pay $669 for the OnePlus 7 Pro.

There’s a lot of competition in the mid-range space. The Google Pixel 3a is your best bet if you want the absolute best camera, even if it’s not as versatile with only a single lens, and fewer software features. It’s also more affordable at just $400.

The Asus ZenFone 6 can easily give you two days of light use with its massive 5,000mAh battery. It has the same processor as the Axon 10 Pro, so performance is excellent. The camera is capable, too.

If you can stretch your budget, the OnePlus 7 Pro at $669 is the best phone you can buy out of this whole lot. It has a spectacular screen, a more-than-capable triple camera system, customizable software with helpful features, strong performance, and solid battery life. Check out our best cheap phones guide for more.

The Axon 10 Pro should last two to three years, if not a little more, before the battery starts to degrade. The phone will get Android 10 before the end of the year, and it’s likely ZTE will deliver Android 11 next year as well — after all, it recently pushed an update to the Axon 7, a three-year-old phone.

It’s IP68-rated for water resistance, so it will be able to survive a dip in the pool. A case is included in the box, and it’s worth slapping it on as the phone has glass on both sides.

Yes. The Axon 10 Pro is a great choice if you don’t want to spend much more than $600 on a smartphone,