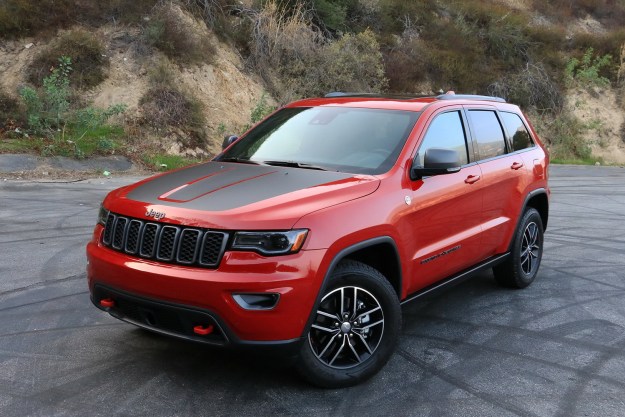 “Jeep's Grand Cherokee can still go off the grid, but remains comfortable between adventures”

Like many automotive enthusiast contingents, Jeep fanatics tend to be a pretty vocal bunch. In recent years, there was a growing sentiment among them that – with the exception of the Wrangler – the Jeep lineup had gone soft, opting to cater to customers wanted a convincing aesthetic but had no intention of actually taking their vehicles off the beaten path (short of occasionally barreling over a median in a tight parking lot).

Those enthusiasts might’ve pointed their finger at the previous generation of the Grand Cherokee Trailhawk, a package that ultimately stayed within safe distance of the standard soft-roader Grand Cherokee equation while raising the asking price by a significant margin.

However, this time around Jeep has made a more earnest effort to turn the Grand Cherokee into a viable alternative to the Wrangler when venturing out where the pavement ends, while also retaining the livability of a typical SUV. That can be a tricky proposition, as capable dirt dwellers often compromise street-friendly manners in the pursuit of off-road prowess.

But the Grand Cherokee Trailhawk has a few clever tricks up its sleeve, and while it can’t satisfy the demands of every potential Jeep customer simultaneously, a week with the sport-utility provided some insight into its surprisingly effective split personality.

At first glance, one might dismiss the Grand Cherokee Trailhawk as a tire-and-sticker treatment designed to achieve a look, as the package is fairly subtle in its aesthetic execution, but there’s a lot going on underneath the skin that earns the Trailhawk its Trail Rated fender badge. That rating signifies that the Grand Cherokee Trailhawk has passed the battery of off-road tests conducted by the Nevada Automotive Test Center (NATC), which evaluates vehicles for traction, ground clearance, off road articulation, maneuverability, and water fording.

While competence in the dirt is obviously important, the requirement of day-to-day livability is equally vital.

To achieve that, Jeep engineers outfitted the Trailhawk with a long list of standard hardware, including a specially tuned version of Quadra-Lift air suspension that allows for more articulation than the standard system, along with a two-speed transfer case, an electronic rear limited-slip differential, and Jeep’s Quadra-Drive II four-wheel-drive system. Skid plates protect vital underbody components, while the Trailhawk’s 18-inch aluminum wheels are wrapped in Kevlar-reinforced Goodyear Adventure all-terrain tires.

Fortunately, Jeep hasn’t neglected the need for livability in the pursuit of this off-road capability. The Grand Cherokee Trailhawk also comes standard with heated and ventilated front seats, a 506-watt nine-speaker audio system, an 8.4-inch touchscreen infotainment system, and a number of additional comfort and convenience features, resulting in a surprisingly well-rounded package designed to appease one’s urge for adventure as well as their need for a little coddling on a day-to-day basis.

During our First Drive of the Grand Cherokee Trailhawk back in September, our seat time was largely relegated to the off-road trails of the Malibu Hills. While that’s undoubtedly a logical locale to showcase the Trailhawk’s off-road behavior, it does leave some unanswered questions about the SUV’s street manners. In the real world, the latter is where the Grand Cherokee Trailhawk will likely spend the vast majority of its time, so while competence in the dirt is obviously important, the requirement of day-to-day livability is equally vital.

The Trailhawk’s air suspension might seem like an unusual choice for a vehicle tuned for off-roading, but it starts to make a lot more sense out on the street. It proves to be a far cry from the fairly harsh ride of other capable off-roaders like the Ram Power Wagon, offering plenty of compliance without feeling floaty during freeway maneuvers.

There are some minor quibbles, however. Chalk it up to either this author’s addiction to horsepower or the Trailhawk’s hefty curb weight, but the base 3.6-liter V6 – while capable of doing the job – feels a bit strained at times out on the road. Even with the eight-speed automatic’s numerous cogs on hand to provide mechanical leverage and paddle shifters on the steering wheel providing direct control over the proceedings, 4900 pounds is a lot of mass for 295 horsepower and 260 pound-feet of torque to contend with. It’s not a deal breaker by any means, but acceleration isn’t always an effortless affair either, and the extra 130 lb-ft provided by the optional 360hp 5.7-liter V8 might be appreciated by lead foots, especially during highway passing.

Also, while we’d still consider FCA’s current Uconnect system to be one of the strongest infotainment system offerings in the industry, it’s still a bit disappointing to find that the updated version of the system isn’t on hand here in the Grand Cherokee Trailhawk while other ’17 models in the FCA portfolio are starting to roll out of the factory with those upgraded electronics.

But aside from not being the latest and greatest available, there’s little to complain about with this 8.4-inch touchscreen system – it’s just as responsive, feature-rich and free of temperamental behavior as it is in the numerous other vehicles across the company’s lineup that utilize it. Similar to Dodge’s SRT Performance Pages, Jeep’s Off-Road Pages feature within the Uconnect system provides a wealth of real time data including wheel articulation, drivetrain settings, system temperatures, and so on.

Unlike many vehicles tuned to be capable off-road, the Grand Cherokee Trailhawk makes very few compromises on the street to make that a reality, and the package’s combination of standard features that satisfy both capability and comfort are indeed impressive.

Ultimately, the Trailhawk package is probably overkill for most drivers who don’t plan to put the SUV through some pretty unforgiving terrain on a regular basis. But for those that do, there’s plenty of reasons for this Grand Cherokee to be on the shortlist.

Despite the wealth of mid-sized SUV options on the market, there are surprisingly few that offer off-road capability on same level as the Grand Cherokee Trailhawk. The Land Rover Discovery offer similar prowess with much more refinement, but it also commands a significantly higher price tag.

The next redesign for the Grand Cherokee is expected for the 2019 model year at the earliest, so the current generation definitely has some life left in it.

Aside from its heavy duty (and thus theoretically durable) mechanicals, the Jeep’s longevity is fairly bulletproof from an electronics standpoint as well, as the Uconnect infotainment system has a fairly comprehensive suite of features – despite the fact that latest available version of the system isn’t used in the 2017 model year Grand Cherokee Trailhawk, and likely will be next year.

For those that don’t require the off-road hardware, there are numerous alternatives available that are worth considering. But if you need an SUV with genuine capability where the road ends, the Grand Cherokee Trailhawk is one of very few choices on the market – especially in this price range.

Thankfully it’s a solid driver on the street as well, with enough standard features to keep all occupants content during day-to-day use. We say go for it.