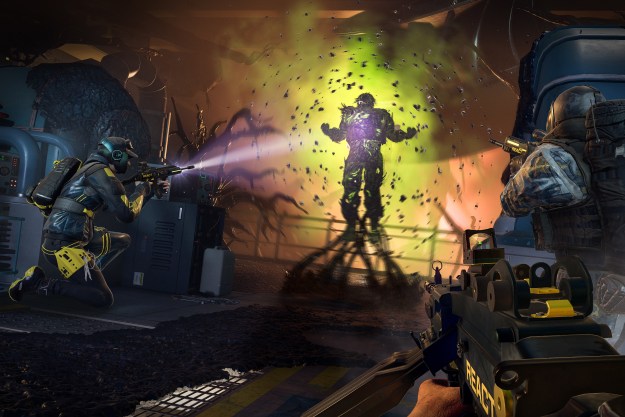 Ubisoft’s Tom Clancy brand of games is in the middle of an identity crisis. What initially started with engaging tactical shooters like Rainbow Six and Splinter Cell is now home to competitive shooters with wacky names like XDefiant, battle royales, and now, a Left 4 Dead-inspired cooperative shooter where players fight off an alien parasite.

Rainbow Six Extraction spun off from a limited-time mode of the popular competitive multiplayer shooter Rainbow Six Siege. It’s an attempt to adapt Siege’s methodical, team-focused gameplay into a cooperative setting while stretching the limits of what the Rainbow Six subseries can be about.

Rainbow Six Extraction is a perfect example of the Tom Clancy brand’s current struggle. While its more tactical pace stands out within the cooperative shooter genre, its lack of an engaging narrative and it repetitive gameplay mean that the best aspects of the game don’t get the time to shine.

A race of aliens called the Archaeans and their Chimera parasite have attacked Earth. In response, several operators from Rainbow Six Siege team up, form the “Rainbow Exogenous Analysis & Containment Team (REACT), and try to fight back against this overwhelming threat.

Ubisoft barely seems to care about the plot of Rainbow Six Extraction.

REACT is led by three notable Rainbow Six Siege operators — Ash, Thermite, and Mira. As a Rainbow Six Siege spinoff, Extraction had the opportunity to expand on Siege‘s lore and allow us to get to know some of the most popular operators better. We’ve seen Riot Games successfully pull this off for League of Legends champions via the Netflix show Arcane and spinoffs from Riot Forge focusing on specific characters.

Sadly, that’s far from what we get. Ubisoft barely seems to care about the plot of Rainbow Six Extraction. There are only around 11 minutes of cutscenes (including a tutorial debrief and a pre-game cinematic). Most operators lack personality, and the threat doesn’t scale narratively in a compelling way.

Rainbow Six Extraction has as much in common with Firaxis’ strategy game series XCOM as it does with previous Rainbow Six titles. Players slowly and tactically move through alien-infested areas, completing objectives that range from capturing Elite enemies to taking samples from nests that spawn Archaeans. If XCOM were a first-person shooter instead of a turn-based strategy game, it would look a lot like Rainbow Six Extraction.

Another thing Rainbow Six Extraction has in common with XCOM is that it’s excruciating difficulty. Most of the Archaeans that players encounter are just as, if not more, powerful than them in some way. Some explode, others trap you in the spikey sludge the Archaeans leave behind, and some will just ferociously charge at you.

Rainbow Six Extraction’s more methodical approach to gameplay helps the game stand out from its peers.

Playing smart is required to succeed at just one objective with high health, and each run has at least three objectives players can complete. If the player fails, their teammates must extract their body. Otherwise, their operators will go MIA and then must be saved and extracted during another run via one of the game’s most frustrating objectives.

Most cooperative shooters like to focus on speed and bombast, so Rainbow Six Extraction’s more methodical approach to gameplay helps the game stand out from its peers.

While its tactical gameplay feels fresh, the full package is thin. Overall, Rainbow Six Extraction features 13 different objectives for players to clear. Players will see every objective that the game offers within a couple of hours and then be asked to repeat them ad nauseam.

Different maps provide a change of scenery and Rainbow Six Extraction in general looks gorgeous on next-gen systems. Still, these levels don’t feel very distinct from each other. As such, it’s a long grind where you’re completing the same objectives in the same areas over and over again, with the randomness of enemy placement and the objective order being the only real variation. The endgame variations also don’t do much to spice things up as they just add additional steps to progress or limit the usable operators.

Team up with friends

When playing with people that you know, you can carefully planning out your next move, and the whole experience meshes together pretty well. The MIA system also adds real stakes to each action players make. Stray too far from that, though, and the experience becomes much less enjoyable. Rainbow Six Extraction isn’t fun to play solo.

While single-player incursions are possible, the difficulty becomes a little too overwhelming. Operators will die and go MIA a lot more often, and the objective to free a missing operator is near impossible without dying if you’re alone.

A cutscene featuring some operators questioning solo deployments actually plays the first time players try to do an incursion, so even Ubisoft seems to know it’s not the best way to play. The next best solution is to choose quick play and do incursions with random players, but this comes down to the luck of the draw.

Some players will be careful and communicate, while others will just run in guns blazing and ruin any strategy that Rainbow Six Extraction encourages. If you don’t have two friends to play with, really consider whether or not you’re willing to put up with these issues.

A multiplayer-focused game will always be more fun when playing with friends, but games like Left 4 Dead and Back 4 Blood are still just as fun in single-player or with random players as they are with friends. They also don’t feel as ridiculously punishing and repetitive in single-player as Rainbow Six Extraction does.

While Rainbow Six Extraction stands out within its genre and the Tom Clancy lineup of games as a whole, it rarely does so to its advantage. This extremely tough experience becomes more frustrating if you play it alone or with random players. If someone is looking for a very involved cooperative game to play with their best friends, Rainbow Six Extraction may grab their attention, but its repetitiveness and terrible grind may get to players after a while.

The cooperative horde shooter genre is in the middle of a renaissance currently. I’d recommend Back 4 Blood as a more consistently engaging and exhilarating game within the same genre. If you enjoy the game’s tactical nature and alien invasion premise, check out the strategy game XCOM 2.

How long will you last?

While unlocking every operator, map, and mode could easily take you upwards of 20 hours, Rainbow Six Extraction doesn’t have a definitive endpoint and is designed to be played almost endlessly.

No. If you’re a Rainbow Six Siege or cooperative shooter fan and have friends to play it with, Rainbow Six Extraction may be worth a cursory glance on Xbox Game Pass. I wouldn’t recommend spending money on it, though.

Topics
Xbox Game Pass new games: what’s new and what’s leaving in February 2023
Redfall’s May 2 release date revealed during Developer_Direct
Goldeneye 007 comes to Game Pass and Nintendo Switch later this week
Xbox and Bethesda’s Developer_Direct: how to watch and what to expect
With Valiant Hearts: Coming Home, Netflix finds its video game voice
The best guns in Dead Space
The Crew Motorfest brings a racing festival to Hawaii this year
The best skills to inherit in Fire Emblem Engage
Dead Space: how to fix the centrifuge
How to fast travel in Forspoken
Star Wars Jedi: Survivor will now release in April following delay
How to get the Silver Card in Fire Emblem Engage
One Piece Odyssey’s great ending would have made for a perfect anime arc