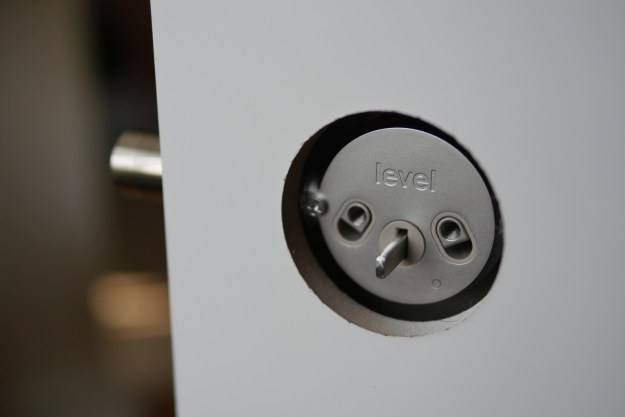 “Your neighbors won't be able to tell. That's how much the Level Lock looks like a standard lock.”

I just don’t like Level’s smart locks, I absolutely love them. Why’s that you ask? Well, it’s mainly because they don’t follow the traditional smart lock design, which tend to feature ginormous housings over the deadbolt and an obvious keypad on the outside. Quite simply, Level’s smart locks look like traditional locks. You’d be hard-pressed to even distinguish the difference.

The Level Lock is the company’s latest offering, which follows the same principles as its siblings. Some folks might be confused by the differences within the current offerings, but the Level Lock sits in the middle of the lineup at $249 — complementing the hotel key-esque $329 Level Lock Touch Edition and the original Level Bolt priced at $199. After testing those previous locks, I naturally have high expectations with the latest Level Lock.

After installing two previous Level smart locks, this one was a breeze, taking me no more than seven minutes to install. The Level Lock consists of three main components: The strike plate, motor, and key cylinder housing. It’s a fairly straightforward process, and for the average person, it should take no more than 15 minutes to install from start to finish.

Unlike the original Level Bolt smart lock that essentially turned your existing lock into a smart one, the Level Lock is an all-in-one, complete lock solution that replaces your existing deadbolt. This means you’ll need to start carrying a new set of physical keys, as opposed to the one you’ve been using. This is basically the biggest differentiator between the two smart locks. Conversely, the Level Lock Touch Edition is similar to the Level Lock but adds NFC-based keycards as an alternate form of unlocking.

As always, Level does a wonderful job with its designs and this newest one doesn’t change up the recipe. Level claims it’s the smallest smart lock ever, but it honestly doesn’t differ all that much from the Touch Edition.

From the outside, I still love the fact that it looks like a normal lock you’d find on any door. It doesn’t draw the same attention as other smart locks with fancy fingerprint sensors or bulky keypads outside, which is one way of deterring potential hackers.

There’s really no one else designing smart locks that retain the look and decor of your existing lock, so it’s tough to find fault with a design that’s elegant, beautiful, and contemporary. Level offers it in four finishes: Satin nickel, satin chrome, polished brass, and matte black to match any decor.

I still love the fact that it looks like a normal lock you’d find on any door.

Much like the design of the lock, the app itself follows the same simple and straightforward approach. From the main screen of the app, I have access to unlocking the lock, setting up passes to grant temporary access, and modifying some of its settings — like choosing how long it requires for the lock to automatically lock itself in the event I forget to do it myself.

Functionally, the Level Lock functions exactly like the other smart locks in Level’s lineup. While you can choose to access the lock using the mobile apps, I really appreciate that the Level Lock continues to offer an automatic unlock feature whenever I get close to the door with my phone in my pocket. It’s able to do this because it sets up a geofence around my location, so when I’m within that vicinity, the Level Lock will automatically unlock itself. As for leaving, you can choose how long it takes to self-lock once it’s been opened.

The only persisting issue I hope gets remedied at some point is the example of having to reenter my apartment because I forgot something while walking out the door. Since I have the Level Lock set to automatically lock after one minute, it knows that I haven’t left the geofenced area yet — so the lock won’t automatically unlock itself when I approach the door. I just wish there were a way to adjust this, but there isn’t one yet.

Otherwise, the Level Lock offers all the convenience you’d want in a smart lock. It comes in handy when returning from a store with both hands carrying groceries or packages, so I don’t need to fumble around for keys. It just begins to unlock itself automatically when I’m about 10 feet away. Best of all, the mechanism is smooth and fluid — so the deadbolt is locked correctly each and every time.

Just like the other Level smart locks, the Level Lock is powered by a single CR2 battery, which comes included with the packaging. Unfortunately, the app doesn’t tell you a percentage, so it’s impossible to gauge its performance at this point. Instead, the app only indicates that it’s in a “healthy” status.

On its landing page, Level claims that the battery life rating is upwards of one year, but I’m a little skeptical because the Level Lock Touch edition needed a replacement after 9 months. Despite that, I still think achieving more than six months is commendable.

If you don’t need the fancy touch unlock functions of the Level Lock Touch Edition, then the new Level Lock will suit all of your needs. It’s still one of the best-designed smart locks out there, accompanied by all the smarts you’d expect in a modern smart lock — like automatic unlock, voice control (works great with HomeKit), and temporary passes for guests.

Considering that this is $80 less than the touch-enabled version, this Level Lock saves you money while still delivering outstanding features with a modern design that few can match.

Yes, it’s still pricey, which is why affordable smart locks like the Wyze Lock present themselves as great alternatives. You’re paying less for similar features, but its design follows after traditional smart locks.

On the other end of the spectrum, some people will appreciate the more-is-better approach. Smart locks such as the Eufy Security Smart Lock Touch, Lockly Duo, and Kwikset Halo Touch all have fingerprint sensors as another way of unlocking. These locks with fingerprint sensors are useful if you forget to bring your smartphone with you.

The Level Lock feels well constructed and it’s composed mostly of metal components. Level explains that it uses a patent-pending, six-stage stainless steel gearbox to endure just about any conditions. In the event of a defect, there’s a two-year limited warranty, which is generous given most others offer one-year warranties.

You bet! Level has three options to choose from, but for those looking for a brand new lock to swap out whatever they have now, the Level Lock is an outstanding choice that doesn’t have the clunky look or operation that I tend to see with standard smart locks. It does away with the extra baggage by trimming off the fat.