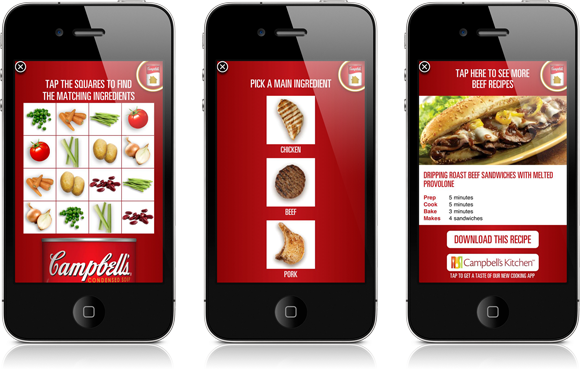 Apple teamed up with Campbell’s Soup and Nielsen in a study that it claims proves iAds are twice as effective as traditional alternatives. And the claims don’t just insinuate the iOS marketing scheme can be successful – they make some sweeping statements about its superiority.

Apple’s iAds have been in the works for awhile and were introduced some months ago. Campbell’s was one of Apple’s first clients for the platform, and apparently is thrilled with the decision. According to AdAge, “Those exposed to one of Campbell’s iAds were more than twice as likely to recall it than those who had seen a TV ad.” In Nielsen’s five-week study, it appeared that consumers who viewed Campbell’s advertising on an iOS device “remembered the brand ‘Campbell’s’ five times more often than TV ad respondents, and the ad messaging three times more often.” What’s more is that participants exposed to iAds were four times more likely to buy Campbell’s products than those who saw TV commercials.

One discrepancy that seems worth noting is that the TV viewers were selected by Nielsen, whereas the iAd respondents were “recruited within various apps.” Even still, this just means that the participants chosen to respond to iAds are Apple owners to begin with, meaning they could be more prone to being affected by anything pushed to them through such a device – something advertisers should be excited to hear. Smartphones are naturally more interactive than television, and it seems like people are responding positively to this.

Director of global advertising for Campbell’s Soups Jennifer Gordon is convinced by Nielsen’s findings. “We have a lot of data that goes many years back for TV print, out of home and radio, but we’re searching for more validated metrics in mobile. This does show, in really traditionally brand metric terms, that iAd really outperformed.” Gordon also claimed the iAd numbers beat those for traditional online static banner ads. It doesn’t hurt that iAd campaigns are a fraction of the cost of TV ads. At the moment, our smartphones aren’t flooded with ads, but will they be as effective when it comes to that point?