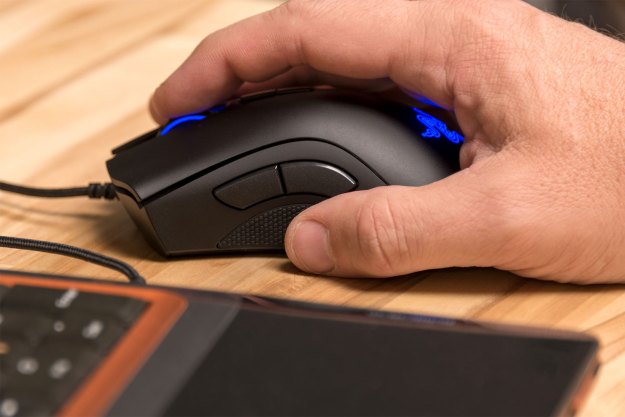 “The DeathAdder Elite looks familiar, but the power under its hood takes it to new heights.”

The world of gaming mice is vast and complicated, with way too many brands offering far too many different models. To make matters worse, mouse specifications like DPI, sensor accuracy, and lift-off distance don’t easily convey the product’s performance.

With the new DeathAdder Elite, Razer trumpets numbers like a 16,000 DPI sensor, 99.4 percent resolution accuracy, and tracking speeds of 450 inches per second. But there’s a lot more to this mouse than digits on a page.

The DeathAdder Elite has to walk in the original DeathAdder’s footsteps. This is a mouse with a lot of fans out there who might be looking to upgrade, without changing what’s already working. Does the DeathAdder Elite follow through, or will last year’s model suffice?

Same as it ever was

Fans of the previous DeathAdder models will be pleased to know that the design hasn’t changed much. It’s still a right-handed mouse with a pair of under-thumb buttons on the left side. The only notable addition are two small buttons right behind the scroll wheel, which control sensitivity by default.

The look hasn’t changed much, either. Razer’s all-black aesthetic has served it well over the last few years, and the DeathAdder picks up that mantle without contributing anything new to it. Among today’s increasingly gaudy and Transformer-esque mice, Razer’s aesthetic choice is starting to look understated.

Razer has few devices in its arsenal without its Chroma RGB LED lighting. Even the previous generation’s DeathAdder Chroma featured it. Typically, Razer’s implementation is very nice, like the band of light encircling the Razer Mamba. In the DeathAdder’s case, it’s a little disappointing, as the only light comes from the scroll wheel and logo on the back, and your hand covers them most of the time. It still beats Logitech’s version of RGB LED lighting, however, which we found gave the lights on the Prodigy G403 a blue tint.

Like all modern, wired mice, the DeathAdder attaches to your system via a seven-foot braided cable and gold-plated USB port. Few gaming mice still use rubber cables, so the Razer’s braided cable isn’t exactly revolutionary. But at least it won’t get in the way.

The DeathAdder Elite actually has two more buttons than the DeathAdder Chroma, bringing it in line with the high-end Mamba series, for a total of 7 buttons. The two left-hand buttons have a deep action and a satisfyingly noisy click. They’re drawn in a light curve to match the inside edge of your thumb, positioned above the textured spot near the bottom of the mouse, so you have to reach a little to hit them. But you won’t accidentally bump them during dramatic movements. Their generous size makes them ideal for actions you need quick access to, such as using your melee attack in a first-person shooter.

There’s another pair of small buttons right behind the scroll wheel. It would be tough to use them as action buttons, but they work well for quick adjustments to sensitivity, or other settings. They’re also useful to flip between different profiles, although Razer’s Synapse software supports automatic profiles tied to specific games.

An Omrom mechanical switch is hiding underneath each main button. They provide a satisfying click and a fast action time, with low debounce (the term for the time it takes for a button to go back to a ready state after being pressed) for no disruption to speedy clicking.

From shooters to browsing

While many outlets, including ours, have stressed the importance of near-perfect sensor accuracy, it’s likely not a feature that regular users are going to notice in most situations. What they will notice is the DeathAdder Elite’s massive range of DPI sensitivity, which stretches from 100 DPI all the way up to 16,000.

The only time the sensor accuracy may start to reveal itself is when that DPI drops to sub-1000 levels. Dropping DPI dynamically to super low levels for sniping accuracy, or raising it to turn around faster, is becoming increasingly common for competitive PC gamers.

The DeathAdder is on the heavy side, at 105 grams, which can get old after long sessions. That’s the price of sturdy construction. With that said, it’s lighter than high-end options like the Razer Mamba, and mice with many buttons, like the Corsair Scimitar.

Most gamers will find it a good fit for any game, as well as comfortable enough for casual use. It only falls short in games that benefit from having many buttons under-thumb, like action role-laying games, or MMOs. Even then, the lack of buttons only matters if you’re the type of gamer who prefers to bind actions to your mouse, instead of using the default keyboard bindings.

Synapse is suggested, but not required

Not much has changed in Razer’s software suite in the last year or two. The main application in the suite, Synapse, handles lighting profiles and performance customization, and is cloud-based, so your settings come with you when you sit down at a different machine. It’s a robust application with no shortage of performance options including DPI settings, macros, custom button controls, surface calibration, automatic profile switching, heatmaps, and other data about mouse usage. If you have multiple Razer devices, it handles all of them from within a single menu, and can even coordinate colors and profiles between them.

One thing that’s changed, at least in our review unit, is the mouse doesn’t attempt to install the software the first time it’s installed. There’s frequently a misconception that Razer peripherals require Synapse to operate, which isn’t true. Now it’s clearer that’s the case, as Synapse won’t harass you with pop-ups if the software isn’t already on your rig.

Razer offers a two-year warranty with all of its mice, regardless of price point. That’s industry standard, with the same warranty found on the Logitech and Corsair offerings. Mionix is an exception to that rule, with just one year of coverage in the United States.

Razer’s DeathAdder may have added the word Elite to its name, but it’s the same DeathAdder that fans of the mouse have come to know and love. With modest upgrades to sensor DPI, accuracy, and a couple extra buttons, it would be more accurate to call this the DeathAdder 2.

Frequent MMO players may be more drawn to the Corsair Scimitar, which features a full panel of 12 customizable buttons up the left side of the mouse. It has a slightly lower, 12,000 DPI sensor, but the extra buttons are crucial to specialized play.

We’re less enthused about Logitech’s offerings at the price point. We recently tested the Prodigy G403 and found that the build quality was mediocre for its price. It also didn’t provide nearly the feature set, and its RGB lighting had a distinct blue tint to it.

The Razer faces its toughest competition from the Mionix Castor. This unassuming gaming mouse boasts a very comfortable ergonomic design, with lightweight software that loads the configurations to the mouse, instead of storing them on the cloud. It has one less button and a smaller DPI sensitivity range, but is still a very competitive offering that may suit those who use a claw grip better.

With a high DPI sensor and solid build quality, the only reason you’d need to replace the DeathAdder is if mice become obsolete, or you drop something heavy on it.

The mechanical Omrom switches under the main keys are rated for up to 50 million clicks. While there are likely mechanical switches of some form hiding under a lot of gaming mice, we don’t often hear about them, so the longevity is worth mentioning.

Yes. The DeathAdder presents a solid value in the mid-range mouse category, with a modest feature set and robust software support. If your gaming routine demands specialized functionality like a bunch of extra buttons or wireless connectivity, you’ll have to go elsewhere.

For almost everyone else, the Razer DeathAdder Elite adds to the functionality of an already well-respected gaming mouse, without raising the price. There’s a reason the DeathAdder looks much the same as it has in previous years. If it ain’t broke, don’t fix it.