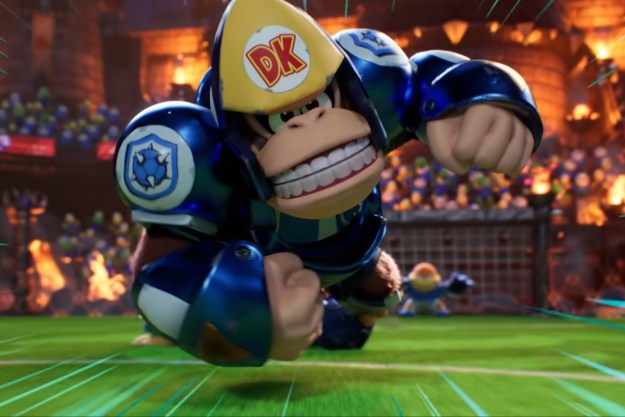 “Mario Strikers: Battle League delivers the deepest Mario sports experience yet, with surprisingly nuanced soccer gameplay. There's just not much to do once you've mastered those skills.”

If you want a clear picture of how much Nintendo’s approach to games has changed over the years, look no further than Mario Strikers: Battle League. Previous Mario sports games used to be filled to the brim with characters, unlockables, and modes designed to test players’ skills. But Battle League, like last year’s Mario Golf: Super Rush, is more of a sparse framework that Nintendo plans to build up over time with free updates.

It’s an approach indicative of a more modern Nintendo, one that seems interested in getting more mileage out of its titles. To do that, though, it needs to produce games with a rock-solid core experience. That’s what Mario Strikers: Battle League aims to deliver at launch. The title is the first dedicated Mario soccer game since 2007 and as such, developer Next Level Games put a lot of care into refining and modernizing the experience. That part is a smashing success; it’s the rest that needs work.

From a pure gameplay perspective, Mario Strikers: Battle League might be the deepest and most nuanced Mario sports experience yet. The question is simply whether its bare-bones approach to content can hold your interest long enough between its much-needed updates.

While Mario Strikers: Battle League is the first Strikers game since the Wii, Mario did briefly return to the pitch in 2017’s middling Mario Sports Superstars. That game featured sluggish 11-versus-11 soccer matches with hardly any depth or gimmicks to keep things interesting. Battle League’s best quality is that it takes a full pivot from that title to deliver faster games that lean into action and strategy.

I’m surprised by how much nuance there is here compared to other Mario sports games.

“Strike” matches pit two teams of five against one another in quick four-minute matches. Players control four characters while a computer-controlled goalie holds down the net. On a basic level, it’s easy to understand. Gain possession of the ball, pass it to teammates, and try to score a goal. There’s a fair bit of rough-housing too, as players can tackle one another into the electrified sides of the field or toss items like oversized bombs and shells. But as I went through the game’s lengthy tutorials, I quickly learned that there’s a lot more depth than I usually expect from a Mario sports game.

For instance, I can tap B to pass to my teammate normally or Y to perform a lob pass. Simple. But if my teammate holds B or Y while I’m passing to them and releases it when the ball gets to them, they’ll send it flying back as a perfect combo pass, setting me up for a powerful follow-up. There’s a standard tackle, but charging it up and releasing it at the right time will result in a more powerful charge attack. The same goes for shooting, as players can launch a stronger hit with precise timing. Matches are gripping as a result, requiring precise timing, constant risk assessment, and sterling communication if playing with friends.

I’m surprised by how much nuance there is here compared to other Mario sports games. Simply taking loose potshots at the goalie isn’t a viable strategy. There’s a real sense of mastery to each little move, from standard shots to dodges, that rewards high-level players. I learned that the hard way when I dove into a match with CPU players set to “hard” and got trounced 8-0. My jaw dropped when I realized how quickly and efficiently a well-oiled team could string together moves.

That does put the game in a tricky position. Ultimately, it functions best as a party game, with support for up to eight players locally. All those little complexities aren’t exactly easy to explain to kids or friends — the tutorial took me something like 30 minutes to complete and I still didn’t have every piece mastered by the end. It almost feels like it has a skill curve more akin to a fighting game, especially since AI goalies don’t leave much room for early points. All of that makes it a much better competitive game than perhaps any Mario sports game, but it might not be a go-to party pick.

The core soccer gameplay is strong enough on its own, but the Mario setting gives it extra charm. The game features some of the best character animations I’ve seen in any Mario game. You may have already seen some popular ones going around Twitter, like Princess Peach having to suppress her boiling rage after her opponent scores a shot. Each of the game’s 10 playable characters really get to show off their personality here between victory dances, frustrated fits, and gorgeously animated special shot animations. My personal favorite involves Wario using his giant butt to send the ball hurtling toward the goalie like a cannonball.

Finding the perfect role for each character and creating a perfectly balanced team has been my favorite part of the experience so far.

Characters aren’t just there for Mushroom Kingdom set dressing. They have an incredibly impactful role on gameplay. Each character has stats that affect their speed, tackle strength, shooting ability, and more. Those traits can be tweaked through unlockable gear across four slots (head, arms, body, legs), which will reduce one stat, but raise another. On my go-to team, I set up Waluigi to be a speed demon who could move the ball downfield easily. Meanwhile, Wario is slow and lumbering, but capable of tackling anyone. Finding the perfect role for each character and creating a perfectly balanced team has been my favorite part of the experience so far.

Other Mario staples fit right into the soccer formula. Mario Kart-like items aren’t just fun to look at, but provide players some serious defensive tools. Using a red shell to chase down someone who’s about to score or dropping a banana peel right as someone’s about to tackle you feels even more satisfyingly sinister than hitting a first-place driver with a blue shell.

The game’s signature feature are “strike” shots. At random intervals, a glowing orb will land on the field. When a player reaches it, their entire team gets supercharged. By holding down A, time slows down and players will have to do two well-timed button presses to launch a special shot. If it goes in, it’s worth two points.

Strike shots are your typical Mario sports gimmick, but they add a lot of tension and urgency to matches than such tricks do in, say, Mario Tennis Aces. When a team gets supercharged, they’ll only have a limited amount of time to pull off a shot. That leads to a mad scramble where one team needs to get into a safe position to execute it fast, while the other needs to do everything in their power to stop them. Comebacks are much easier to obtain since every second counts, so every moment of a match becomes critical. I often found myself gripping my Switch so tightly that I feared I’d break it.

That all sounds promising, but if you’ve been following the Mario sports series in recent years, you probably know the catch already: There’s not much content here.

The Nintendo 64 sports titles give players more bang for their buck.

When you open Mario Strikers: Battle League, you’ll have the option to set up free-play matches, play online, and complete a short series of tournaments (the latter takes you to credits and lasts around five hours tops). That’s about everything the package has to offer in its launch state. That makes it one of the thinnest Mario sports releases to date, and that’s counting the already-light Mario Golf: Super Rush. The Nintendo 64 sports titles give players more bang for their buck.

It’s a similar story that we saw with Nintendo Switch Sports recently. That package is even more sparse, relying solely on its online play as its key feature. Similarly, Battle League wants players to spend their time playing with friends or partaking in the game’s very neat “Strikers Club” mode. That option allows friends to make their own club and compete against others in set seasons. It’s a smart idea to pull from FIFA, emphasizing the game’s high-stakes competitive gameplay and giving teams something to chase.

It’s not a mode you can easily hop in and play though. According to the game’s fine print, there are several circumstances that prevent players from hopping in casually. Seasons last one week, with an off week afterwards. If a team is created less than an hour before a season starts, it can’t compete until the next one. If no players on a team have been online in 90 days, that can also prevent a team from joining a new season. The idea of not being able to play the mode for two weeks because of a rule like that seems overly restrictive when Strikers Club is one-third of the entire content offering in the game.

It’s all part of a discouraging trend for Nintendo, which seems to be all-in on long-term games that hook players with a slow and uncertain DLC rollout. Battle League will receive free content, which will add characters to its currently miniscule roster (10 characters at launch with no unlockables), but it’s unclear if anything substantial will get added otherwise. There simply aren’t a lot of ways to show off your skills outside of online play, and that’s a far cry from the heyday of the golden age of Mario sports.

That thin structure might work better if the game were a free-to-play release, but it’s not an easy sell for a full retail game in 2022. Mario Strikers: Battle League feels great, and I want a good reason to keep playing, just as I wanted more excuses to keep up with Mario Golf: Super Rush, Nintendo Switch Sports, Mario Party Superstars, Big Brain Academy: Brain vs. Brain, and and others. The fact that I can rattle off that many games with the same problem shows that Nintendo isn’t protecting its Achilles’ heel well enough.

Mario Strikers: Battle League is the latest in a long line of potentially great Switch games let down by sparse launch content. Strikers Club makes for a compelling competitive hook, but there’s very little to do in its off-seasons right now. That’s a shame, because the core soccer experience here is terrific. Matches are tense, team play is incredibly nuanced, and its Mushroom Kingdom cast shows more character than ever. Hopefully, a steady DLC rollout can liven the experience up over time, but Nintendo has yet to prove that it knows how to score with long-term support.

Stick with FIFA if you want a dedicated soccer experience with lots of depth. If you just want a light multiplayer sports game on Switch, Nintendo Switch Sports is ultimately a better package at present (though its soccer isn’t very good).

You’ll get five hours or so out of the tutorial and primary tournaments. After that, it depends on how much time you want to spend online in club matches or partying it up with friends.

No. Mario Strikers: Battle League sports strong central mechanics, but you’re better off waiting for a few rounds of DLC to come in before paying full retail for a game that’s too thin at launch.

Mario Strikers: Battle League was tested on a Nintendo Switch OLED in handheld mode and on a TCL 6-Series R635 when docked.

The best Apple Watch bands and straps for 2022: The best for all budgets