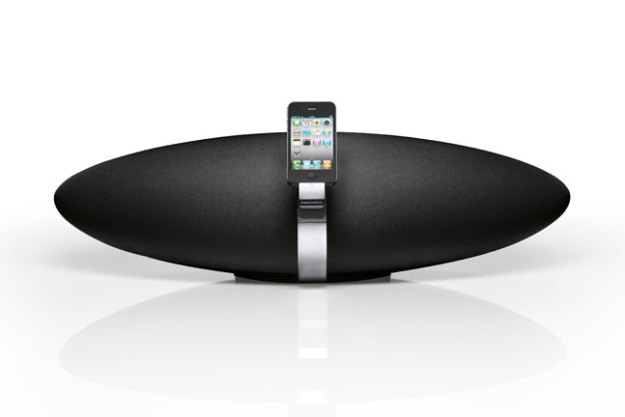 “The Zeppelin Air offers exceptional sound quality for an iPod dock, has a look that screams for attention, and is made by the Ferrari of home audio, Bowers & Wilkins.”

Shaped like the iconic flying airships of our past, the Bowers & Wilkins Zeppelin Air is designed to make a statement, both aesthetically and acoustically. The original Bowers & Wilkins Zeppelin entered our offices more than three years ago and has remained a company favorite ever since. Like the original, this new iteration raises the bar (and the price tag) of high-end iPod docks, by incorporating Apple’s new Airplay technology into the system, allowing you to wirelessly stream music from your computer, iPad, iPod or iPhone to the Zeppelin Air. Other subtle changes between the Zeppelin Air and the original include updated drivers and a better internal amp. So the question everyone will need to decide is whether the Zeppelin Air is really worth the $599 price tag.

A few years ago, we would have been blown away by the loud design of the Bowers & Wilkins Zeppelin Air, but today there are literally hundreds of iPod docks to choose from which offer some sort of outlandish look begging for attention. Measuring a little over two feet in length, the Zeppelin Air isn’t your typical desktop iPod dock. Housed in a glossy black finish and wrapped in nylon cloth, the five drivers housed within are hidden from view, with the only hint of their power being the large 2.5 inch ports located on the back of the Zeppelin. There is an arching faux chrome arm which swings up in front and acts as the dock for your Apple iPod, iPad or iPhone. For $599, we wish the chrome on this arm and the egg-shaped remote control was real and not plastic. On the back of the Zeppelin Air is a power input, Ethernet input, USB, Auxiliary and composite audio inputs.

There are some key differences between the Bowers & Wilkins Zeppelin Air and the original Zeppelin speaker dock we reviewed three years ago. The new Zeppelin Air uses a new 1-inch Nautilus tube aluminum tweeter, instead of a metal dome tweeter . It also uses two smaller, 3-inch midrange drivers instead of the 3.5-inch found in the original Zeppelin. This time around, there are five separate amps driving all five speakers, instead of three amps powering five speakers. Bowers & Wilkins has added a new Analog Devices AD1936 DAC (digital to analog convertor) and Analog Devices ADAU1445 DSP (Digital Signal processor) which upsamples the audio stream to 24-bits (CD Audio is typically 16-bit) and a 96Khz sampling rate. So what does that all mean? Well according to Bowers & Wilkins, the new Zeppelin Air has better sound and is lighter than its predecessor. But between us, we can’t really tell the difference too much as (let’s get real, this is a speaker dock, not a floor-standing speaker system) both systems sound great.

As we mentioned before, the included RF remote control looks great. It’s easy to handle, and includes controls for play and pause, skip forward and backward, volume, power and input select (dock, aux, USB, Airplay). Unfortunately the remote control attracts fingerprints on the backside where the faux plastic chrome is. Real chrome would have attracted fingerprints too, but at least it would lend some heft to the remote as well, which we would have liked.

The Bowers & Wilkins Zeppelin Air is a little tricky to set up for Airplay use if you have a Windows system. The company does provide some nice detailed instructions, but unfortunately, they are meant more for Mac users with iTunes installed. Windows users running iTunes will need to improvise a little.

For starters, you need to connect the Zeppelin Air to your computer using the included Ethernet cable. Once that is done, type in the IP address which is given with your Zeppelin Air (in the instruction manual)and access the speaker system’s internal server settings so you can tell it how you will be connecting it to your network. In our case, we connected the Zeppelin Air over the office Wi-Fi network. Once our settings were keyed in, we were connected and ready for action.

The instructions for the Zeppelin Air point you to go to the preferences section of iTunes to enable and playback Airplay devices. However, if you have iTunes on a Windows PC, you will want to ignore these settings and click on the small box icon in the bottom right of iTunes to select the Zeppelin Air as the playback device.

Once setup is complete, you are able to stream music from your computer, iPad, iPhone and iPod as long as all of these devices are connected to your Wi-Fi network. We encountered no issues with playback, and found the wireless controls responsive enough — there is typically a one or two second delay after you hit the control on your device.

In our tests, the Zeppelin Air would not always connect to our Wi-Fi network, forcing us to unplug its power cable, plug it back in and restart the system. A quick search on the net shows that a lot of users are complaining about the Zeppelin’s Wi-Fi connectivity. Some people are claiming that the Zeppelin Air is finicky about the type of router you have, the security your Wi-Fi network is using, or just not liking the Wi-Fi password the user puts in (this sounds a bit odd to us). Bowers & Wilkins also does not include a phone number for their tech support department, forcing you to go to their website to track it down.

A couple times we experienced wireless interference where the song would break up and resume buffering, suggesting that you do not want to place the Zeppelin Air too far away from your Wi-Fi router (ours was down the hall). Bowers & Wilkins might want to increase the buffering to compensate for this.

We also noticed that when we paused the music using the Zeppelin remote and tried to unpause it, sometimes we would have to go back into our iPhone/iPod app or Pandora app and resume it from there.

For our testing, we used the Zeppelin Air with a third-generation iPod Nano, Apple iPhone 4, Apple iPad 2 and a new 27-inch iMac running Windows 7 and the latest version of iTunes. Musical selections included Tassoumaken by Issa Bagayogo, The E.N.D by Black Eyed Peas and World by Rodrigo y Gabriela.

For its diminutive footprint, the Zeppelin Air puts out some amazing sound; stereo imaging is great for a speaker system of this size. The mid range is warm and bass is much bigger and deeper than we thought it would be. In fact, if you put a blanket over the system to conceal its size, you would think you were listening to a set of nice bookshelf speakers. The bass gets a little hollow and boomy at higher volumes, but never bottoms out or goes flat which is great. Highs are a bit metallic, but otherwise sound great, and never overly bright.

If you have Pandora installed on your iPad or iPhone, you can choose the Zeppelin Air as the output device just like you would use the Apple music player. This is great for when you are hosting a party and want a great mix of music. Heck, let your friends connect their phone to your Wi-Fi network and share their music with everyone too.

In our tests, music streamed from Pandora did not sound as good as music streamed directly from your computer or iPhone. Keep in mind that Pandora’s 128bit compression passes through and is the cause of this.

So is the Bowers & Wilkins Zeppelin Air really worth the $599 price tag? Well, is a Ferrari really worth $250K? Both of these products are in a league of their own in some regards. Sure you are paying more for an incrementally better product, but value was never really part of B&W’s plan in the first place. The Zeppelin Air offers exceptional sound quality for an iPod dock, has a look that screams for attention, and is made by the Ferrari of home audio, Bowers & Wilkins. If you are looking for an iPod dock that is a little more affordable and can do without the Airplay technology, check out the Edifier Lena 5 Encore iF500 (which resembles a hot air balloon, coincidently) and the Altec Lansing MIX iMT800 which both offer outstanding sound quality.