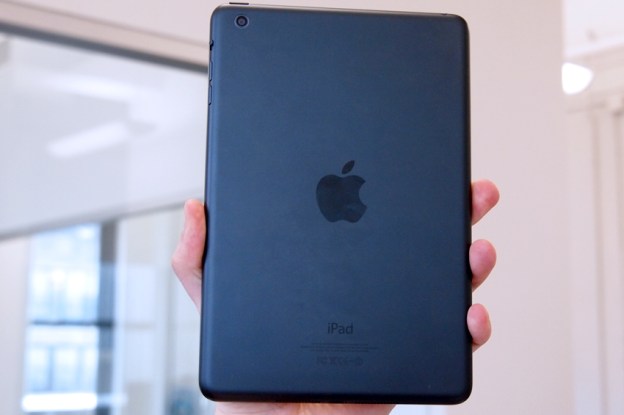 Holding off picking up an iPad Mini because it doesn’t have a Retina display? If so, the wait could be over later this year, when Apple is said to be fitting one of its high resolution, high pixel density screens to everyone’s favorite $330-plus, “budget” tablet. Although not confirmed by Apple (obviously), the news comes from an analyst at NPD DisplaySearch, who told CNet the 7.9-inch screens would enter mass production in June or July, then fitted to the iPad Mini 2 ready for release in the fall. This isn’t the first time we’ve heard such talk, as a similar release schedule was hinted at in March, plus it’s the logical time for an update as October will mark the iPad Mini’s one-year anniversary.

The iPad Mini currently has a 7.9-inch screen with a resolution of 1024 x 768, which is equal to the original full-size iPad, and a feature which was criticized upon the announcement of the small tablet last year. It hasn’t bothered many customers though, as the iPad Mini has proven to be another sales hit for Apple.

However, there will be more than a few people waiting for the inevitable sequel, and the addition of a Retina display has always been one of the most obvious (and anticipated) upgrades. According to NPD DisplaySearch, it’s LG Display which has been charged with producing the panel, and that when it does arrive, it will have the same 2048 x 1536 pixel resolution as its big brother, giving an approximate pixel density of 324ppi. As a comparison, this obliterates the Mini’s 162ppi, and brings it closer to the iPhone 5‘s 326ppi, and the iPad’s 263ppi.

Provided all this speculation comes true, the Retina-equipped iPad Mini will be announced and released during the third quarter of 2013, which makes it one of the, “amazing” products teased by Apple CEO Tim Cook during its last earnings call. The rumor doesn’t end there either, as apparently, there will be another iPad Mini along in the first quarter of 2014, and it’ll have a new processor inside. We’re not sure about that, as releasing one all-new model sounds more sensible, but still wouldn’t put it past Apple to pull the same trick it did with the iPad 3 and iPad 4 all over again.