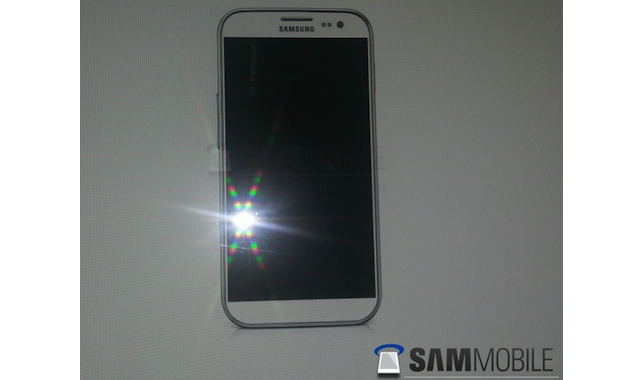 The release of the Samsung Galaxy S4 is as inevitable as the release of another iPhone, it’s just a question of when it will happen. We may not know exactly when it’ll arrive, but as the leak of a picture supposedly showing the phone reminds us, that time is getting ever closer.

You can see the image above, and at first glance it looks a lot like the Galaxy S3, except for one major alteration – the home button beneath the screen has disappeared. It’s not the first Android phone to do away with physical keys, nor is it the first Samsung produced phone to do so either; but it is a considerable departure from the S3. Home button aside, eagle-eyed Samsung fans will notice the bezel around the screen looks much thinner than it does on the S3, while the top and the bottom of the frame are flatter than the S3 too. This could be seen as a risky design move, given it deviates from the curvy, lawsuit-avoiding shape of the previous model.

One of the most enduring rumors regarding the Galaxy S4’s specification is an increase in screen size, possibly to 4.99-inches, plus the introduction of a 1080p resolution. The smaller bezel adds weight to this, as it negates the need for Samsung to make the chassis much larger to compensate. The rumored spec continues with a 2GHz processor, 2GB of RAM, a 13-megapixel camera and Android 4.2.

The leaked picture has been published by Samsung blog SamMobile, and due to the anonymous nature of the leak, it’s impossible to confirm whether the image is genuine or not. On the plus side, the picture isn’t ridiculously over-the-top – it doesn’t have a very bendy screen or lasers for example – but it does look an awful lot like the Galaxy Premier and the Galaxy Grand.

So, is it a carefully doctored picture, or will the S4 be visually similar to its fellow Galaxy phones? We’ve probably got a few months to go before we find out, as despite talk of both a CES 2013 and an MWC 2013 appearance, Samsung is likely to hold a flashy launch event dedicated to the S4 sometime after both these shows have finished.